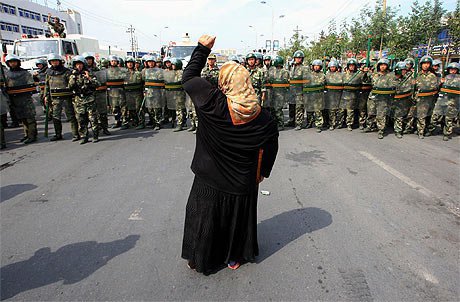 The Angel and the Man work for Unity

Satan and the Women for Division.

When the Algerian war for independence broke out in 1954, women joined the ranks of those fighting for freedom. Men’s attitudes to women changed, as the role of these women in the fight was honoured and encouraged. For the first time it seemed that women and men were living on equal terms. Grand promises were made that when Algeria attained its independence, women would be included into all aspects of society on equal terms. At least that is what women understood.

Women challenged the systems of oppression that had constrained their lives, not only through their active participation in the war, but in the novels they wrote and stories they told. Women took their place in the shared desire for change and worked as one with their men.

Anticipated freedoms for women dissipated with independence. The promises were forgotten. The gains of freedom that they assumed would be enshrined in the new nation were dismissed. Women were silenced, pushed back to the private world, imprisoned in the social structures that had not been shaken by their participation in the struggle for independence.

Women who participated in Egypt’s recent revolution tell a similar story. They stood in Tahrir Square, together with their male colleagues and countrymen, challenging the oppressive regime that hung as a cloud over the lives of all citizens.

Hoda Badran, chairwoman of the Alliance for Arab Women and a former senior UN official, commented: “Women went out to Tahrir Square, women participated in planning the revolution… They cleaned the square, they nursed the wounded, they also were killed when people in the square were shot. But after the revolution we notice that there are decisions that are being taken to exclude women… We expected this revolution is going to include women as much as it includes men, in terms of liberty, in terms of equality, in terms of social justice. Apparently it is not.[1]”

But this is not just the story of our Muslim sisters.

Young Lee Hertig, in ‘Without a face: The Nineteenth Century Bible-Woman and Twentieth Century Female Jeondosa’, describes the pioneering and sacrificial role played by the early Bible Women in the development of the Korean Church. She says they were the cultural, linguistic and social brokers in evangelism whose work saw the rapid spread of Christianity across Korean in the early twentieth century. However she laments that ‘the institutionalisation of the church structures created a lag between women’s participation and equal opportunity… what was initially a liberating role for Korean women became stilted and confining once the patriarchal system reasserted itself in the church.[2]”

This story is repeated over and over.

In the book, Putting Names with Faces, edited by Christine Lienemann-Perrin, Atola Longkumer and Afrie Congco Joye, stories are told from across the globe that demonstrate the way women, both as subjects and agents in mission, have been silenced in the records.

While women have been at the forefront of transmitting the gospel, their contribution has been hidden in the story of Christianity. Lienemann-Perrin writes: “Through all centuries and continents various divisions have been the core stumbling block for women seeking access to the transmission and/or appropriation of Christian faith. They were caused, among others, by culture, Bible interpretation, gender rules, class barriers, and labor rules.[3]”

When Women’s Mission Boards were merged and integrated with the General Boards at the start of the twentieth century, women were assured that they would be “represented in decision-making structures and that their concerns would be acknowledged and served in the new ‘integrated’ structures.[4]”

Those promises dissipated with the morning mist in the renewed structures of mission. Ross laments the outcome: the silencing of women and their contribution to mission, both at the missiological and strategic levels[5].

There is a lack of hard data to support assertions that women have been the missionaries pioneering the way for gospel transformation in the most difficult places. David Barrett and Todd Johnson statistics say that 54% of missionaries were men and 46% women[6]. These figures don’t seem to represent the reality on the ground, or the story of history[7]. Up to 1938, from Australia alone, 193 single women joined the China Inland Mission compared with 144 men, many of whom were married[8]. The mission that is today called Interserve, was an all-women’s mission for its first 100 years, pioneering single women serving in the sub-continent. In 2002 Frontiers reported that 75% of respondents for its short-term mission teams in the Muslim world were women[9]. Women have been the least recognised ground-breaking pioneers of mission, able to go where men so often can’t.

There is overlap in these stories; whether it’s women participating in the fight for independence, protests for regime change or the transmission of the gospel. When the issue becomes institutionalised in the public square, women are routinely excluded. Their contribution is forgotten. History is rewritten. The future is imagined on just a part of reality.

The Gospel of Luke speaks to the role of mission, of the Church, as one of healing, restoring, saving, liberating, comforting, saying no to injustice, oppression, dehumanizing, hatred and discrimination[10]. It calls for the recognition of women and the inclusion of their contribution in the work of the church and mission. This is the transformative work of the gospel in the church and society.

And it goes further. Not only do we act in transformative ways for the inclusion of women’s contribution in the Church and mission, we walk with our Muslims sisters who have contributed to transformation in their state and society so that they are not forgotten; so that the entrenched structures that demean them and their work are transformed; so that states, societies, churches and missions becomes agents and subjects of the transforming work of the gospel.