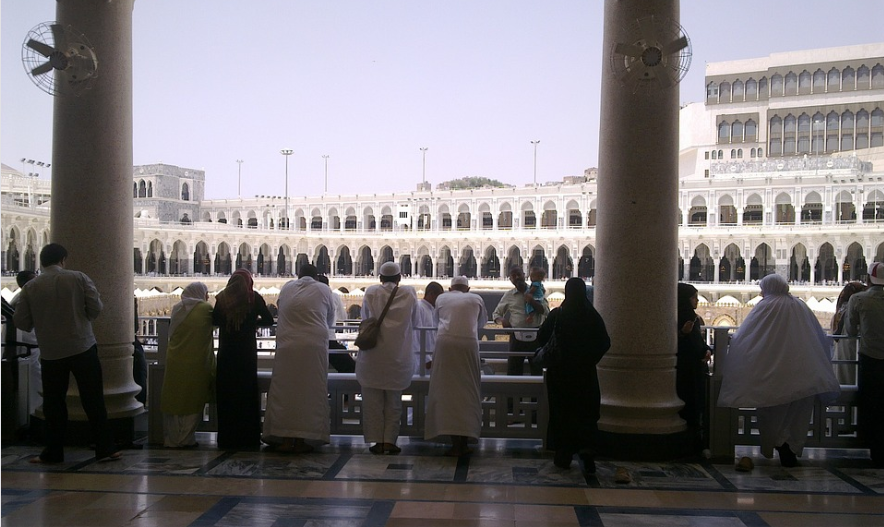 It was about 1pm, the time for Friday prayer, on Friday 18th March, 2005. The Muslim community lined up in orderly rows, following the leader in standing, bowing, prostrating, as they murmured the well-known Arabic phrases accompanying every movement. But this Friday prayer was different. Women and men stood together in the lines. While some of the women were modestly dressed, others were unscarved and with tight-fitting clothes. A woman had sounded the call to prayer. And most controversially, it was a woman out the front, leading the mixed Muslim group of 80-100 women and men in community prayers. The leader was Dr. Amina Wudud. The call to prayer was given by Suheyla Al-Attar, and the gathering took place in a building belonging to the Episcopal Cathedral of St. John the Divine in New York, after three mosques had refused to host it, and a gallery withdrew its offer following a bomb threat.[i]

While rites of passage (also called rites of transformation) mark people’s transition from one stage of life to another, there is another kind of ritual known as rites of solidarity or rites of intensification. These rituals are about community welfare rather than the individual, and are designed to reinforce communal values and social identity.   Based around calendar times they may be weekly (Friday prayer, Sunday worship services), Rituals of renewal are sometimes subsumed under rites of solidarity. They are performed at times of crisis, and are designed to revive or renew the environment or broken social relationships. Examples include the zar ceremony[ii] in the Horn of Africa and adjacent parts of the Middle East, and the istisqa prayers for rain.

Many of the rites of solidarity take place in official religious times and spaces, and are often characterised by the leadership of men. However the gender separation around rites of passage and of intensification is not clear-cut. As the 2005 prayers led by Amina Wadud showed, some women are challenging men’s hold on official space, by leading mixed prayer or giving the khutba sermon at Friday prayers.[iii] While these incursions are happening primarily in western contexts, there are women in Muslim countries who privately endorse them and point to supporting hadith.[iv] In different parts of the Muslim world women may be allowed to recite the Qur’an publicly, or at funerals or gravesides. In some countries both women and men share in monthly meetings around a meal and making donations into a common fund, but in many places it is more often women who are involved.

Most commonly, both women and men have parallel roles in rituals. If women are present at birth, it is a man (usually the father) who recites the adhan call to prayer in the ear of the newborn. The groom and the bride’s father sign the official papers at a wedding, while the women may be more involved in the choice of bride, and the celebration. When women and men pray salah or dhikr prayer in separate groups, a man leads the men, and a woman can lead the women in prayer. In China in some regions the Hui Muslims have separate mosques for women and for men. It is usually women in the community who do the cooking for the shared meal which is an essential part of many official celebrations and rites of passage.

As with rites of passage, looking at the rituals and symbols in rites of solidarity helps us learn what characteristics a group values as part of their communal social identity. Friday prayers highlight group religious unity, and also gender separation. Ramadan break-fast meals, like western Christmas, emphasise family meal-sharing. Unlike Christmas, Ramadan also evokes the importance of discipline through communal fasting. People meeting around recitation of the Qur’an invoke the belief in the blessing or power conferred on people and place through its recitation. Dhikr gatherings may celebrate a sense of ecstatic union with the divine that goes beyond set words and actions. Celebrating the birth date of a saint affirms their local links, together with the power they possessed that can be accessed by their followers.

As a new community of faith emerges, rites of intensification around sacred Scriptures, shared prayer and other pious activities will be part of their gatherings. Like rites of passage, they become an important part of discipleship both of the community and of its individual members. We can explore existing religious rites of intensification within the community or near neighbours, and the part they play in community formation. Importantly we need to ask what communal values we want to affirm, and what rites and symbols will express this. Symbols and rituals may communicate different things in different cultural contexts. The characteristics that are valued as evidence of personal and communal maturity may also look different in other cultural contexts.[v] Communities living in diaspora contexts away from their home country and culture will choose different rites of passage and symbols to keep and to let go. Similarly, gatherings of followers of the Messiah that are coming into existence in new contexts will work out what rites of solidarity will look like that will best express and build their faith as a new community.

In Kazakstan a group of Uighur Christian women, of different ages and from different churches, started a tea group. Like the traditional women’s tea groups, they included a money exchange. However when it caused relational problems for people who couldn’t pay back, they dropped the exchange. Anne Jansen describes how the group continued their meetings:

“When there was a decision to be made, everyone had her say. The final decision rested with the more mature (not necessarily the oldest). These teas were six-hour parties where we ate, sang, danced, told stories and testimonies, read from the Bible, prayed and ate some more.”[vi]

Every community develops its own rituals and patterns of doing things, intentionally or otherwise. Whether women and men meet separately or together, we need to consider what part they play in the community and gatherings, the meaning carried by the symbols and rituals, and what this expresses about the nature of the Messianic community. Rites of solidarity are an important part of forming the new communities, grounding the communal values into the lives and hearts of its members and gatherings.

[iii] Again Amina Wadud was a pioneer in this, giving a Friday khutba sermon in Cape Town, South Africa, in August 1994. Since then her example in giving the khutba and leading mixed prayer has been followed by other Muslim women in the west.

[iv] A hadith from Abu Dawud records Muhammad giving Umm Waraqah permission to lead the people of her household in prayer. However those who oppose female leadership of mixed prayer argue that she only led the females in her household, or alternatively that the permission was given to her as an isolated case.

Previous Post
Life Transitions & Rites of Passage
Next Post
The Church in change: Liminality and the importance of ritual in welcoming new believers. A local church response.