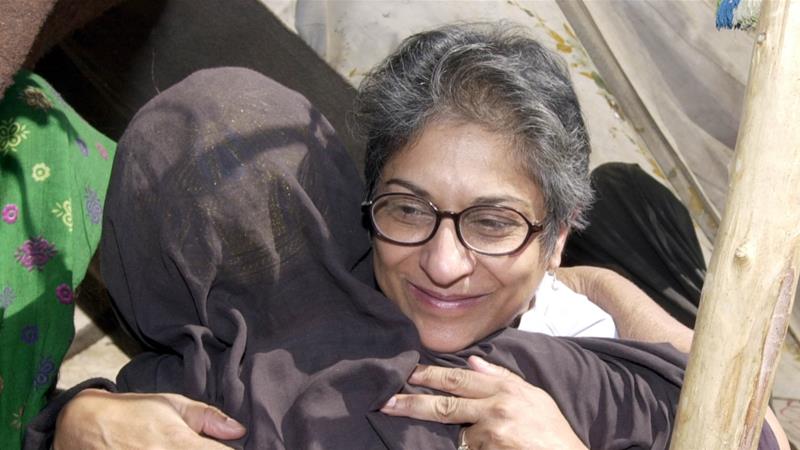 Human Rights lawyer, Asma Jahangir, is known for ‘speaking truth to power’, for defending the weak and marginalised, and women and minorities against injustice. Asma Jahangir passed away on 11 February, 2018 in Lahore, and the nation of Pakistan, and many around the world, mourn the loss of this champion of justice and human rights. At her funeral in Lahore women joined men in her funeral prayers, Christians joined Muslims, poor joined rich. One Pakistani woman journalist described the legacy that was evident at her funeral like this: People don’t usually break societal barriers and disrupt the patriarchal order at funerals anywhere in the world, let alone in Pakistan. But on February 13, many women in Lahore, including myself, did just that by actively participating in a janaza, a Muslim funeral ritual, for the first time.On that day, contrary to orthodox funeral traditions observed in Pakistan, we not only stood alongside men, we actually stood in front of them. Also, there were hardly any frowns directed at women who chose not to cover their heads.(1) Asma Jahangir continued to subvert cultural and religious norms, even in her death.

Why write about this woman from Lahore in Pakistan? It is true that she has received many accolades and much acclaim internationally as well as at home. It is also true that she paid a high price for fighting for justice for the least. She has been jailed, kept under house arrest, threatened, beaten, had enormous amounts of vitriol poured out against her, and often walked a lonely road. At her funeral the father of a young man who was forcibly disappeared faced the devastation of the attorney for his son being buried. Acid attack victims, victims of other forms of domestic violence, Christian minorities, the weak and vulnerable all stood bewildered, who would now fight on their behalf?

I personally feel Asma Jahangir’s passing deeply. When I did my research on women’s activism in Pakistan, so many roads led back to individuals like her. She, like many of the other women activists I interviewed, had a profound love for ‘doing justice’ that they enacted in uncompromising challenge of the powers arrayed against justice for the least.

I feel her loss because she lived what it is to ‘do justice’, at least one very real and visible manifestation of that. I have often quoted the verse from Micah 6:8 “He has shown you, O mortal, what is good. And what does the Lord require of you? To act justly and to love mercy and to walk humbly with your God”. I aspire live that out, but really I am not sure how much I really live ‘doing justice’.

I have learned some things from the life of this truly remarkable woman about what it is to do justice. For Asma Jahangir it involved human rights – the rights of prisoners, of women, of bonded labourers, of children and of minorities. Her vision of doing justice can be seen here. What is doing justice in the community where I/we engage with women, with Muslim women? It must be more than just not doing anything bad.

The Qur’an exhorts its followers to justice. “We sent aforetime our messengers with clear Signs and sent down with them the Book and the Balance, that men may stand forth in Justice.” [Sura 57:25] “O ye who believe! Stand out firmly for justice, as witnesses to Allah, even as against yourselves, or your parents, or your kin, and whether it be (against) rich or poor: for Allah can best protect both. Follow not the lusts (of your hearts), lest ye swerve, and if ye distort (justice) or decline to do justice, verily Allah is well-acquainted with all that ye do.” [Sura 4:135] “Allah commands justice, the doing of good, and liberality to kith and kin, and He forbids all shameful deeds, and injustice and rebellion: He instructs you, that you may receive admonition.” (Sura 16:90)

This exhortation to justice, which is also described by some as a moral virtue, has been defined as putting everything in its rightful place that is seen in equal treatment for all, though it does not mean equality.(2) It means protecting the rights of others, being fair and just toward all, standing with the oppressed, the orphan, the widow. ‘The Just’ is one of the names of God, but it is not a name found in the Qur’an, rather it comes from traditions.

As a follower of Jesus the Messiah, I believe justice flows from the heart and character of God and is interwoven with God’s shalom, his wholeness, the way things were created by God to be. It is everything woven together, God and man and all of creation, to create flourishing and wholeness for all.

Justice is not private morality. It is the public expression and acts of wholeness in community and all of creation through caring for the poor and marginalised, the broken and disenfranchised, the excluded and those boarded ‘other’, and challenging social structures that embed the brokenness that prevents flourishing and wholeness.

The Bible speaks extensively about justice. “Learn to do right; seek justice. Defend the oppressed.” (Isaiah 1:17) Behold my servant, whom I uphold, my chosen, in whom my soul delights; I have put my Spirit upon him; he will bring forth justice to the nations. He will not cry aloud or lift up his voice, or make it heard in the street; a bruised reed he will not break, and a faintly burning wick he will not quench; he will faithfully bring forth justice. He will not grow faint or be discouraged till he has established justice in the earth; and the coastlands wait for his law. Thus says God, the Lord, who created the heavens and stretched them out, who spread out the earth and what comes from it, who gives breath to the people on it and spirit to those who walk in it: … (Isaiah 42:1-9) For I the Lord love justice; I hate robbery and wrong; I will faithfully give them their recompense, and I will make an everlasting covenant with them. (Isaiah 61:8) “Judge not, and you will not be judged; condemn not, and you will not be condemned; forgive, and you will be forgiven.” (Luke 6:37) “You have heard that it was said, ‘Eye for eye, and tooth for tooth.’ But I tell you, do not resist an evil person. If anyone slaps you on the right cheek, turn to them the other cheek also.” (Matthew 5:38,39)

Asma Jahangir challenges me to think about what it means to do justice. Domestic violence, sexual abuse, female genital mutilation, honour crimes, economic poverty and exclusion, social poverty and exclusion, lack of education for girls, high maternal mortality rates because women have less access to health resources, violence perpetrated against minorities of any religion … these and many more are justice issues for those, often for women, in the communities where we work.

Confronted by Asma Jahangir’s passing this week I am forced to ask of myself, how will I ‘do justice’l How am I identifying the brokenness of my community and bringing God’s shalom/ wholeness for the whole community? For me, that’s the Kingdom of God come among us when God’s shalom is seen.

Oh, and one other thing, what would it take to work with women like Asma Jahangir, Muslim women who are ‘doing justice’?

Previous Post
Dhikr: in the heart of faith
Next Post
When the Lights go Down in the City: A Reflection on the Season’s Passing
Close