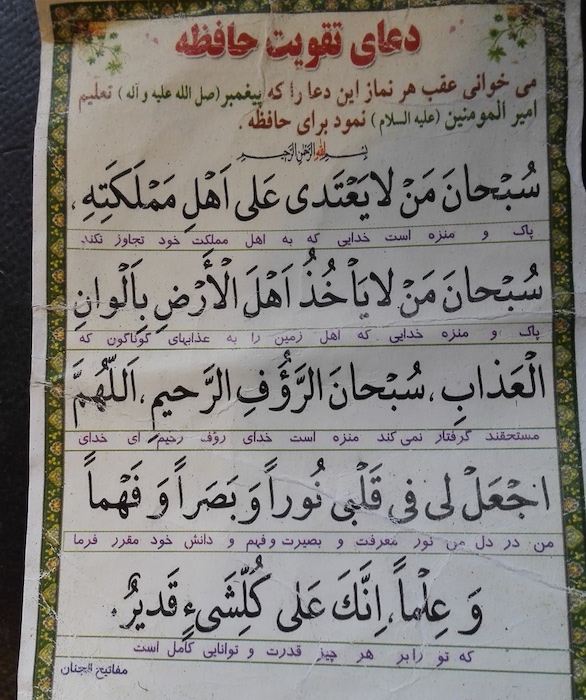 There were oddments left among the wet clothes jettisoned by refugees arriving by boat across the narrow strait from Turkey to the Greek islands: a tiny torch, a few coins, a phone card. Among them was a small card, plastic-wrapped, but showing wear from its journey, closely-written in Arabic with Farsi inter-linear translation. A card of du‛a (supplication), it included an invocation from ‘Mafatih al-Jinan’[1] and the protective ‘throne verse’[2]. Poignant in its context of dangerous flight and hope, the card was typical of the cards and small booklets containing prayers of appeal that can be found everywhere in Muslim communities.

Du’a is universal across the Muslim world, but there is surprisingly little about it in writings on Islam. Incorporated into the formal salah (liturgical prayer), du‛a finds its way also into every part of life. It is not as bounded by rules of purity and language as salah, not as controversial as dhikr (repetitive prayer). It includes invocations for rewards in the next life, but is perhaps even more important for seeking power and protection for the needs of this life. Hence it has an important place in the lives and practices of Muslim women, who must find a way to access divine power to fulfill their responsibilities for family harmony and welfare, amid the restrictions of bodily purity which are so weighted against women. Written, recited or spontaneously uttered, du‛a voices the piety and deep desires of women and men across the Muslim world.

While du‛a can happen anywhere, some conditions make it more effective, more likely to elicit a favourable divine response. These conditions include where the du‛a is prayed. I have seen women and also men gathering at shrines from Syria to Sumatra, murmuring prayers from the booklets that are usually in a small pile for the visitor seeking extra efficacy or baraka (blessing) from the holy person buried there. A da‘iyya (Muslim teacher) told me of her father standing at the Ka‘bah at Mecca as he prayed that his children would become teachers of Islam. In addition to places, there are particular times of power. The Night of Power near the end of the month of Ramadan is well known as a night when petitions are answered. Mornings (daybreak) and evenings are often quoted as times to recite prayers, often a set number of repetitions (three times in the evening, or ten or a hundred times in the morning and in the evening; or thirty-three times and thirty-four for the culminating invocation). Particular days or months may have their associated invocations and attendant rewards.

While du‛a can be in any language, use of Arabic is believed to enhance its potency. So booklets and cards will often include the Arabic with its translation and sometimes transliteration for the non-Arabic speaker.[3] Actions may also contribute. Drinking water from the spring of Zamzam at Mecca is said to carry extra efficacy. One prayer is to be ‘read three times when you lie down, placing your right hand under your right cheek’. (Al-Husaynaan, 2006:134) Du‘a is most often said with hands spread out, palms up, or cupped, to receive blessing: and the hands are often wiped over the worshipper’s face at the end, as a physical application of blessing. The prayer for rain (salah al-istisqa – usually part of public prayer) may be performed with raised hands and the outer garments of the petitioners turned inside out, following the example of Muhammad, Prophet of Islam.

Du’a are generally related to particular situations, more often than for specific needs. Thus invocations are prescribed for an extensive category of occasions such as entering and leaving the bathroom, putting on new clothes or undressing, when it thunders, or the new moon is sighted, when travelling, when you hear a dog bark, or when you see the first dates of the new season.

More widespread use is made of ‘taking refuge’ from lurking dangers encountered. This finds Qur’anic authority in Al-Nahl Q16:98: “and when you recite the Qur’an seek refuge with God from Satan the accursed.” (Also Al-Falaq Q113:1 and Al-Nas Q114:1, the last two, frequently-quoted chapters of the Qur’an.) It occurs frequently in the books of recommended du‛a.   Padwick describes it as the ‘cry of frightened humanity’ … ‘in a demon-haunted world, in a world … where the evil eye is to be feared as well as the attacks of less uncanny human enemies’ (1961:97). ‘Taking refuge’ is heard in formal salah as well as the exclamation of the ordinary person in the street who has a fright. Some of the perils from which the worshipper seeks refuge in God include: ‘the evil of the whisperer who withdraws,’ ‘ the evil of today and the days after it, laziness and old age, the punishment of hellfire and the grave’ and similarly, ‘ the grave and its torture,’ ‘the evil of my soul and the evil of the devil and his helpers,’ and ‘the evil of the created world’ (Al-Qahtani 1996). Other times to take refuge are at the conclusion of salah (as well as its beginning), going into the mosque, in the evening, before going to sleep (Al-Husaynaan 2006).

Du’a can go also beyond formal phrases, repetitions, and conditions of purity and pious practice, to express the inner hopes of the petitioner, whether in Arabic, another language, or the most inarticulate expressions of heart longing. In this, as well as all the varied contexts in which it is prescribed, du‛a recognises the possibility of God who is present to, and who may intervene in, every part of our lives as we seek Him.

This is the God encountered in the Bible – who heard and responded to the heart-felt petitions of Hagar, destitute with no means of caring for her son: of Hannah, longing for a child of her own: of widows who had lost their only sons.[4] In Jesus we meet someone who was always accessible to those who came to him for help, available with healing power for both women and men, no matter how socially peripheral they were: an old hunchback, a defiled and anaemic woman, a foreigner with a devil-possessed daughter, a spurned woman from his people’s adversaries.[5]

Often Muslim friends ask us to pray (petition) for them. They may also make it reciprocal: “and I’ll pray (petition) for you.” So we pray to our Father who is always accessible, regardless of our state of purity or the language in which we speak, and as we do so, the presence of God in peace or power can be almost palpable to those on whose behalf we petition.

The bodies and voices of Muslim women can be viewed as unsafe, part of their ‘awrah,[6] that which needs to be hidden away. A friend of mine believed that Jesus could not have become fully human in all the messiness of a woman’s womb and childbirth, because it was unclean. Yet God in the incarnation of Jesus Messiah makes woman’s body, previously viewed as defiled and defiling, to be the bearer of His full presence and glory. So too in the Messiah, God honours and dignifies the voices of women by his attentiveness and response to their du‛a.

[1] Mafatih al-Jinan (Keys to Heavens) by Shaikh Abbass Qumi is a Twelver Shi’a compilation of selected passages from the Quran, and other well-known supplications and verses from Shi’a literature.

[3] About 20% of Muslims speak Arabic as their mother tongue.

[6] Malti-Douglas notes that “In literary Arabic, this word signifies at the same time something shameful, defective and imperfect; the genitals; and something that must be covered:” and cites Ibn Hanbal’s declaration: “Everything in woman is an ‘awra.” (1991:121, 127)