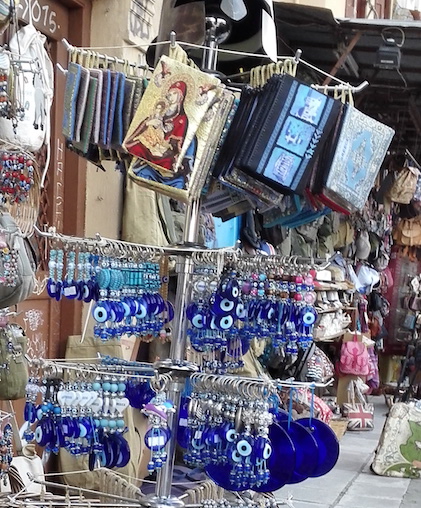 Walking along the road in a Middle Eastern rural town, I passed a woman sitting on the pavement, selling greens from her basket, her baby on her lap. I smiled at the child. It was a hot day, and the woman raised the back of her hand to wipe her forehead. It could have been to wipe the sweat off: but in this context she was using the palm of her hand to avert any potential evil that might come from me smiling at and admiring her child.

In another region, as we joined in the seventh-day celebration for the new-born baby of our neighbour’s relatives, the aunt took a piece of paper and tore it into the rough shape of a figure. She took a pin and began piercing the paper doll, “Against the eye of Ahmed; against the eye of Fatima; against the eye of Mariam…” and we heard our own names in the list. It was not an ascription of evil intent to us, but rather protection for the baby from involuntary harm.

These experiences are common for people living in the Middle East and Central Asia. Fear of envy, which expresses its potency in the evil eye, is deeply rooted, and found among the wealthy and highly educated as much as among those who have less. It spreads right around the Mediterranean, through the Balkans, and has found its way to Latin America via the Spanish. As the last blog post noted, the blue bead and amulets are used as protection, along with blue-painted fixtures on houses, or invocations of God’s name, whether written or spoken.

Medieval European herbalists listed herbs which could protect against the evil eye (as do contemporary wiccan ones). The link between envy and sorcery can be found in countries around the world, although it is not always associated with the evil eye.   In many societies, young boys will be dressed as girls, with long hair, as a way of tricking, and protecting them from, envious or evil spirits that could harm them.

The use of envy against people with good fortune (beauty, wealth or possessions) derives from an understanding of ‘limited good’ in society. If there is only so much wealth or good fortune to go around, then if one person is particularly well off or advantaged, others will be worse off. Thus envy acts as a levelling force, so that no one person prospers at the expense of others.

In the Coptic Orthodox book of daily prayers, the Prayer of Thanksgiving (which is repeated seven times daily along with the Lord’s Prayer) places ‘envy’ at the beginning of a list of surrounding dangers from which the supplicant asks God’s protection: “All envy, all trials, all the work of Satan, the counsel of wicked men, and the rising up of enemies, hidden and manifest, take them away from us, and from all Your people, and from this holy place that is Yours.” In a world that often involves war or physical attacks, envy is a most common danger.[1] 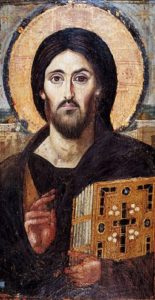 By the time of the New Testament, the link between envy and the evil eye was more developed. It is found in the inter-testamental writings, as well as in specific references like Mark 7:22, where the evil eye is listed among the evils that come from a human heart and pollute a person. And in Matthew 20:15, the landowner asks the grumbling labourers, “Is your eye evil because I am good?” (NRSV translates it, “Are you envious because I am generous?”).[2]

How does the Bible help us respond to this pervasive fear of envy and its ill effects?   Envy is a negative force, biased towards failure and poverty. It finds an opposite parallel in blessing (baraka) which is a success-biased force (Douglas 1966:110). Baraka also carries the meaning of ‘power’, and God’s blessing is effective against the fear that can permeate the lives of people.

My instinct when I met someone with a young child was always to verbally admire him or her: I quickly learned in the Middle East that this was a very anti-social act. If anything adverse happened to the child, I would be held responsible for causing it through my admiration. But we don’t have to be restricted to protective invocations murmured over the child. The Bible doesn’t call us to admire: it does call us to bless. We can ask God’s blessing over people, their families, a new car or home. In doing this, we are actively invoking God’s good for the situation in which we find ourselves, not just seeking to avert evil. And the blessing and protection of God’s name is potent against any kind of evil.

Seeking God’s blessing also reminds us that we do not live in a world of limited good. God’s blessing is extravagant, for fertility and flourishing, from the first chapter of Genesis. And it is demonstrated anew in the life of Jesus the Messiah – feeding thousands with a few loaves and fishes and with baskets of food left over, telling stories of paying people lavishly for just a few hours work.   These narratives of generosity culminate in an act of costly self-giving that offers life to all.

God’s baraka / blessing offers protection in a world of envy and fear. And it tells us of a world where envy is robbed of its power, of a world so characterised by self-giving and abundance through Jesus the Messiah, that envy has no place, no need of levelling, for there is no limitation on God’s goodness offered freely for all.

[1] It finds interesting overtones in Rene Girard’s contemporary theory of mimetic desire, leading to rivalry for a restricted object of shared interest, and to conflict, violence and scapegoating.

[2] See Ch.4, “Envy – The Most Grievous of All Evils” in Malina, The New Testament World, for an extended discussion.

Douglas, Mary. Purity and Danger. An Analysis of the Concepts of Pollution and Taboo. London & New York: Routledge, 1966.

Previous Post
Privilege, Entitlement and Honour – Whose voice is heard?
Next Post
Dhikr: in the heart of faith
Close