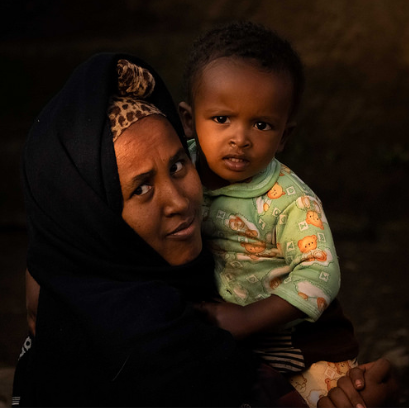 Mother’s Day is celebrated throughout the world, and with particular focus in the Muslim world. Women are celebrated; gifts are given in acknowledgement of nurturing female relationships, whether to mothers, women teachers or mentors. In some places, it is marked by processions, or speeches in schools and religious places of worship.

The Qur’an also emphasises the need to honour mothers, in Al-Ahqaf 46:15:

And we have enjoined on man to be dutiful and kind to his parents. His mother bears him with hardship. And she brings him forth with hardship and the bearing of him, and the weaning of him is thirty months, till when he attains full strength and reaches forty years, he says: ‘My Lord! Grant me the power and ability that I may be grateful for Your Favour which You have bestowed upon me and upon my parents, and that I may do righteous good deeds, such as please You, and make my offspring good. Truly I have turned to You in repentance, and truly, I am one of the Muslims.

And the hadith echo the same theme:

A man once consulted the Prophet Muhammad about taking part in a military campaign. The Prophet asked the man if his mother was still living. When told that she was alive, the Prophet said: “(Then) stay with her, for Paradise is at her feet.” (Al-Tirmidhi)

On another occasion, the Prophet said: “God has forbidden for you to be undutiful to your mothers.” (Sahih Al-Bukhari)[i]

Asma Barlas argues against the description of Islam as a theological patriarchy, because the Qur’an rejects designations of God as a father.[ii] She describes patriarchy as “father-rule and/or a politics of male privilege based in theories of sexual differentiation.”[iii] How then do we understand the ‘Father’ language in the Judeo-Christian tradition? Does it reflect an understanding of God based in a politics of male privilege? The temptation of this reading can be accentuated by English grammar, where we have both the Father and Jesus referred to by male pronouns, and also the Spirit (in Hebrew a female pronoun in Hebrew and in Greek, neuter). These are grammatical terms, not about the essential being of God – and yet they can shape our attitudes. What does the Bible really say about God’s nature?

Genesis 1:27 tells us how “God created humans to be like himself; he made men and women.” So God is not reflected primarily in the male, but by both male and female: God is not one gender or without gender, but beyond, bigger than gender. The Bible invites us to call God ‘Father’, not just Lord – a relationship of parental intimacy that goes beyond slave-master obedience. And The Bible is also replete with maternal images of God.

The creative Spirit of God, as we noted above, is always referred to with the female pronoun in the Old Testament. It is the Spirit who comes bringing creation out of chaos (Genesis 1:2); giving creativity and skill in craft to create furnishings of beauty and colour (Exodus 35:30-35); ecstasy (1 Samuel 10:6, 10), new life (Ezekiel 37). And in the New Testament, it is the Spirit of God who births us (John 3:3-8). As with the same metaphor cited in the Old Testament above, it would be hard to get a more female, maternal image of God!

The divine Word of God became incarnate, taking on flesh, as Jesus of Nazareth, Son of God. With a prescience that is both bold and breathtaking, Julian of Norwich, an early English theologian, describes Jesus in maternal terms as mother as well as brother and Saviour (LXIII). She links Jesus to the divine Wisdom, and she argues for Jesus as like our mother through four successive premises (LX).

We find God’s maternal care deeply within the Trinity.

On the other side, we often talk about those who have had negative experiences of their fathers, needing to find healing in encountering God as the true Father, who is the ideal that our best father models can only try to reflect. Yet it is also true that for many of us we need to find the image of the true Mother in God, in a way that goes beyond the often damaged images of motherhood we encountered in our own families.

As we encounter the love and reverence given to mothers in many Muslim cultures (and as we see the influence they wield), we may be able to point more adequately to the fullness of God as the one who loves, births and nourishes us, by drawing on the rich female as well as male images

of God that we encounter in the Bible. We have to go beyond grammatical gender to know God as the one who fully embodies the loving parent, from which every mother and father must take their example.

[iv] This parable perhaps includes a side reference to Sarah preparing bread for the divine visitors in Genesis 18:6. In each case the same extravagant measure of flour (equivalent to about 21 kg) is used – bread for a banquet!