In a world of limited good 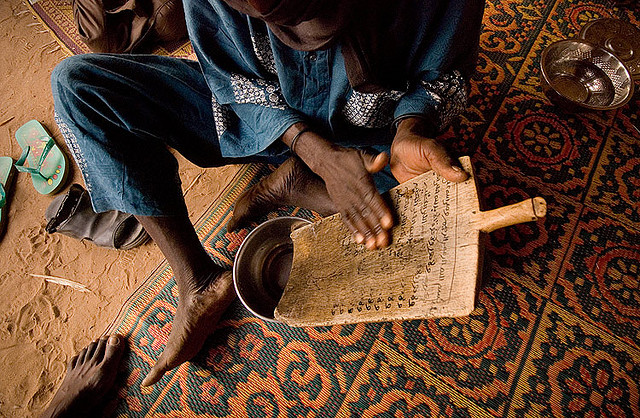 In a world of limited good

Hina[1] had given birth to a baby boy, the first boy in her husband’s family. Her mother-in-law put dark eyeliner all around his young eyes, making him look rather odd, to my eyes. And they dressed him in girl’s clothes. After there had been a day of visitors, congratulating the family on this new arrival, the baby was unsettled and fretful so they burned chillis in the house.

Bushra’s family had bought a new car. When some people came wanting to buy the car the family declined to sell it. The next time they took the car out it was involved in an accident, and written off. They said that the people wanting to buy it had put the evil eye on it.

Amina’s brother had a good job in the Gulf and was sending money home, so that the family began to build a new solid family home. Amina and her mother went to the local imam and paid him to write several verses of the Qur’an on small pieces of paper that they then folded and cemented into the walls of their new home.

Hina, Bushra, Amina and their families conceive of a world of limited good. This is probably not a conscious belief, but an underlying worldview. Limited good is based on the idea that there is a finite amount of good, material and otherwise, to go around in the world, and it has already been distributed. When someone’s life improves, when they gain a son or a car or a new home, it means someone else has less. What has been gained comes at the expense of someone else and is to their loss.

To upset the balance by acquiring more, receiving extra honour or attention, is conceived to threaten the equilibrium of the community. For those who acquire the addition they need to protect what they have gained. For those who fear they could lose when someone else gains they may take actions to restore the balance.

One of the ways in which this happens is using the evil eye, closely linked to envy. Envy is premised on ideas of limited good. If there is only so much good to be shared, and someone stands out through their achievements and gains, it is assumed that they have gained at the expense of another, or of the community.

It has been suggested that there are seven common features of the belief of the evil eye:

Women like Hina, Bushra and Amina must negotiate this world of perceived limited good every day. They must protect their families, their children, themselves, their possessions, their reputation from the actions of others. They use every means at their disposal to protect what they have. Baby boys are dressed as little girls, children made to look unattractive in order to protect them from the envy of another. Verses of the Qur’an are worn for protection or placed in walls or hung in cars to ward off intentional or unintentional evil eye. Blue beads or Fatima’s hand are displayed for protection.

On an Islamic teaching site a long list of symptoms of the evil eye are given: ‘Primary symptoms of evil eye are feelings of physical and/or emotional tiredness, unexplained bad luck or un-favorable incidences and illness. It is thought to cause drowsiness, drooping eyelids, listlessness, fatigue, weariness, lack of concentration, restlessness, discomfort, cramps, convulsions, headaches, hiccoughs, clumsiness, stomachaches, dry coughs, diarrhea, itching, hair loss, dry skin vomiting, the drying up of the milk of nursing mothers and livestock, problems with the blood and eyesight, impairment of sexual activity, impotence, sterility, disorders in menstruation, problems in pregnancy and childbirth, deficient breast milk, mastitis, and among babies and young children, incessant crying and fretting, a baby’s refusal to suckle or drink milk and other symptoms include lack of rain, the drying up of wells, the withering of fruit, sudden loss to business, and so on[3].’ A range o

In a recent conversation someone was expressing bewilderment that educated women in the country where she works accepted that it was the evil eye that had made them sick. Exhaustion, a virus, bacteria and other things were not being acknowledged and this friend was bewildered. How do we respond to our Muslim friends who see their troubles as a result of envy, as they negotiate everyday life in a world of limited good?

Another colleague responded that the issue was not so much what had caused the trouble but why. Why had that person succumbed to the virus they picked up at the wedding? Why had their car been in the accident when there are hundreds of other cars on the road? Why had the baby been cranky and fretful after so many visitors?

We can quickly dismiss our friends’ reactions and responses to the challenges of their lives interpreted through a worldview of limited good. Their desire to negotiate the inequalities of the world, the reality of the spiritual and material interacting in all of life and a longing for meaning in their human experiences calls for what Paul Heibert has described as a holistic theology: ‘a theology of God in human history: in the affairs of nations, of peoples and of individuals. This must include a theology of divine guidance, provision and healing; of ancestors, spirits and invisible powers of this world; and of suffering, misfortune and death[4].’

Our interactions have as their starting point our relationship with an extravagantly generous God who desires to bless. As his children we are not subject to a world of limited good, and as his ambassadors we are called to be a blessing.

Scripture has a number of blessings that we might consider learning and using in our conversations. The friend expressing bewilderment did note that many of the greetings in the language of her country were not just social politeness, they included ideas of protective power. As we note the greetings and social exchanges of our community, we can explore what blessings we may offer from the God of unlimited good. (Share what you learn with us here.)

[1] Names have been changed