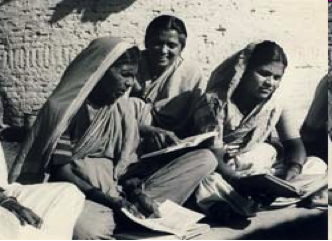 Modern histories of mission are based around categorisations that reflect lead male characters and minimise or ignore the stories of women. This is the assertion of Susan E Smith, in her book Women in Mission: From the New Testament to Today. Smith argues that the criteria used to tell the story of mission usually revolves around ‘events or movements that had their genesis in the lives and actions of eminent [male] missionaries and theologians’. Women’s role in story of mission has been largely ignored. One might not dare to say deliberately excluded, but there has been a significant failure to make ‘her story’ part of ‘his stories’[1].

Young Lee Hertig provides heart-breaking insight into this exclusion of women’s stories in her article ‘Without a Face: The Nineteenth Century Bible Woman and Twentieth Century Jeondosa’[2]. She details the role of these early women as evangelists and leaders, pioneers that gave roots to the establishment of the Church in Korea. She goes on to describe how these same women were marginalised as the Church in Korea became institutionalised. Male leadership was credited with their successes, even as it continued to build on them. She says ‘ the hard labour of the Bible women remained invisible and faceless’.

At the beginning of the nineteenth century, forty-one of the ninety-four registered mission Boards in America were women’s Boards. Cathy Ross describes how this phenomenon was relatively short-lived, merging and integrating with the General Mission Boards. Ross suggests a number of reasons for this: ‘appeals to denominational loyalty, criticisms about duplication of resources and inefficiency, assurances that they would be represented in decision making structures and that their concerns would be acknowledged and served in the new ‘integrated’ structures’[3].

In 1852 the Zenana Bible and Medical Missionary Fellowship (now Interserve) was established, an all women’s mission for 100 years that was committed to reach women secluded in the zenanas of the sub-continent. A former mission worker and leader within Interserve, has described the impact of those early women and the establishment of this organisation: ‘At a time when any sort of career for women was still regarded with suspicion, these pioneers challenged the cultural expectations of their day. In the 1870s they launched female medical missions, but as no medical school would accept women, they had to be trained privately. However, within ten years their persistence paid off, leading to Queen Victoria giving official sanction to the training of women as doctors’[4]. He acknowledges other women in history who pioneered growth and development within Interserve: women like Vivienne Stacey who mentored new generations of women into ministry and whose initiative led to expansion in the Middle East.

Mission organisations like Interserve can celebrate their unique history and identify ways that its pioneering women have shaped its ethos, and yet women’s stories in mission remain largely hidden. As Cathy Ross rightly asserted, the new integrated structures of mission resulted in the silencing of women and their contribution to missiology and mission strategy. There was no merger. There was takeover.

We want to celebrate the lives of the early women who dedicated themselves to work with women kept secluded in the zenanas of India for more than 100 years. Apart from the women whose vision started the Zenana Bible and Medical Mission, Lady Mary Kinnaird and Mrs Jones, there are few stories told of those amazing women, and few of them today are remembered by their names. The early Bible Women in today’s Pakistan are written of in the first history of the mission, Toward the Sun Rising, and yet today we speak of partnership with national believers as if it is something untried in mission history. The stories of Lilias Trotter, Daisy Marsh, Vivienne Stacey and many others need to stand alongside those of Samuel Zwemer, Thomas Valpy French, Temple Gairdner, William Carey and the other men whose lives of dedication and profound shaping of modern mission are honoured.

If we are to include these women’s stories then the work performed by women must be included as a primary part of mission. Hospitality, visiting, counselling, ministries of compassion and resistance, children’s work must no longer be seen as secondary to the primary tasks of preaching, teaching and church planting performed by men. Cathy Ross points to Philomena Mwaura’s testimony that women’s wholistic approach to ministry are an extension of their gendered roles in society. However, even with the growth of understanding of wholistic mission over recent decades women’s stories are still be excluded[5].

Telling women’s stories provides an opportunity to explore fresh insights and wrestle with new challenges. Their unique engagement, both historically and today, unlocks hitherto hidden understandings that could fundamentally shape values, missiology and strategies. Perhaps we can learn from the Interserve story. Women shape the ethos of an organisation in distinctive ways. We must tell their stories boldly.