Inviting her to speak 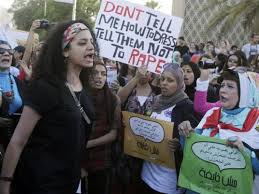 Inviting her to speak

I had missed this in Hagar’s story: God’s invitation to Hagar to speak. The angel finds her by a spring in the desert and asks her ‘Hagar, slave of Sarai, where have you come from and where are you going?’ Clearly the angel of the Lord knew all of this because he identifies Hagar as the slave of Sarai, so we can assume he knew her story. However, he invites her to tell her story herself. He creates space for Hagar to give voice to her story as she experiences it, not as someone else observes it.

It was while sitting with a number of women who are followers of Jesus the Messiah, and reflecting on this passage, that they helped me to see this. I understood that this struck them because they knew what it was to be silenced, to have no voice or to have their voice discounted, to have others speak on their behalf. But there in that room, over a number of days, they were invited to tell their story as they experienced it, not as others observed their experience of it. This invitation to Hagar to tell her story clearly spoke to them, and they helped me to see the importance of inviting the voiceless to find their voice, of creating space for the other to speak.

It is such a temptation, to speak on behalf of others, particularly when they seem silenced. Muslim women, to the outside observer, can appear silenced, marginalised, spoken for or on behalf of. What would we understand if we learned not just from our observations, but from creating a space where these women were allowed to give voice to their own experiences of negotiating life and faith each day?

That’s what I love about the Women’s I-view courses: that we as women create space to listen to the other, not to assume that we understand them and their life because we have read some books, or done some study, or heard someone else speak about them. (Check out upcoming courses which will soon be announced on the When Women Speak website https://whenwomenspeak.net/)

As we sat together as women and shared our stories over those days, and it was clear that we were together in a holy space. The presence of God was brought alive in each story. That was what Hagar found. In her encounter she gives voice to this by naming God, ‘You are the God who sees me … I have now seen the One who sees me.’

What made it a holy space? What is it about an invitation to find her voice and tell her own story that creates a holy space? Why does that become so profoundly and fundamentally life changing?

There are many women in the Biblical narrative who are invited to tell their story, given space to voice their needs and desires in the face of a world that would rather silence them. The circumstances of that invitation vary greatly, but each one becomes a holy place of encounter. Hagar is one we have already mentioned.

Hannah was a childless woman whose husband loved her and tried to make up for the pain of being unable to bear children by solving her problem in other ways. But it was when the priest Eli accused Hannah of being drunk that she was given the opportunity to give voice to her story, and we sense a profound change that Eli gives voice to, ‘Go in peace, and may the God of Israel grant you what you have asked.’ Hannah went out a changed woman.

Esther is made Queen because she follows her uncle’s advise. She then becomes the source of salvation for her people when she takes the opportunity to tell her story to the King. She took a risk, entering the King’s presence without an invitation. The outcomes was transformational, for Esther and for a whole nation.

When Jesus meets a Samaritan woman at a well it is because she is excluded from the community in which she lives. When Jesus creates space that allows her to give voice to story, the change in her life is so profound that she then becomes the messenger of hope and life for her whole community.

A Canaanite woman comes to Jesus, and his disciples seek to silence her, to get rid of her from their presence so that they don’t have to hear her needs being expressed. Jesus, however, creates a space for her to speak. In doing so the theology of his disciples is shown to be wholly inadequate in the face of one woman’s story. Jesus hears and responds to her request. 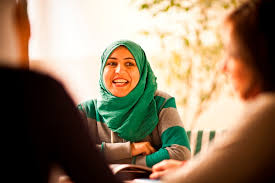 When space is created and the individual is invited to give voice to their story, the reality of the image of God in which we are all created comes alive in their being known, and the space becomes a place of holy encounter, a place of revelation.

Hagar’s story speaks to us of the affirmation of identity as the individual is drawn into community through entrusting their story to another. This slave woman who was alone and isolated becomes known, and is no longer an excluded individual. The Angel of the Lord offers her a place to be known and drawn into relationship.

Creating space and inviting the other to speak their story honours the image of God in them, affirming that they are valued by God who knows them.

The Samaritan woman perhaps helps us to see this more clearly. When she goes back to her community a changed woman, no longer silenced and excluded, she speaks of the transforming power of being known. She is known because Jesus has invited her to give voice to her life and thoughts and fears and beliefs.

As I think of my Muslim sisters, I commit afresh to create space to hear their stories, not to assume I know because of what I see in the media, what I make sense of through my own worldview lens, or what I have studied. I commit to knowing my friends by inviting them to invite me into their lives through their stories.

Maybe the question we can continue to ponder is how do I create space in which others feel included and empowered to tell their stories?

64% of men admit to harassing women in Egypt’s streets: report

Life as a 30-Year-Old Single Woman in Egypt