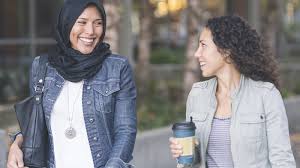 (This post comes from the writings of Vivienne Stacey. Vivienne was a pioneer thinker, researcher and writer who spent many years working in Pakistan and was a mentor to many women, and men, who are involved journeying with our Muslim friends. This paper is used in its original form.)

Jews, Christians and Muslims all acknowledge that Jesus is a sign from God. Their present understanding of the meaning of Jesus as a sign is different.

The Jews have no problem with the words of Isaiah in chapter 7:14 ‘The Lord himself will give you a sign: the virgin will be with child and will give birth to a son, and will call him Immanuel.’ Most Jews are still waiting for the fulfilment of this prophecy. It is encouraging to hear of Jews coming to faith in Jesus the Messiah. We hear of groups of Messianic Jews  but as yet there are not many like Simeon.

In the Qur’an the frequently used Arabic word for ‘sign’ (aya) was probably taken from Syriac or Aramaic. It was used of ‘Isa, the Messiah, son of Mary. He was a sign not only to the Israelites but to the world as the following verses indicate. Q. 19:21 …“and (We wish) to appoint him as a sign unto men and a mercy from Us.” (Yusuf Ali, The meaning of the Glorious Qur’an); Q. 21:91 …“and made her and her son a sign to the worlds.”  (Richard Bell, The Qur’an Interpreted).

In the Bible, Simeon, at the presentation in the Temple of Jesus by Mary and Joseph, declared: ‘My eyes have seen your salvation, which you have prepared in the sight of all people, a light for revelation to the Gentiles and for glory to your people Israel.’ (Luke 2:30-32, N.I.V.). After blessing the Holy Family he prophetically declared to Mary: ‘This child is destined to cause the falling and rising of many in Israel, and to be a sign that will be spoken against, so that the thoughts of many hearts will be revealed. And a sword will pierce your own soul too.’ (Luke 2:34-35, N.I.V.).

The significant place given to Jesus in the Qur’an and the uniqueness of Jesus in the Bible present both bridges and barriers to Muslims and Christians studying each other’s scriptures. Over seventy verses of the Qur’an refer to the Christ or to Mary.  He is ‘Isa, Ibn Maryam, al-Masih in the Qur’an – a servant or ‘abd of God, a prophet or nabi and a messenger or rasul, word or kalima,  a witness or shahid, etc. These descriptions are all possible bridges. The main barrier is that while the Qur’an allows that the Jews intended to kill him and that he was willing to die it denies the fact of the crucifixion. One day the Muslim picture of Jesus will come in full focus for Muslims and many will understand that Jesus needed no protection from shame and that it was through the suffering of death that he was crowned with glory and honour. (Hebrews 2:9). We are concerned with the Jesus of the Bible. If we compromise his uniqueness and undermine the inspired records we deny him. The message the Holy Spirit gave to Simeon and to the world is that Jesus is a sign for all peoples but a sign that shall be spoken against. In denying the event and therefore the fact of the crucifixion Muslims do speak against the very central teaching of the Biblical record. Undoubtedly, Christians and Muslims have a considerable amount in common. It is part of Christian hospitality and obligation in love that we seek to understand and relate sensitively to the billion or more Muslims who form a fifth of mankind. Our common humanity is the greatest bridge but our two faiths provide many paths which can lead us to creative encounter and faithful salutation. Muslims consider Jews, Christians and themselves to be the ‘people of the Book’ (Arabic ehl e kitab). Jews, Christians and Muslims all recognize Adam and Abraham as spiritual ancestors.

These days we hear constant references to the terrorist atrocity in New York of September 11th, 2001. But September 11th was not the day that changed the world. The day that changed the world was a certain weekend in Jerusalem nearly 2000 years ago when Jesus died on a cross for our sins, was buried and rose on the third day. ‘The time had fully come’ (Galatians 4:4). This was the exact minute in God’s timetable to change the world and to offer salvation to all peoples.

I want to conclude by telling you of some illiterate and restricted Muslim women whom I met in a remote village in Pakistan. It was 1962. I was with 2 other foreign workers and we were out of touch with world news. The women were very concerned as they had heard that President Kennedy had been assassinated. They said: ‘We are very sorry about the bad news that your leader is dead’. They had heard over the radio. I asked them if they had ever heard the good news about a man who was killed and rose from the dead. They said ‘No’. We told them the good news about Jesus. I have often thought how swiftly bad news spreads and how slowly the good news of Jesus takes to reach some places. May God bless you and may we all be faithful stewards and disciples of our gracious Lord and Master Jesus Christ until we meet him face to face.