Love is the best option 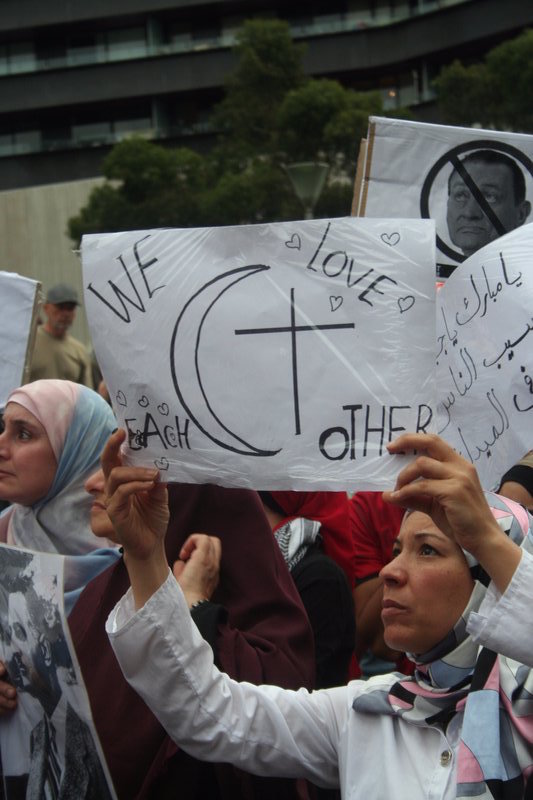 Love is the best option

Christians and Muslims in America have an image problem. The rest of the world sees us as intolerant, belligerent, prideful, nationalistic, and extremist. As the daughter of Christian and Muslim parents, I feel like a kid stuck in a bad marriage, trying to salvage my parent’s reputation and begging them to get along. As a child I remember feeling conflicted in a home that followed two religions and suffering shame after the 1979 hostage crisis. Today I encounter this drama played in our country.

The Fort Hood killings of 13 American service men by Major Hasan became my watershed experience. I’d lived in the Middle East and Europe and been accustomed to bombings and religious unrest, but I couldn’t fathom such horror happening in the U.S. Not in my homeland, where Muslims and Christians have lived peacefully.

Tragically, this conflict, along with 9-11 and the Iraq and Afghanistan wars, perpetuates a climate of religious polarization. It’s launched a backlash against innocent Muslims and made Christians look like bullies.  It’s blurred the lines between many peaceful Muslims and a few dangerous ideologues; and many caring Christians and a few conspirators who use the church for political purposes.

We can’t afford to repeat the last decade. We desperately need a new generation of American Christian and Muslim leaders, who embody our nations’ decency, to stand up and show the world that we can overcome our fury and work toward reconciliation, accountability and mutual respect.

Why? Because 1.2 billion Muslims believe that America is at war with Islam. This climate of war emboldens radical ideologues, giving them a foothold to recruit young jihadis (some of whom are now American youth). Meanwhile, many Christians are openly apprehensive toward their American Muslim neighbors. Most importantly, America needs leaders to remind the public, in a fresh and relevant way, of Jesus’ teachings to love our neighbors (even if they feel like enemies).

After the Foot Hood killings, I began searching for clues of a U.S. strain of extremism. Like in a marriage, I knew there are two sides to a story. So I called Mary Habek, a friend and an Islamist expert at Johns Hopkins, with my questions. She, in turn, told me to contact Daveed Gartenstein-Ross, the author of My Life Inside Radical Islam. I spoke with leaders of Act for America (a watchdog group against Muslim radicalizers). And I interviewed Carl Medearis, a Christian who loves Arabs and co-author of a new book, Tea with Hezbollah.

To understand the Muslim front, I began a passionate email discourse with a Muslim Student Union board member and listened to podcasts by Reem Salahi, a brilliant, female, human rights lawyer. I then got in touch with One Legacy, a new Islamic radio station, read transcripts from counter terrorism bloggers and debates that question if Islam is becoming radicalized. Even my pastor tried to satiate my appetite by offering me his book, My Friend the Fanatic, a memoir that chronicles radicalization in Indonesia.

These Christian and Muslim leaders showed great patience with me. In interview after interview, I heard the need for inter-cultural discourse, relationship building, education, and accountability. I’ve also learned how conservative Christians’ tone (perhaps because of their eschatological and Zionist leanings) has exasperated the crisis. As I studied the rise of extremists, their world-view and their wounds, I became transformed. I fell in love with the enemy.

I respect that American Christians and Muslims have a need for separateness. I was born the daughter of an Iranian, Muslim. But my American mother baptized me Catholic. I grew up in Seattle and, after my mother’s death from cancer, Christian neighbors raised me. Today I’m an evangelical Christian and live three miles from Rick Warren’s Saddleback Church in Southern California. I’m a living oxymoron. And I see my heritage as a call to build bridges of understanding.

I’m not saying that Christianity and Islam are the same ideologically, theologically, or politically. There are enormous differences at the core. However, as both occupy global influence in our world today, Christians and Muslims must try to know each other and know each other rightly.

It’s time to try something new. President Obama, the military and American Muslim leaders are now sharing the need to launch a movement to combat Jihadist ideology (which uses violence for political purposes). Military containment, humanitarian work, and hard borders, however, will not be enough. We must sow seeds of trust and confidence.

I believe the next wave of peacemaking must include the power of counter-narratives (stories that challenge people’s world-views and promote peace). I think of Iran’s Green Movement and U2’s Pasadena concert. My heart leapt as images of Iranians appeared on a jumbo screen and Bono shouted, “Can you hear us, Iran? This is the United States. Calling for freedom. We’re speaking to you. Can you hear us?!”

Additionally, this next decade will require empowering women. We must encourage the development of women’s involvement and leadership in all aspects of society. This means providing training not only in earning a living, but also in birthing women’s networks that are committed to building free and civil societies. We must support gender equality and girls’ education. Mothers must be challenged to teach their children to say no to violence and the forces of radicalization.

So what’s the bottom line? Even though we’ll disagree on some issues of faith, today’s Christians and Muslims can improve our relationships with each other by harnessing the power of new media to promote peace (Twitter, blogging, Youtube, books, satellite programs, radio and films), working in areas of agreement. Collectively we can capture the hearts and minds of millions and show the world how to build trust and confidence. Together we can resist the old narrative that fuels hostility at home and aboard. Let’s put the last decade behind us and create a new identity where the sense of the faceless enemy is abolished. Blessed are the peacemakers, for they shall be called the children of God.

(The main text of this post first appeared at

Shirin Taber is the founder and director of the Middle East Women’s Leadership Network. She is an Iranian-American and the author of Muslims Next Door (Zondervan). She came to faith in Christ through an American neighbor after the Hostage Crisis in 1980. The Los Angeles Times, Detroit Free Press, and Fox News have featured her writing and work among Muslims and Christians alike. Shirin has served with Cru, the JESUS Film Project, and the Christian Broadcasting Network. With the JESUS Film Project, she helped produce the Magdelena film, which has been viewed by tens of millions in the Middle East. Shirin lives in Foothill Ranch, CA with her husband and three children. She currently is writing two new book projects titled Make Peace: Countering the Rise of Extremism and Sex in Islam. Shirin can be reached at shirintaber@gmail.com and www.mideastwomen.org