I shall never forget breaking the fast with my landlord’s family in the Middle East. The hospitality was generous, extravagantly generous. The table was groaning under an array of food that included several varieties of meats, salads, vegetables, dips, breads, nibbles and sweets. The hospitality was more that the food, my hosts insisted on filling my plate repeatedly, wanting both to serve and to ensure that I ate well (too much).

I received the same hospitality in South Asia. Walking in the mountains one day, a young boy offered to be our guide across one of the glaciers, but it had to begin with tea in his family home, a small hut that was just one room, perched on the side of that mountain. The boy disappeared for a while, and came back with the oldest packet of biscuits I have ever seen. I wondered how much it cost that family and who would not eat that day because they bought biscuits for us. They shared what they had with a smile and delight, and my life was richer for experiencing this extravagant generosity and hospitality.

As I was reading the Christmas story, I was struck by the hospitality that Elizabeth offered to Mary, rich and generous and extravagant. Mary’s life had just been turned upside down. A visit from an angel, pregnant before she lived with the man she was committed to marry, her fiancée wondering how to divorce her, life was chaotic, confusing even. And so Mary goes to visit Elizabeth.

Elizabeth extends hospitality to Mary in several ways. (i) She provides a place for Mary to stay for several months. Luke 1:56 tells us that Mary stayed with Elizabeth for about three months. It was a place of safety and security for Mary in a life that had been turned upside down. (ii) She demonstrates generosity and loving acceptance. There were questions on honour and shame – a young woman pregnant before completing her marriage. Elizabeth, and Zechariah, welcome Mary without question, even if the community would question their honour as the accepted this pregnant young woman. (iii) She blesses Mary. This older woman was finally having a child of her own, and yet she rejoiced with Mary and what God was doing in and through her. She spoke out a blessing over her. These words of affirmation were music to Mary’s ears and she in turn can lift her voice to God and acknowledge Him and His work.

Cathy Ross speaks of hospitality as an “ancient virtue and a prophetic practice, as it crosses boundaries, welcomes all and involves taking risks”[1]. Ross notes that attentiveness, presence, marginality and spaciousness reflect hospitality in practice, and goes on to suggest that “[i]t requires relationship, receiving, community, and change. Our God embodies hospitality in the Trinity. Hospitality is at the heart of God’s reign and is essential for the practice and meaning of the kerygma. Hospitality is an ongoing practice that will be modified and negotiated as we interact and engage with one another”[2]

Hospitality is an important part of the practices of Islam, seen as a way to observe the commands of Allah and to demonstrate a high moral life. The Qur’an includes the story of Abraham showing hospitality to guests saying: Has the story reached you of the honoured guests of Abraham? Behold, they entered his presence and said ‘Peace!’ He said” ‘Peace!’ (and thought: ‘They seem) unusual people’ they he turned quickly to his household, brought out a roasted fattened calf, and placed it before them. He said: ‘Will you not eat?’ (Surah adh-Dhariyat: 24-27). The Hadith also encourage hospitality: Abu Shuraih Khuwailid Bin Amr Al-Khuzai (rta) reported that he heard the Messenger of Allah (swt) (sa) saying: “He, who believes in Allah (swt) and the Last Day, should accommodate his guest according to his right.” He was asked: “What is his right, O Messenger of Allah (swt)?” He replied: “It is to accommodate him for a day and a night and extend hospitality for three days, and what is beyond that is considered charity.” (Bukhari and Muslim)[3]

One of the great shocks for many families fleeing violence in Syria, Iraq, Yemen and so many other places, is the absence of hospitality. ‘We have nowhere to go’ seems unthinkable in Middle Eastern culture, but many live that reality today. A woman sitting in an almost bare flat said she would have to sell off the last of the possessions she brought with her, but that would not be enough to cover the rent. She did not know where she would go. Women repeat stories of the hostility they have encountered in the countries where they presently seek refuge. 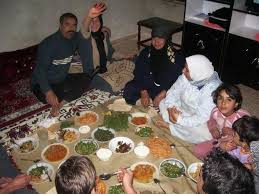 Hospitality is integral to expressing love for our neighbour. In telling the story of the Good Samaritan, Jesus refocussed the question, who is my neighbour, to who should I be a neigbour to. As we begin 2017, Jesus calls us to exercise hospitality by creating a welcoming space for others. Cathy Ross describes this as

Hospitality is welcoming the guest and stranger. Matthew 25:35 reminds us “… I was a stranger and you invited me in” (NIV), a thought captured in this Celtic prayer:

I saw a stranger last night. I put food in the eating place, drink in the drinking place, music in the listening place, and in the sacred name of the Triune, he blessed myself and my house and my cattle and my dear ones. And the lark said in her song, “Often, often, often goes the Christ in the stranger’s guise.”[5]

[1] Ross, Cathy “Often, Often, Often Goes the Christ in the Stranger’s Guise”: Hospitality as a Hallmark of Christian Ministry in International Bulletin of Missionary Research, Vol 39, No 4. p 176

[5] Quoted in Ross, Cathy “Often, Often, Often Goes the Christ in the Stranger’s Guise”: Hospitality as a Hallmark of Christian Ministry in International Bulletin of Missionary Research, Vol 39, No 4. p. 179

Previous Post
Women, Suffering, and the Messiah’s birth
Next Post
The Status of Muslim Women and the Gospel
Close