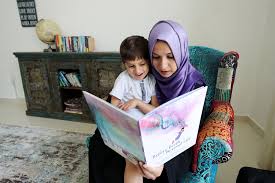 On Mother’s Day this past year, a group of Muslim and Christian women met to discuss… mothers. No surprise there. We met on a Saturday afternoon to talk about the meaning of motherhood and how mothers are presented in the Bible and the Qur’an. The Qur’anic text we selected was from Chapter 3, the Family of ‘Imran:33-40 and from the Bible, 1 Samuel 1:1-28. The comparison was between the mother of Mary and Mary’s birth with the story of Hannah and Samuel’s birth in the Bible (interestingly, Mary’s mother is named Hannah or Anna in Islamic traditions; she is not named in the Qur’an).

In seven brief verses, the Qur’an recounts an extraordinary version of Mary’s birth, followed by that of Yahya, or John the Baptist. In the Qur’an, Mary’s mother is presented as the wife of Imran, one of the elect families together with that of Adam, Noah and Abraham (Q3:33). There is some speculation over who the biblical counterpart of Imran might be, but most consider Imran to be a corruption of the name Amram, father of Moses. Mary and her mother are thus presented as descendants in the line of Aaronic priesthood, with the Arabic Maryam resembling the name Miriam, sister of Moses and Aaron, and the Aramaic Mariam.

The Qur’an has Mary’s mother dedicate ‘that which is growing in her womb’ to God before its birth (Q3:35). Once Mary is born, her mother remarks on the fact that she is a girl, names her Mary and commends Mary together with her offspring to God against Satan (Q3:36). Once Mary is given to the oversight of Zacharia, supposedly in the temple, she becomes a model of piety for him, so much so, that he prays for ‘virtuous offspring’ (Q3:38). In the Bible, Hannah promises her child to the service of God, if she were given a son (1 Sam 1:11). She passes her son on to the service of Eli and they worship together before her return home (vv. 25-28).

Together, our group remarked on these texts as showing an extraordinary amount of independence for women. Both Hannah and Mary’s mother pray and commit themselves to courses of action independently of their husbands. Our Muslim friends were also concerned with questions about Mary’s lineage and the prescribed length of time to wean a child. According to their tradition, it is a minimum of two years. The Christian women explained that we had no religious prescription for weaning but that there are other stories about weaning, for example of Isaac in Gen 21:8.

For the Christians in the group, the question was about the purity of Mary and her offspring. According to some hadith, Mary and Jesus are the only two humans not to have been kissed or pricked by the devil at birth (Hadith collection Ṣaḥīḥ al-Bukhārī 3248, Ṣaḥīḥ Muslim 2366). (This seems to be an Islamic version of the immaculate conception; the belief that Mary was born without sin, as held by Roman Catholics – not remarked on during our conversation). Instead, we expressed surprise at the elevated role given to Jesus and his family in the Qur’an, with Jesus later in the chapter called a Word from God (Q3:45). This seemed to be equally surprising to some of the Muslim women.

And so, most of our conversation revolved around the idea of being dedicated to God, of being called to his service, not just submitting ourselves without conviction or critical thought. Our prayer continues for our sisters and for each other, that we will heed God’s calling on our lives to daily ‘birth’ the Word of God to those around us. May we continue to take up this calling in 2020.

Louisa Maynardt has taught Religious Studies at tertiary and secondary institutions. She has worked in Southern Africa and in the UK to equip the church to reflect on its outreach to others. LM is always looking for ways to engage communities to interact with each other and to improve their religious literacy.