On Mothers and Maryam, mother of the Messiah 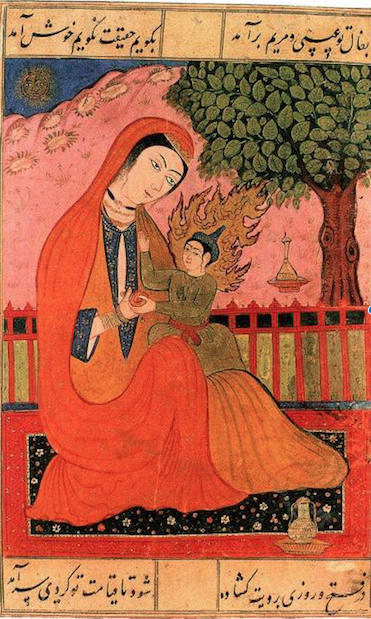 On Mothers and Maryam, mother of the Messiah

It was my first experience of ‘Mother’s Day’ in the Middle East. My experience of quiet family gatherings in the west (amid a wave of frenetic commercialism in the shops) had not prepared me for its very public celebration in the Middle East. Schools and other institutions had gatherings where people recited poems of their devotion to their mothers, buildings were garnered with celebratory banners, and people gave gifts or cards of appreciation to any woman who stood in a nurturing role to them – mothers, and also teachers, and mentor-friends. It was celebrated by churches, and also by Muslim women’s gatherings.

While ‘Mother’s Day’ began in the US, it taps deeply into existing cults and celebrations of motherhood in different cultures. In Muslim cultures, mothers are deeply revered. One of the key ways for a woman to gain respect and honour is to marry and have children (especially a boy in patriarchal cultures, but a girl is celebrated more in the matriarchal cultures of South East Asia). Mothers carry primary responsibility for the success, health and well being of their children. An Egyptian woman described to me her work in rearing and marrying off her children in the same terms that are used to describe Muhammad’s vocation as prophet – risalitna (our mission, or vocation). A popular hadith describes Paradise as ‘under the feet of mothers’ (a person earns paradise through how they serve and care for their mother during her life).[i] Another hadith describes how ‘a man came to Allah’s Apostle and said, “O Allah’s Apostle! Who is more entitled to be treated with the best companionship by me?” The Prophet said, “Your mother.” The man said, “Who is next?” The Prophet said, “Your mother.” The man further said, “Who is next?” The Prophet said, “Your mother.” The man asked for the fourth time, “Who is next?” The Prophet said, “Your father.”’[ii] Also cited is the Qur’anic verse Al-Ahqaf 46:15: “We have enjoined on man to be dutiful and kind to his parents. His mother bears him with hardship. And the bearing of him, and the weaning of him is thirty months.” The elevated position given to mothers in Islam is sometimes instanced to show how women are honoured within Islam. However this offers no place to the childless woman: women receive honour in relation to their offspring, not in their own right.

Even in affairs of state, mothers can play a powerful role behind the scenes. In some of the Gulf states, mothers of the sheikhs can influence decisions that are made. Some attribute Hafez al-Assad’s defeat of an attempted coup by his younger brother to their mother’s influence.

Maryam (Mary), mother of the Messiah, is given a preeminent role in the Qur’an. She is the only woman identified by name, and her name is also given to one of the Qur’anic surahs (19). Most of the other personal names used as titles for Qur’anic surahs are names of prophets (Yunus 10, Hud 11, Yusuf 12, Ibrahim 14, Muhammad 47, Nuh 71). This, together with the fact that God’s angels spoke to her to tell her of the coming birth, has given her the status in Islam of almost a prophet.[iii] Many Muslim women’s circles take Surah 19 as a favourite recitation to bring blessing; and some women may even pray through her, as a saint.

In both Islam and Christianity, Maryam’s importance comes as mother of the Messiah, seemingly validating the concept of motherhood as the supreme role for woman. It is thus ironic that she receives this role via virgin birth, which subverts the marriage relationship as the ultimate purpose for all women. And it also means that she attains motherhood from the position of ultimate shame, as an unmarried mother. In the Qur’an, it is through the miracle of her son speaking from the cradle that she is vindicated (Maryam 19:27-33). In the Gospel, it is Joseph’s willingness to give her his name and protection in marriage that saves her from public disgrace, with its associated risk of death by stoning (Matthew 1:18-25). But her example challenges women to be willing to go beyond cultural norms and even suffer family and public shame in order to obey what God calls us to. The Bible is rich in maternal metaphors for God. But in the Gospels we also find non-maternal female images of God, such as a woman baking, or cleaning her house (Luke 13:20-21, 15:8-10). And where we find the cultural focus on Maryam being honoured as Messiah’s mother, we also see Jesus challenging it, making clear that it is primarily a relationship of obedience and discipleship which brings women honour, rather than maternity – even of the Messiah! (Luke 11:27-8; Matthew 12:46-50, Luke 8:19-21) Of course such obedience may include (for women as for men) godly relationships with spouse and children, but it finds its relational source and focus in the Messiah.

Maternity is honoured in Islam, as in many cultures around the world.   At a quick glance, the exalted place of Maryam seems to be due to her fulfilment of this maternal vocation of women. But a closer look shows that in its fulfilment, marriage and maternity are subverted as the ultimate role and source of honour for women. This does not come fundamentally through their relationship to husband or child, but through their relationship of obedience to God through the Messiah, within the community of faith.

[i] While this hadith is widely quoted, it is not rated as a strong hadith: some commentators consider it weak or even fabricated. http://authentichadiths.blogspot.com.au/2012/03/authenticity-on-hadith-paradise-is.html