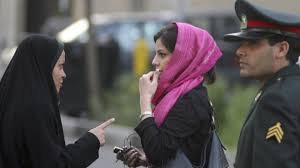 A number of nations where Islam is dominant have ‘morality’ police. Iran has the Gasht-e-Ershad, whose focus has been on ensuring that women wear the hijab properly. This force will soon be disbanded and instead 7000 undercover Gasht-e-Ershad officers will report offenders to the regular police who will decide whether to act or not. Saudi Arabia’s famous Mutawa (meaning particularly obedient to God), or Committee for the Promotion of Virtue and Prevention of Vice, are active in policing dress, public interactions and behaviours. Couples out together may be asked to show proof that they are married if questioned by the Mutawa. President Omar al-Basir in Sudan set up the Public Order Police in 1993, with the power to arrest suspects who are tried at special Shari’a courts. Most famously they gained international attention for the arrest of a female journalist for wearing loose fitting slacks when such dress was considered un-Islamic and therefore inappropriate for women to wear, particularly in public. Malaysia has ‘religious officers’ who enforce Shari’a law, issues like eating in public during Ramadan, men and women in too close proximity.[1] Shari’a police operate in areas of Indonesia, particularly Aceh, with official sanction, and then there are those who operate without official sanction in places like Afghanistan and Pakistan. The rise of ISIS/ISIL has seen increased attention on public behaviour considered immoral in countries like Syria and Iraq.

“My mom came to get me [from the Sharia police office] at 7 a.m. I was crying. The head lecturer at my campus, Doni, was there to lecture me. A Sharia police officer told him that I had been caught [on an isolated road on a motorcycle with my boyfriend]. He told my mom and me that I should be buried and stoned to death. I said, “Sir, I was only trying to look for a shortcut, and I should be stoned for that? What about the officers who raped me last night?””[2] This story highlights the disfunctionality of policing morality. Picked up by the police for allegedly being with her boyfriend on a motorbike, she was then raped by those who were protecting public morality from this so called evil.

Making personal decisions about how the individual conducts their life, or expresses their faith, identity and morals is an uncontested right for many of us, and yet it is strictly policed where governments want to implement particularised forms of Shari’a law. While men as well as women suffer abuses at the hands of the morality police, women are particularly vulnerable. Statistics are difficult to obtain, but organisations like Human Rights Watch and Amnesty International, as well as media reports, detail the focus of these keepers of morality on women.

Why are women the focus of morality projects? Fatima Mernissi speaks about the direct link that is created between ‘the security of the social order to that of the woman’s virtue, and thus to the satisfaction of her sexual needs. Social order is secured when the women limits herself to her husband and does not create fitna, or chaos, by enticing other men to illicit intercourse’[3]. Patriarchy, as it is expressed in mainstream Islam, makes the woman’s body family and community property. Jameelah Medina says: ‘she must safeguard her body at all costs because her worth and her family and community’s honor are based on whether or not her vagina remains untouched and her hymen remains intact[4].

Social order, family and community honour, even national security, have been aligned with women’s behavior. The question of national security and women’s behavior is rooted in the struggles for national identity in the colonial era. ‘[R]ules for ‘respectable’ women were laid down, traditions were invented, and the reconstructed ideal woman of the ethnic/religious middle class group was represented as a symbol of its purity.[5]’ Partha Chatterjee argues that culture was separated into two spheres under colonialism, material and spiritual. The spiritual sphere was the area of culture and tradition, the place of self-articulation that must be protected and maintained, untainted by the encroachments of the outside power. This framed the ways it was permissible for men and women to be affected by westernization, and had a profound affect on women: ‘The world is a treacherous terrain of the pursuit of material interests, where practical considerations reign supreme … typically the domain of the male. The home in its essence must remain unaffected by the profane activities of the material world – and woman is its representative. And so we get identification of social role by gender to correspond with the separation of social space[6]’.

The public policing of morality is, in part, a continuation of this colonial project of maintaining self-identity. Other factors also contribute, many interlinked with the position of women in the family. Samia Bano, in a study on honour related violence, points to the inter-relationship of factors such as the transmission of values, ideas, customs, morals and traditions that are intriscially influenced by cultural and religious ideologies and practices[7]. Through the separation of space into public and private, and the policing of public space, women’s behaviour becomes a touchstone for good and evil, for the health or illness of society, for the honour and shame of the community and family.

A number of initiatives by women are challenging this hegemonic construction of morality and women’s identity. In Iran, the ‘My Stealthy Freedom’ campaign[8] focusses on women being forced to wear the hijab. Women are boldly posting photos of themselves without their hijab. Women in Saudi Arabia have fought for the right to drive as one expression of breaking the shackles that police their behaviour.

The scriptures are replete with stories of religious and community leaders seeking to police women’s behaviour. In one story they brought a woman to Jesus who they said they had caught in the act of adultery. Somehow it was only her behaviour that needed to be dealt with. Throwing her at Jesus feet, their act of protecting society and religion from this desacration puffed them up with self-righteousness. But it was more than a pin that Jesus used to prick their inflated ego. His statement, let the one who has no sin cast the first stone, and the ensuing silence, fell on them like a ton of bricks. The slunk away.

Jesus went on to ensure that the woman understood her true identity as a forgiven child of the living God. Herein lies a challenge in communicating the gospel. Whereas society may create women’s identity in relation to power, control and ownership, Jesus gives it in relationship. Where governments and religious authorities make women carry burdens of security, morality and honour/shame, Jesus releases the burden and sets women free to pursue a life of wholness in relationship with him. Where the morality police, governments, husbands, fathers and brothers say a woman is guilty of leading them and the society astray, Jesus says she is forgiven, loved, accepted and precious.

How does the message of the good news for women who follow Jesus become part of the call for and activity of change where women are policed as the agents of shame and evil?