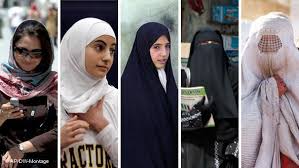 Why do we focus comments and contests on the religious clothing that women wear, particularly the veil[1], but make no comment on that of men, such as the Sikh turban or Jewish men’s yarmulkes?

France was the first European country in our modern history to ban women from wearing the full-face veil in public. On 11 April 2011 a law was enacted because, President Nicolas Sarkozy said, ‘veils oppress women’[2]. The European Court of Human Rights upheld the ban in July 2014, saying it did not violate freedom of religion and expression. This contrasts to a Sikh man winning the support of the United Nations Human Rights body for the violation of his religious freedom over his right not to have to remove his turban. While the European Commission on Human Rights upheld the French requirement that Sikhs remove their turbans for passport photos for security reasons, it acknowledged that this was an infringement of his religious rights[3].

What is so different? Why is removing the turban an infringement of religious rights, but requiring Muslim women to remove the veil does not violate freedom of religion?

The veil and its meaning is a contested discourse. Some speak of the veil as a visible statement of religious identity, while some tie it to the rejection of colonial and post-colonial Western influences. Others see it as a declaration of modesty and respectability in patriarchal societies. Still others say the veil is the freedom to move about in public space. In some places it appears to be a fashion statement, as elaborate folding of the veil is matched with tight fitting clothes to create the image of beauty and modernity within the boundaries of religious and/or cultural dictates. Then again, it is seen as a rejection of Western modernity. Some have argued that it is a social issue that emerges from a focus on women’s sexuality.[4] For many looking on from outside it is seen as a tool of oppression, reflective of the subjugation and marginalisation of women.

With such contestations of meaning it is difficult not to conclude that issues surrounding the wearing of the veil are not entirely religious, an argument that is made by some Muslim women. The campaign by Iranian women called My Stealthy Freedom[5] is representative of modern challenges to the veil by Muslim women. The veil is given meaning that goes beyond religious practice. Discussions on men’s religious dress focus on it as just that, religious dress. So, is the issue the veil, or is it women?

Listening to voices from within Islam, the meaning and use of the veil is also contested, even by those who believe it is imperative for expressing piety in faith. Elisabeth Buergener’s research on women seeking a more devout life in Syria showed something of that contestation: that “the prejudice against outwardly conservative women has shifted from those wearing the headscarf to those wearing face veils. The former have become a broadly respected group in Syria, yet the latter are still judged … Thus the meaning that extreme forms of veiling convey is ambiguous, as Syrians who are more moderate often expressed to me that women in extreme veiling do so without choice because of family pressures and the backwardness of their communities.”[6]

Issues about the veil are often debated in circuitous cultural-social-religious arguments. This creates complexities of meaning that obfuscate practice.

The question remains, why is the veil enmeshed in these complexities in ways that men’s religious dress is not.

The variable is surely women. It is discourses around women that shape the way meaning is read onto the veil. The veil has become symbolic of so many of the contestations around women. As Leila Ahmad has shown in her book, The Quiet Revolution, there is a history of ascribing meaning to the veil; to veil or not to veil is inscribed with meanings of social, political and religious identity and order[7].

Today, the veil has become emblematic of our fear of the ‘other’. In our globalised world, with mass movements of people, and political and social instability, ‘othering’ has become a wall of divide built with the bricks of fear. Women, as so often through history, become that place of defining the other, the place of contesting values in the face of difference, and the place of control to protect from the other.

Gender dulls our hearing to appeals that the veil is an expression of religious life and piety. It ignores women’s ascriptions of meaning, reducing them to irrelevancy in the face of multiple contestations. It disempowers women in their faith journeys.

This calls for a shift from debates on the veil to listening to stories of faith and expressions of desire for God. Debates on religious clothing have obfuscated our understanding of Muslim women’s faith. The agency of Muslim women in pursuing faith has been marginalised in the contested discourses of the veil.

Religious leaders, disciples, tradition, social norms and legal rulings tried to marginalise women from pursuing faith through encounters with Jesus. The disciples attempted to shut out a Syro-Phoenician woman, using religious practice and theological arguments. A group of men that included religious leaders wanted judgment against a woman they said was caught in adultery. Social norms saw a Samaritan woman marginalised and isolated. But, again and again Jesus rearticulated the discourses surrounding women. He engaged women in turning religious norms and traditions upside down, confronting prejudices and biases used to marginalise them. He defied the political, religious and social traditions to invite women into relationships of faith with Almighty God.

In the face of contestations over religious clothing that focus on Muslim women today, the challenge is not to allow these to marginalise them from pursuing a relationship with Almighty God.

[7] Ahmed, Leila, A Quiet Revolution: The Veil’s Resurgence, from the Middle East to America. See Chapter 1