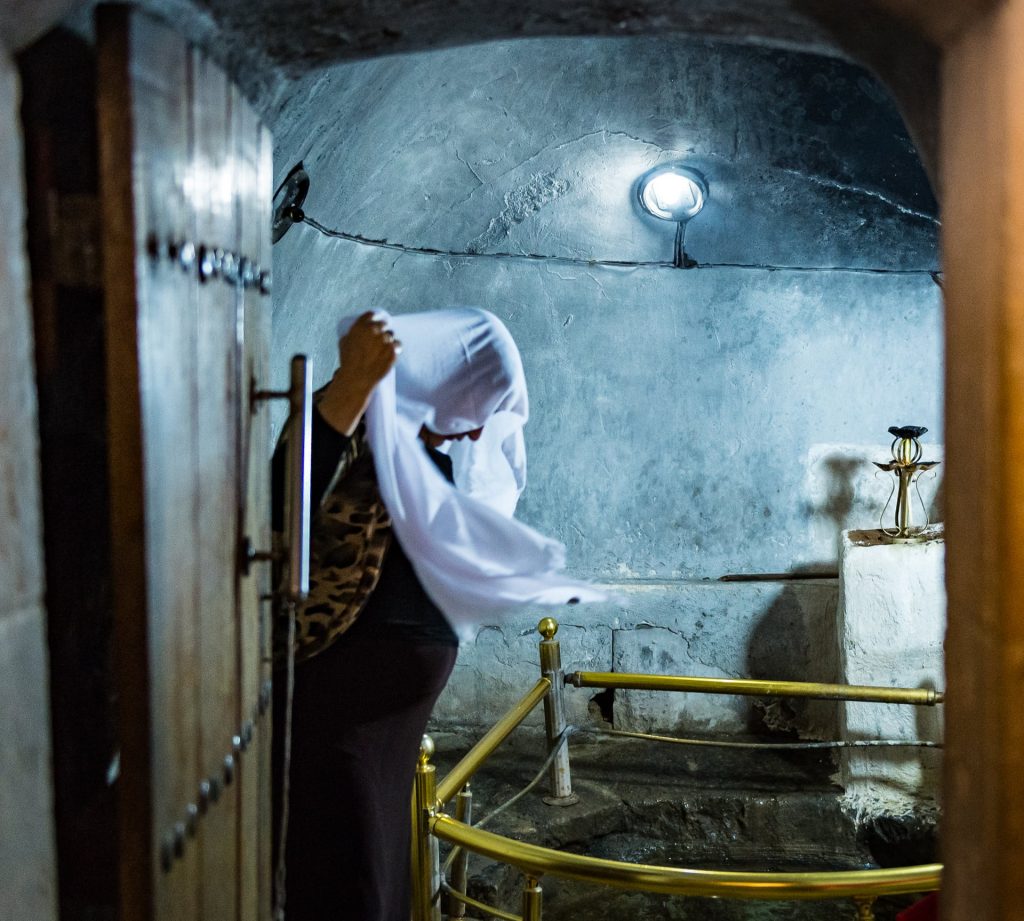 I have been moved reading the article ‘I was sold seven times’: The Yazidi women welcomed back into the faith  In this dramatic and moving break with tradition, the Supreme leader of the Yazidis issued a declaration that Yazidi women would be welcomed back into the faith and community, with a ceremony at their sacred site created for the women, while built on a ceremony they all knew in the form of the ‘baptism’ of their children. The women are welcome to participate in the ceremony as many times as they wish, and those interviewed in the article speak of the healing nature of being able to return and repeat the ceremony as they deal with the trauma of their experiences.

There are a plethora of articles documenting the trauma suffered by Yazidi women after ISIS forces over-ran Sinjar, killing many of the men and boys and capturing and selling many of the women and girls as sex slaves. Programmes have been created to work with traumatised women and girls, many focusing on counselling in safe spaces where women can deal with the deep wounds from their experiences of rape and prolonged abuse.

What is striking about this welcome back in their community is that it is happening within the community, and it is the community creating a safe, inclusive space, using traditions that women know and from which they would have otherwise been excluded. This is a revolution in their religion, reimagining what it means to belong and making it possible to have your identity recreated. The report uses the language of being born again into the faith of their childhood. By reimagining this rite of inclusion into the community and its faith, by opening it to women who have suffered the ultimate in shame and impurity, and which excludes them, this rite has become a rite of healing in a new way.

Zahniser helps us understand the chaos for those who have lost their status and place within a community. While his diagram, below figure 1, describes a rite of passage as one moves from one stage of life to another, it provides a framework for rethinking this new rite of healing. Yazidi women have suffered traumatic separation from lives as they knew it, a deep severing and separation from community, identity and belonging. Their capture became a chaotic, discordant experience of separation. Liminality, as Zahniser describes it, is a time and place that ‘abolishes all socially sanctioned identities, statuses and roles’ and goes on to describe how liminal space renders those in it invisible. (p. 94). The Yazidi community itself has also been driven into this chaotic liminality. The devastation of abuse and violence rendered old ways inadequate and threatened it with complete disintegration.

Tradition would dictate that these women, now impure and therefore a threat to the purity of the community (many carried babies that were conceived by their enemies), should be removed. Honour killings are not unknown in the Yazidi community. Many women have taken their own life, and that of the children of their rape. What could we imagine healing to look like?

From within the community this rite of healing was created. Liminality can be a time of great creativity, even in the midst of the chaos and discord. By embracing the women in the traditional space where belonging and purity is administered, the Sheikh has opened the door for reintegration, both for the women, and for the community as a whole. Creating a new ceremony for women has been an embrace by the religion and its leaders for women who would otherwise never have been welcomed back. The community, despite some internal opposition, is moving forward.

The many traumas suffered by women we work and share life with points to the urgency of learning from the way this one community has reimagined its rituals to embrace for healing. The contextualisation of the rites points us to a number of things.

Firstly, rites of healing need a communal part to them. While counselling definitely has a place, healing in community oriented societies requires a community participation element, as well as (maybe more than?) an individual focus. What could we imagine that looking like for women who are forced to live outside of their communities because of the ravages of war and violence, economic and social marginalisation, or the choices they make to follow a different path to that of their community?

Secondly, rites of healing must address loss of identity and belonging. Fracture and dislocation that means loss and marginalisation needs a response that embraces the fundamentals of belong and identity; that enables women to be embedded in social networks of protection and provision. Rites of healing need to deal with social cohesion in ways that are communally recognised. What can we imagine that could be for women in our communities fleeing the war in Syria, or becoming a followers of Jesus and suffering the burdens of social judgments and accusations? How do they become relationally connective rites that help women find new places of belonging and build identity?

Thirdly, rites of healing must include the possibility of repetition in order for the journey of healing to be fully embarked on. Dealing with matters of purity and shame in trauma is a process, one that counselling acknowledges and which the formulation of rites needs to acknowledge. How could we reimagine rites that we know to be places where women can revisit in their journeys of recreating identity and belonging?

The report noted: ‘the community wants them back’. In relationally connective societies rites of healing are needed that embed women seeking healing in places where they can reimagine being and find protection and provision through inclusion.

Previous Post
When Women Speak, a poem for two voices
Next Post
Grieving with those who grieve
Close