The invisible face of war and conflict 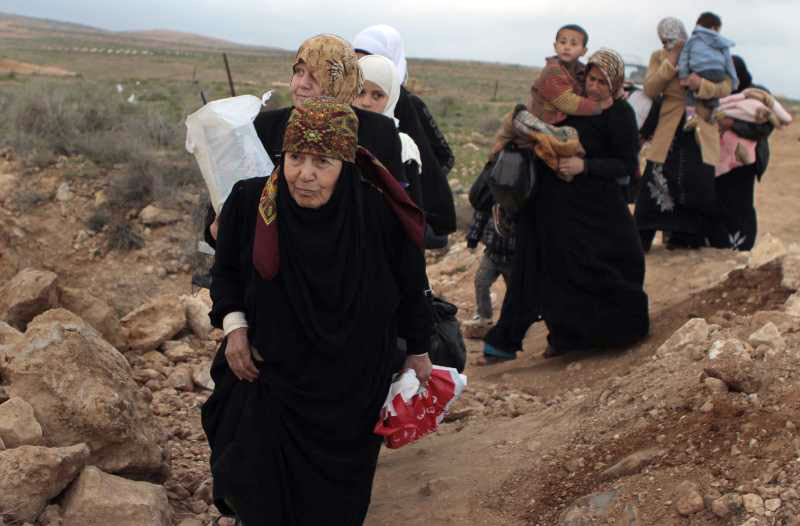 The invisible face of war and conflict

Thirteen tables groups each worked on the profile of a refugee at a gathering I was recently attending. Only two of those thirteen groups profiled a woman.

This does not reflect the statistics. According to the United Nations, 50% of refugees are women and girls. They have been described as the invisible face of war and conflict.

Women and girls experience grim hazards and tragic loss at the epicentre of violence; including loss of family members, often their male guardians because of death, the males fleeing to seek safety from the violence, male participation in war. Women and girls endure harrowing flights from their homelands in search of safety and security in other places. Finding a safe haven abroad is difficult because they often continue to face extreme risks and enormous hardship. Even with resettlement, the trauma of their experiences can continue to challenge their peace and settling.

The list of impacts on them is traumatic just to think through: rape and sexual harassment; trauma and stress; miscarriages and irregular menstrual cycles, complications in pregnancy and delivery; restricted access to health and public service resources; exposure to violence by police, husbands, men they know and men they don’t know; health, environmental and security challenges; lack of papers that make accessing UN refugee resources more difficult; early or forced marriage; the uncertainties of being widowed, divorced or abandoned, or not even knowing which of those they might be; pressured for sex by smugglers, security forces and other refugees; becoming the sole provider for the family; sex trafficking.

Research by Amnesty has shown that women refugees face many of these same problems on European and other safe haven soil as well.

It is a gendered world and women and girl refugees face the challenges of negotiating life in this world.

Some of the UN statistics are staggering. While the UN acknowledges that today 50% of the world’s refugees are woman and girls, only 4% of projects in the UN inter-agency appeals were targeted at women and girls in 2014, and just over 0.4% of all funding to fragile states went to women’s groups or women’s ministries from 2012 to 2014. The distribution of resources is gendered.

Women must negotiate what it is to be a refugee through a gendered framework that is made visible in multiple ways: limited access to health, to education, to security, to economic stability and to the law and legal redress. Access is mediated by gendered social structures and interpretations of inclusivity and life.

Sadly, it seems our ministry among and service to these women might also be gendered. Fran Love speaks of gender-blind missiologies. New Zealand and CMS missiologist Cathy Ross, and Korean American Young Lee Hertig, speak of women being without faces in mission and missiologies. Mission is often experienced as gendered.

The sheer numbers of refugees that has confronted us means the most efficient way of dealing with people is put into operation. But efficient operations are often gendered, failing to recognise the particular and specific needs of women. A friend told the story of a woman refugee just getting off one of the boats that was landing on the Greek Islands. The woman was in distress, with a baby who was also in distress. Rather than herd her along with the rest of the growing number of refugees getting off the boat and being moved to buses, my friend found this woman a quiet and secluded place in a car where she could feed her distressed baby without being vulnerable to everyone watching her. This simple act of service acknowledged the individual needs of a woman whose life was in crisis, and became that cup of cold water offered to Jesus.

I am distressed by the way refugee women are invisible so often in what we do. When I look at the stories of the women and their encounters with God, it reminds me that God sees. They are not invisible to Him. Hagar, forced to flee because of the breakdown of her situation, discovered and showed us that God is the One who sees. Her encounter with God was not a theoretical encounter because she knew who God was. It was God coming to her in her exclusion, isolation and suffering and revealing himself.

Then there is Ruth. Why would anyone make themselves an outsider, an alien and stranger as Ruth did? She was not following her mother-in-law because that would mean wealth and comfort. She laboured long and hard to provide for Naomi, putting herself at risk. Ruth found that God sees and provides, turning mourning and shame into laughter and dancing and rich provision.

Or, what about the Syro-Phoenician woman? She did not belong, and in her pursuit of help suffered abuse and harassment. She was desperate. When she meets Jesus, who shows the disciples how poor their theology was in the light of the real and desperate need of an unclean outsider, He touches her life and brings hope and healing.

These women were visible to Jesus. While in their communities they may have been the excluded invisible face, Jesus shows us that they are seen by him. He demonstrates what it is to reject the norms of society and see the invisible, meet them with love and goodness and kindness, and draw them in to a place of security and hope.

How are our ministries ‘seeing’ refugee women? What steps can we take to ensure they are included and given a place of belonging that brings hope and life in the face of challenges?