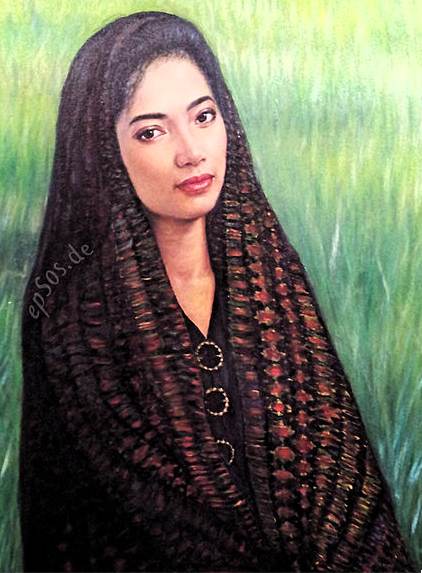 We were having lunch in a café near Sarah’s home.

‘He must love me’ she replied.

Sarah escaped from Syria with her husband and 5 children. In Homs they used to hide under the table while bombs exploded outside. But God heard her prayers and brought them all to Australia.

Why do you think God answered you? I asked. ‘He must love me’. She was immediately embarrassed, as if what she experienced wasn’t what she knew to be true in Islam. He loves other people too, he’ll give them reward in other ways, she said. We tried to untie the knot over the rest of lunch.

In my experience Muslim women want to be near to God. To feel loved by God – whether in war zone or leafy Australian suburb. It’s there they feel safe, a right place, it’s there they feel true happiness. They use terms like being near to God, close to, God is with them. They describe it as a warm feeling, at peace and with a big smile on their face they quote the Hadith “when we take one step toward Allah he runs towards us”.[i] It happens during prayer or a beautiful recitation of the Quran or when fasting. They will describe it as “a fog when praying”; “being held between God’s hands” or it is what they experience in the daily activities of life as they continue to remember God.

But all of this seems to be contrary to the typical view of God in the Quran – a distant god who watches his creation from afar: an impassive controller. But many Muslim women sense or desire his nearness, his presence so much, so that some even say ‘he loves’.

I’ve been trying to work out what they mean.

Ayesha was laughing. We were in a discussion group, a regular meeting of Christian and Muslim women together. Ayesha leaned over to another Muslim woman and said, “Ha ha, they think God is their father, and they’re his children…. they don’t know we are God’s slaves.”

Ayesha came to Australia as a new bride with a new baby. Violence in her marriage and rejection by her in-laws has left her alone. She’s been abandoned by her Muslim community and is constantly confused by her strange attraction to the Christian community, even shamed by it. “Allah brought me here – I don’t blame anyone else. I wish I’d never come.”

“I don’t know. He’s here but I don’t know.” I offer to pray for her. She used to welcome it but now she replies, “Why pray? … it does no good. I will be punished for complaining- but it’s how I feel. I don’t know why he brought me here to Australia. This is his path for me.”

For Ayesha, God doesn’t solve problems (and so why pray to him like that?). It’s up to the family and community to fix things for her. And here, she has neither. Allah’s nearness to Ayesha is how he is directing her life and this means pain.

I told Ayesha the story of the woman at the well last week. “I wish I’d been there then,” she said. “I would have listened to him and watched him. It would have been good to be with him.”

Maryam has come to the west from Syria. Her brother and numerous cousins, uncles and friends have been killed and her family is scattered around the world. Her youngest son has been diagnosed with autism and is now 4 years old, and growing increasingly difficult to manage. Her Muslim community here, even family members, don’t want Maryam and her family coming to visit them. “Alhamdulillah” she says. “God is near because he is giving me these things. In his mercy he is making me a better mother and more faithful in praying”, she says. She can’t cry out to God in pain or anguish because this is not showing him respect. “Alhamdulillah”.

As described in the Hadith ‘Maryam worships God as if she sees him, and if she does not see him she knows that he sees her.’[ii]

Ayesha, Maryam and Sarah know what Islam teaches about God and at the same time are trying to make sense of their experiences and desires. They are trying to come to terms with the practical implications of their beliefs and it is confusing.

How can we communicate the intimacy and joy of God with us as followers of Jesus, when we meet Muslim women who struggle with this dilemma? In the next blog we will explore this issue.

[ii] ‘Gabriel asked Muhammad: “What is Ihsan (perfection)?” Allah’s apostle replied, “To worship Allah as if you see him, and if you cannot achieve this state of devotion, then you must consider that he is looking at you.”’  Al-Bukhari, Book 2, Hadith 47.

In 2008 Anna Shean moved from 14 years in church ministry to an area of Australia which has largest and most diverse multicultural population of Sydney.  Here, she connects with Muslim women and equips individuals and churches to do the same.

Previous Post
The “Problem” of Prayer: Part 2
Next Post
The Nearness of God – Muslim Women’s Perspective & A Response (2)
Close