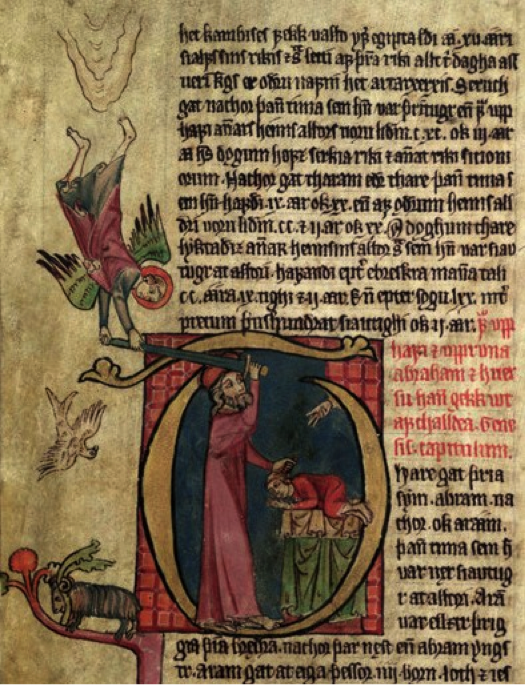 [i]The Bible and the Qur’an continue with the story of the sons of Hagar and Sarah, who became the ancestors of the respective faith communities.

In the Bible, Ishmael’s birth and naming is recorded in Genesis 16:15, when Abram was 86 years old. In the following chapter Abraham prays “Oh that Ishmael might live in your sight!” and God hears him and promises that Ishmael will be the father of a great nation, even while He announces promise-fulfilment through Sarah’s son. Abraham and Ishmael are circumcised together with all the men in the household, according to God’s requirement. When Sarah’s son is weaned, Hagar and Ishmael are sent away into the wilderness, where God meets them and promises his care for them (Genesis 21:17-18). And that is the last we hear of Ishmael until he joins Isaac to bury their father in the field he bought (Genesis 25:9).   The two families apparently retained some contact: later on we hear of Ishmael’s children, when Isaac’s son Esau marries Ishmael’s daughter Mahalath as a third wife (Genesis 28:9).

Isaac’s birth and weaning is narrated in Genesis 21. Genesis 24 describes the trip to find Rebekah, the granddaughter of Abraham’s brother Nahor, as a wife for Isaac (her father’s cousin). Rebekah gives birth to unlike twins, Esau and Jacob. Genesis 26 tells of Isaac following his father’s example in describing Rebekah as his sister, for his own protection: however the local king detects the ploy before any harm is done. We read as much about Rebekah as about Isaac, including when she plots with the younger twin, Jacob, to deceive her husband into giving the younger son the blessing of the firstborn. Isaac’s own experience of receiving blessing at the cost of his elder brother Ishmael is now repeated in his own sons, and God uses Rebekah to accomplish it. Jacob himself later repeats the same reversal as he blesses his grandchildren, through his favourite son Joseph (Genesis 48:8-20). God’s promise is based on his own choice, not on merit or patriarchal primacy. (In an interesting afterword, Simpson notes three examples of Muslim patriarchy where the second son inherited the patriarchy, suggesting that this reversal may be more common than anthropological literature suggests.[ii])

While neither mother is referred to by name, both Ismai’l (Ishmael) and Ishaq (Isaac) are mentioned frequently in the Qur’an.

Isma’il is mentioned with reference to building Ka’aba, and as a prophet. So Al-Baqarah 2:125-7 describe Ibrahim (Abraham) and Isma’il purifying and raising the foundations of the House (Ka’aba at Makkah); and Ibrahim 14:37 references Isma’il living in that region. Maryam 19:54 describes Isma’il as a Messenger and Prophet: and he is listed among three different lists of prophets in Al-An’am 6:86, Al-Anbiya 21:85 and Sad 38:48.

Ishaq is also described as a prophet and in the line of prophets: and his birth according to God’s promise is emphasised in a number of different references. Hud 11:71 tells of Sarah receiving the news of Ishaq and of Ya’qub (Jacob). Al-Saffat 37:112-113 tell of Ibrahim receiving the news of Ishaq, and Maryam 19:49 and Al-Anbiya 21:72 describe Ishaq and Ya’qub as God’s gift to Ibrahim. Al-An’am 6:84 and Al-‘ankabut 29:27 both refer to Ibrahim being given Ishaq and Ya’qub, and other prophets among his descendants (Muhammad is also listed in the latter). Sad 38:45 lists the three generations together, Ibrahim, Ishaq and Ya’qub. And Yusuf 12:6, 38 both mention Ishaq among Yusuf’s (Joseph’s) forebears.

If Isaac’s name appears more frequently than Isma’il in the Qur’an, it almost disappears in the Hadith, where Ishmael comes to prominence.

The lengthy hadith quoted in full at the end of the ‘Hagar’ blogpost describes in detail Abraham’s banishment of Hagar and Ishmael, God’s provision of water for them at Zamzam and their settling there, and Abraham’s three visits to Ishmael. The third visit he finds Ishmael and they build the Ka’aba together. The first two visits are of interest, as they suggest Abraham was as concerned for Ishmael as for Isaac that he find an appropriate wife. On each visit Abraham finds only the wife at home, and each time after talking to her he leaves a cryptic message with her for her husband. On hearing the messages Ishmael decodes them to mean that he should divorce his first wife, but the second one gains Abraham’s approval (“keep firm the threshold of your gate”) (al-Bukhari: Book #55, Hadith #583, 584).

Which son was sacrificed? Neither of them!

The story of Abraham offering Isaac is carefully recounted in Genesis 22. The slow buildup of details adds to the gathering tension, until, just as Abraham is raising his hand with the knife over his bound son, God calls him and forbids him to lay his hand on his son – and Abraham sees the ram caught, and offers it. He names the place “The Lord will provide,” echoing his answer to Isaac’s wondering question about the sacrificial lamb as they carry the wood, fire and knife together to the place of offering.

The Qur’anic account in Al-Saffat 37:101-107, is briefer, but still recounts rather than merely alluding to the incident. In this account, Ibrahim tells his son what he is about to do, and the son affirms it. However the name of the son is not mentioned in the Qur’an. Some Muslim commentators link it to Isaac, whether following the Biblical narrative, or Isaac’s mention so proximately to this story, in Al-Saffat 37:112, in language closely reflecting 37:101 (see also the other Qur’anic references to Isaac’s birth listed above). Other commentators, with the majority of Muslims today, believe it was Ishmael, as the eldest son.

Neither account suggests the response of the mother: was she totally unaware of what was planned? Muslim sources don’t refer to her. Others have speculated about Sarah. Rabbinic traditions suggest that Satan showed Sarah Isaac bound and Abraham with the knife, and she died of shock.[iv] Mary Douglas quotes a Syriac text from late antiquity, where Sarah knows Abraham’s intention, and says to Isaac as he is setting out with Abraham:

“If God desires you for life, he will give orders that you live; he who is the immortal Lord will not kill you.

Now I shall boast: having offered you as a gift from my womb to him who gave you to me, I shall be blessed.

Go then, my child, be a sacrifice to God, go with your father – or rather your slayer. But I have faith that your father will not become your slayer, for the saviour of our souls alone is God.”

Douglas comments, “All the ambiguities of the story are caught by this speech.” (L385)

In both Bible and Qur’an, the focus is on father and son through this event. Genesis portrays Abraham holding almost carelessly to God’s promises, twice putting them in jeopardy by leaving the promised land and letting his wife go into other men’s households. Will his faith now extend to God in turn apparently putting the promise in jeopardy?

The Qur’an emphasises the submission of both Abraham and his son (Al-Saffat 37:103). The New Testament writer of Hebrews points rather to a focus on Abraham’s unswerving confidence in God and his promise (Hebrews 11:17-19). Douglas analyses the ring structure of Genesis 21 to reach the same conclusion (2007:L384).

In her novel ‘Gilead’ Marilyn Robinson has her narrator note the similarity between Abraham sending Hagar and Ishmael off into the wilderness and Abraham going off with Isaac to the mountain (2009:146-7). (Abraham himself had earlier faced being sent away from his father’s house into an unknown country and future.) In each situation Abraham must let his child go, not knowing what would happen to him. And each time God sends angels at the critical moment to intervene to save the child. Faith in God’s promises intertwines with faith in God’s care for our children. The passage is richly infused with intimate father-child language, showing Abraham’s care for his son, reflected with God’s care for Abraham (Genesis 22:1&7, 8&14 and 2&15): and the same language points beyond towards God sending his own beloved Son, in mutual willingness, to wilderness and death (the awaited lamb – Genesis 22:7: the great sacrifice – Al-Saffat 37:107), to accomplish ultimate deliverance for all his children.

[i] From a 14th century Icelandic manuscript of Stjórn: https://en.wikipedia.org/wiki/Binding_of_Isaac.

[iii] These are taken from www.searchtruth.com. I have followed the website use of the more familiar anglicised versions of the names of Abraham, Ishmael and Isaac.