Contact us on admin@whenwomenspeak.net
When Women Speak > Blog > When we pray…

Covid-19 may have locked us down in isolation, but at the same time it has opened up new possibilities for connection.  We’ve zoomed or skyped with friends from decades past, around the world.  And it’s also offered the chance to deepen our relationship with God. My husband and I joined in following the rhythms of morning / evening prayer, linking with others around the world in these shared prayers and Bible reading.  And I took the time to do a one-month prayer retreat at home – committing to spend an extra forty-five to sixty minutes of prayer each day, going through specific exercises and Bible readings, meeting once a week to talk with an experienced friend about it.  It was good to add this to the daily rhythms of prayer, pausing mid-morning to focus more fully on God again and his goodness.

Each time we stop to pray, we put aside other matters and remind ourselves that God and his ways and purposes are preeminent in the world.

The act of salah / namuz is mandated five times daily for our Muslim sisters and brothers.  Even if they don’t manage all five every day, it is a standing invitation to stop and be mindful of God.  In Muslim countries, the call to prayer punctuates the daily hours, a constantly recurring auditory evocation of the summons to prayer. Salah finds its way without drama into everyday life.  Whether preparing a meal, working at an office desk, or having a cup of tea with a neighbour, the Muslim pauses to perform salah, and then returns seamlessly to the kitchen or conversation.

The daily prayer inscribes into the bodies and days of Muslims both mindfulness of God, and even more strongly, mindfulness of the community to which they belong.  That communal aspect is powerfully and physically embodied at the mosque as men join in rows, foot to foot, shoulder to shoulder, bowing, kneeling and standing again together as one.  Men are told to pray at the mosque.  While some women around the world are also finding a place for themselves in mosques, traditionally in Islam women have been encouraged to pray at home: on their own, or in a small gathering of two or three other women or perhaps with a male in the household standing in front to lead the prayer.

But even for women praying at home, or those women or men praying in their places of work or offices, doing salah joins them together with the ummah (community) of Muslims worldwide in praying.  They recite the set prayers in the one language (Arabic).  Together they face a particular direction (towards Mecca).  They join in the prescribed body postures of standing, bowing, kneeling, prostrating.  Body posture gives physical rhythm to the words of prayer.  The times of prayer give their cadence to the daylight hours, expanding and contracting over the seasons with the period between sunrise and sunset each day.  Acting together in time, in orientation of space, in the movement of their bodies, in a common language, the patterns of salah engrave deeply in Muslims their belonging, their membership of a worldwide community, of the population of a virtual worldwide motherland.[i]

Western followers of the Messiah emphasise more the individual, relational aspect of prayer.  Wary of praying for public display, people prefer to find a private place or ‘closet’ to 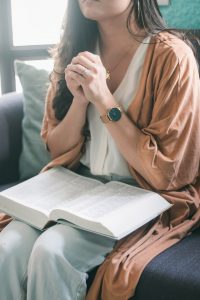 pray in, as we commune with God.  The focus on individual relationship is good and proper.  But in emphasising it we may neglect the experience of the reality of our membership in Christ’s body worldwide, that is gained through shared times and words of prayer.

Monastic communities today still keep the pattern of communal prayer, meeting together to recite the psalms and words of scripture seven times daily.  Members of the Coptic Orthodox community are also encouraged to join in participating in some of the seven times of daily devotion in their agbiya prayer book. Devout members of the Jewish community observe three times of prayer times daily.

We see the prayer life of our Muslim friends as they pause to pray at different times of the day when we happen to be with them.  They may see us perhaps praying for healing, for blessing on a meal or a home.  However most of them will never find their way into a church service. If our prayer life is based primarily in our daily private ‘quiet time’, it means that they never see the depths of our relationship with God: and they encounter no manifestation of our communal identity as worshipers.

Set times of prayer can structure our days around mindfulness of God and his constant presence with us.  Set words can draw us deeply into the Bible, particularly the Psalms (zabur), the ancient prayer book of God’s people. Use of different physical postures (standing, kneeling, prostrating, are all referenced in the Bible) can allow our bodies to unite with our hearts and words in worship of God. When a group of Christian young people working cross-culturally in a Muslim country began to incorporate kneeling or prostrating into their personal prayer, they found themselves experiencing God through their worship in a whole new way as omnipotent Sovereign. 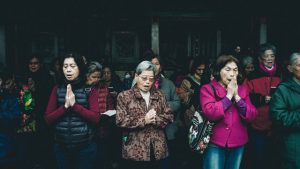 don’t want a return to a legalism that insists on set times and words: nor to make an intimate relationship with our sovereign God a matter of public display.  But maybe as followers of Jesus, of different backgrounds, we can explore together ways of expressing our shared fellowship with the worldwide body of Christ; ways that can also make us more mindful of God’s constant presence, and our abiding participation in worship and in God’s work in the world.

[i] Ummah is linked to the Arabic word for mother, Umm.