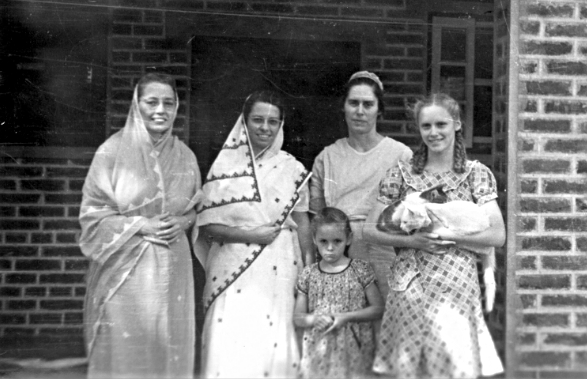 We’re women. We follow Christ. So how do we do daily life?

As women we live in our bodies. It’s in the everyday reality of time, space, being – in the mundaneness of our daily duties where work and relationships outside and inside the home have to be managed, food is sold, bought and prepared, children cry out: and in the earthy messiness of our bodily cycles, where we and those around us have to live with premenstrual tension or period pains or the erratic fluctuations of menopause – that God meets us as we are, not as the people we aspire to become or wish we were! Grounded in our bodies in here and now, we can’t live in our heads: and that’s a Divine gift, because that’s where God calls us to follow Him – not in abstract theological formulations, but how we live out each day who we believe God is and we are.

I grew up in a rural farming community, which was shaped but not constricted by gender roles. Since then I’ve inhabited urban student and academic contexts in the west, small regional towns and central megacities in the Middle East; and visited many other countries around the world – some western, some Muslim, and some nations of other religions. All of these places have involved different tasks to be done in daily life and work; different ways of dressing and of walking, ways of talking, including languages and content, and ways of relating across genders, and between adults and children.

It’s difficult in our own cultures – almost impossible – to realise how much our context shapes our faith practices, and even our faith reading of the Bible. The (often uncomfortable) gift of living in other cultures is the chance to see our own biases, as we meet women living out their lives and faith in response to different cultural issues and life questions. And it may even help us to return and re-read the Bible with new eyes.

So what are the questions that help us as we read the Bible to learn how to live as followers of Jesus in diverse cultures?

The Bible firmly establishes our identity as women. The first chapter of the Bible tells us that all women, with men, are made as Image-bearers of God.[i] Together we carry the Divine Image, and it is not more grounded in one sex or the other. In the second chapter of the Bible, we read that God made woman out of exactly the same substance as man to be Helper to man.[ii] The world ‘Helper’ (Ezer : עזר) – is linked with strength (often military) and with rescue: and in the majority (sixteen out of the twenty-one) times when this word appears in the Bible, it refers to God as the helper of his people.[iii] From the first two chapters in the Bible, we discover that women are created doubly God-like.

Proverbs 31:10 famously begins the description of a ‘woman of valor’ (chayil : חיל)[iv]: and in a common ordering of the Hebrew Bible (Old Testament), this last chapter of Proverbs is followed immediately by the book of Ruth, who is described as a ‘woman of valor’ (Ruth 3:11). Again, the word ‘valor’ when it is used of men, describes warriors of strength and courage, or sometimes wealth. Hence it carries connotations of power; and it is used of a married woman in Proverbs, and a single woman in Ruth.

The Bible doesn’t suggest that women should be weak. I often ask people I’m training in cross-cultural anthropology to find out what the characteristics are of a ‘good’ (or ‘bad’) person in another culture. And similarly, it is helpful to ask your friends in a different cultural context:

What does it mean to be a strong, or honorable, woman – what are her characteristics?

Then take the answers back to compare with the Biblical examples of honorable women.

Women in the Bible are designated primarily by their obedience to God and how they contribute to his covenant people. In the New Testament, they’re defined by their relationship to Jesus as his disciples. Domestic duties (Luke 10:38-42), and even family (including the important relationship of mother), are both trumped by obedience to Jesus and learning from his Word (Mt 12:46-50, Mark 3:31-35). Women are not defined by their roles but by relationships that honor God and others.

What did it look like for women in the Bible to be defined by the quality of their relationship to God, in their families and communities?

The ‘household codes’ in the New Testament[v] offer a new perspective on cultural hierarchies. They don’t demand immediate equality between husbands and wives, masters and slaves, parents and children; but neither do they uncritically reinforce the existing hierarchies. Rather than just obeying those further up the hierarchy in a one-way flow of accountability, the New Testament requires responsibility and accountability to now be reciprocal, going both ways in relationships. Where the Bible talks about relationships between genders, and most often specifically between husband and wife, they are in the framework of mutual honor, mutual authority and mutual submission.[vi]

We note that this is about relationships and attitudes, rather than specific acts or behavior – because what demonstrates helping love in one culture might look different in another culture.

What does it mean to be a strong and honorable woman (or a loving, courageously self-sacrificing man) in the cultures in which you are living?

What behaviors communicate those attitudes and relationships of mutual honor and service?

Some cultures have women and men living similar social roles: other societies are more demarcated along gender lines. And while the division can be restrictive (of women particularly), it doesn’t have to be: I find that I often encounter more strong women in cultures or communities that tend to divide on gender lines. It’s salient that a number of Muslim countries had female presidents before some of the western democracies (including Bangladesh, Pakistan, Indonesia, Senegal): whereas Australia’s only female prime minister didn’t serve a full term, and no woman has yet been president in the US.

Narrow readings of didactic text can blind us to the nuances of different cultural contexts. Stories of women in the Bible are fuller accounts, which offer rich possibilities of learning. In the next post, we’ll ask how we can learn from women of the Bible.

[iv] We find her active in business, clothing and agricultural production, management, and care for her household.

Previous Post
The Nearness of God – Muslim Women’s Perspective & A Response (2)
Next Post
Women of the Bible – what do they teach us?