Women, the seventh face of Islam? 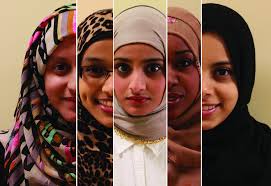 Women, the seventh face of Islam?

I am indebted to the work of Dr John Azumah, who helps us recognise the diversity that there is in Islam. Through what he calls the ‘five faces of Islam’, he helps us examine the way that our different Muslim friends interact with, experience and enact their religion.

These different expressions of Islam include: the missionary face, through both da’wa, the call or invitation to the straight path, and through polemical engagement with Christianity, some Muslims seek to commend Islam so others will follow it too; the ideological or political face of Islam emphasizes the legal and political content that sees Islam as a complete way of life, Islamizing the public square; the mystical face or popular Islam, brings religion into the experiential, giving focus to the supernatural and connecting with God personally; the militant face of Islam seeks to achieve political ends through the use of violence, drawing inspiration from parts of the Qur’an, a romanticized Islamic history, and selected texts and traditions; the progressive face Islam are self-identifying practicing Muslims who seek reformation within Islam, arguing for Islam from liberal values.

A friend of mine added a sixth face, the refugee face, one that in the context of today’s world is the daily life experience of many hundreds of thousands, if not millions of Muslims. The three countries from whom the most refugees come are Syria, Afghanistan and Somalia, all Muslim majority countries. For many of our Muslim friends, their daily experience of faith is in the context of violence, insecurity, vulnerability, homelessness, fear and a sense of abandonment. They are the people streaming into no-man’s land, in Turkey, Jordan, Greece, Lebanon and so many more places.

There is another face of Islam though. It can be found in each of those faces, but at the same time it is different. Women. Women’s experience of their faith is significantly different from that of men. Maybe they should constitute the seventh face of Islam.

Women experience God differently. Their experience of God less intensely shaped by the Qur’an and because of this their understanding and experience of God is much more relational. Writing of her conversation with Muslim friends, a colleague said: They were all emphatic that God is close, and made statements such as, “Sometimes when I pray, I raise my hands and eyes to the sky. Sometimes I feel like he is directly inside my heart and spirit,” and “When I say God’s name, I feel my heart beat,” and “Because I am a Muslim, I am friendly with God… we should talk directly to God.” And the euphoria on their faces when they talked about this led me to believe they were really genuine. In fact, their relational view of God was very attractive and it was almost infectious!

Life stages play an important role in how women experience their faith in Islam. Another colleague wrote of her community: Girls become accountable to God for sins and ritual prayers when they have their first period. From then [they] receive punishments and rewards from Allah for their actions. This event is something she would usually share with her mother who would inform the father that their daughter has become a woman. Although no official ceremony happens, the woman often begins to wear hijab from this point and begins removing hair each month from her body. The significance of this transition really struck me. It’s so tangible. It radically affects daily routines and how women look to their community, the shape of their days. It also struck me the importance of the transition in taking their place the community. A physical change impacts your spiritual status and your spiritual status impacts how you should now dress and behave in the community.

Being clean or unclean clearly affects the way a woman practices her faith. For extended periods of life between the ages of at least 15 – 55, women in Islam are limited in the ways they can practice their faith. An unclean or impure woman cannot pray, fast, read the Qur’an. One friend learned this from her Muslim friends: that there is clearly a distinction between two types of impurity, a) the type that comes from physically touching unclean things or sexual intercourse or menstruation and b) an impurity that comes from the heart being unclean or unclean thoughts. Certainly the emphasis is on the former. We then talked about how to purify oneself in both respects. Physical impurity seems neater and easier to fix, but … although my friend talked about thoughts etc making you unclean there didn’t seem a concern to purify from little sins like evil thoughts before praying. Our conversation turned to the holiness of God and how we can’t come before a holy god with unclean hearts. And it raised a different issue of why uncleanliness is an issue preventing prayer and religious activity. For my friend impurity is not about the holiness of God or a broken relationship.

While honour is important for all the community, the burden of honour seems to lie with women, who carry the honour of the community in their body. A colleague noted: The protection of honor certainly seems important for women in respect to their communities and not wanting to bring shame on them. My friend talked about how when she sees women poorly (read immodestly) dressed she sees that as bringing shame on their father who has let her go out in public like that. I have a friend here who has had a secret relationship with a Christian man for several years now. As a Muslim she says that if her family ever find out they would kill her because of the shame, but running away and eloping is also not an option because it would bring shame on her family and no one would ever marry her 4 sisters. The importance of the preservation of women’s honor clearly has implications for their whole community.

Women’s practices of Islam often appear ‘not-orthodox’, and while orthodox Muslims, particularly of the Wahhabi and Salafi expressions of Islam, say it is not Islam, and many women are reticent to talk about it, it is central to the practice of Islam for many women. After conversations with Muslim friends a colleague wrote: it seems the distinction between orthodox faith and folk islam was a bit blurred. For example my friend spoke mostly about certain prayers or verses from the Quran that you say at certain times. Like going into the bathroom to protect you from the jinn, repeating certain prayers 70 time so you will get married, saying certain prayers a number of times to do well in exams… saying certain prayers so the professor doesn’t see you if you cheat in the exam. And I get lots of chain messages on whats app that threaten if you don’t pass on a certain aya from the Quran you will go to hell. Things that resemble prayer, but seem a bit more like folkish activities.

So, I would argue that women are the seventh face of Islam. Perhaps that label is not so important as exploring ways that they meet and walk with Jesus. Stories of Jesus’ encounters with women point us to God’s profound understanding of the different ways women experience him and their relationship with him. Look at the Samaritan woman, the woman with the issue of blood, the Syro-Phoenecian woman, the woman caught in adultery. Or what about Hannah, Ruth, Esther in the Old Testament.

What stories of Jesus help us explain the depth of God’s love, compassion, and kindness to women? What are the needs of Muslim women in their’ experience of religion that Jesus can transform? Spend some time exploring Jesus encounters with women and let him show you how he can bring transformation in Muslim women’s lives.

Previous Post
The Status of Muslim Women and the Gospel
Next Post
How do Muslim women do theodicy?
Close