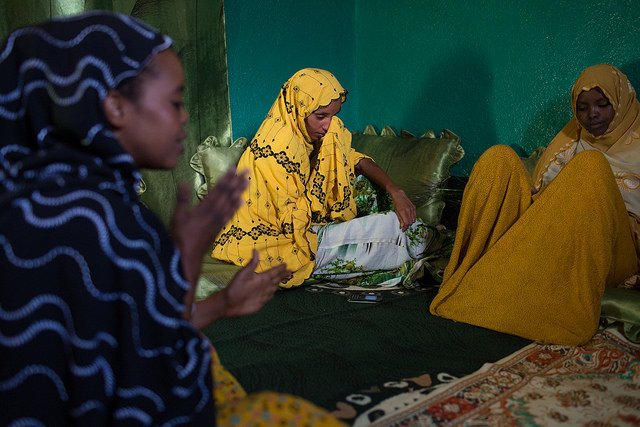 The previous two posts discussed shame ascribed to women, and embodied in women’s bodies. Jesus’ interaction with women who carried socially ascribed shame enabled their public vindication. Jesus took on the shame of human bodies in his incarnation and particularly in his shameful crucifixion and death.

Embodied shame finds particular and universal female form in menstruation. Menstruation is both a specific and all-inclusive aspect of how shame may be embodied in the natural cycles of being women.

Germaine Greer controversially highlighted this central dimension of being female in her recent comment, “If you don’t find your pants full of blood at age 13 then you don’t understand what it is to be a woman.” Most women have either experienced, or fear, the intense shame associated with menstrual blood leaking and becoming evident to those around us. Used sanitary objects evoke far more visceral disgust than something like a bloodstained bandage. Menstrual blood is one of the few substances around which there is widespread, almost universal taboo, with different meanings, around the world.[i]

Beyond the personal dimension of associated shame, in most major religions, menstruation is linked with ritual uncleanness, and women being unable to participate fully in communal piety.

For example, within Islam, Muslim women cannot perform the daily salah prayers, join in fasting, or hold or recite the Qur’an when they are menstruating. In many Muslim communities, they are not allowed to enter the mosque during this period.[ii] Some suggest that it is God’s mercy that women are not allowed to join these religious duties during their menstruation. One female mosque teacher told me: “Now fasting and salah are tiring and exhausting and the woman during her monthly period loses a lot of her blood and her time, and fasting and even salah become extra exhausting. And so she isn’t ready to pray and the blood which issues from her is unclean: but this matter is to do with worshipping God, so during her menstruation she doesn’t pray.” A website agrees:

“Many women suffer from extreme cramps, heavy bleeding, nausea, headaches, and other maladies during their cycle. It is truly a sign of the mercy of Allah Almighty that we are excused from prayer during this time. I know more than one sister who would be unable to perform the physical duties of the prayer during her cycle.”

While some may feel this taboo as a mercy, others are more skeptical. And an authoritative and well-known hadith on women ties it directly to women’s deficiency:

Narrated Abu Said Al-Khudri: Once Allah’s Apostle went out to the Musalla (to offer the prayer) of ‘Id-al-Adha or Al-Fitr prayer. Then he passed by the women and said, “O women! Give alms, as I have seen that the majority of the dwellers of Hell-fire were you (women).” They asked, “Why is it so, O Allah’s Apostle ?” He replied, “You curse frequently and are ungrateful to your husbands. I have not seen anyone more deficient in intelligence and religion than you. A cautious sensible man could be led astray by some of you.” The women asked, “O Allah’s Apostle! What is deficient in our intelligence and religion?” He said, “Is not the evidence of two women equal to the witness of one man?” They replied in the affirmative. He said, “This is the deficiency in her intelligence. Isn’t it true that a woman can neither pray nor fast during her menses?” The women replied in the affirmative. He said, “This is the deficiency in her religion.”  (Sahih Bukhari Book #6, Hadith #301)[iii]

It is noticeable that while the categories of minor impurity in Islam are not gender specific, all those of major impurity concern women: menstrual flow, emission of sexual fluid or sexual intercourse, and childbirth (for about six weeks). Marjo Buitelaar notes that although “this only means that women are more often impure but certainly not inherently more impure than men, in practice women tend to be more strongly associated with impurity than men.”[iv]

Anthropologist Mary Douglas’s famous definition of dirt as ‘matter out of place’ explains the widespread fear of bodily fluids (that enable women’s God-given reproductive capacity), when they are outside the woman’s body. The same definition helps us see how, when women’s sexuality is understood as the property of men, then control or removal of the female body can be justified in order to prevent it being ‘out of place’ or shameful or ‘dirty’. Female genital mutilation is a form of violent control cut into the bodies of women, to remove any possibility of sexual enjoyment for women. In the most extreme form of FGM, both menstruation and sexual intercourse are painful, and childbirth is only possible by cutting the woman open, and re-sewing her afterwards.

Embodied shame – Born of a woman

What then to do with the incorporated shame, and religious ascription of ritual uncleanness, to women during menstruation or after childbirth? An earlier post on this blog discusses purity as contagious through Jesus Messiah. And here I want to explore a further dimension.

Much has been made of Jesus’ incarnation as a man in time and space (including around issues of women’s capacity or power to vote).[v] But God’s good news in Jesus brings a further dimension to impurity and shame as it is embodied in women, and in their reproductive fluids. In the gospel of Luke we hear that the first public announcement to the cosmos of God omnipotent becoming present in human form takes place in a conversation between two pregnant women.[vi] 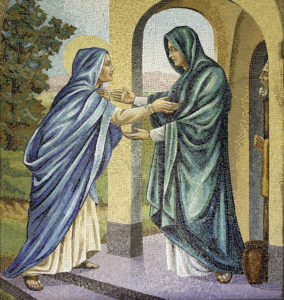 Yet his deeply felt cultural understanding of the ritual uncleanness and shame of women’s bodily fluids meant that a colleague of mine could not accept that God had taken human form and been born in the messy uncleanness of a woman’s womb and birth canal. For him, it was impossible that God could become incarnate in that dimension of impurity and shame.

The Bible tells us that in Jesus Messiah, God took human flesh and was born – of a woman. So this means that women’s bodies, with all the ritual uncleanness of menstrual fertility and birth, are made the vehicle of God’s incarnation. Through God’s inhabiting, women’s bodies are made holy and honoured forever.

[i] Buckley, T., Gottlieb, A. (Eds.), 1988. Blood Magic. The Anthropology of Menstruation. University of California Press, Berkley and Los Angelos.

[ii] However there is also a Hadith in support of menstruating women attending the mosque: ‘A’ishah said: The Messenger of Allah once told me to get his mat from the masjid and I said, “I am menstruating!” He replied, “Your menses is not on your hands.” (Sunan Abu Dawud vol.1, no. 261 and Sahih Muslim vol.1, no. 587). www.searchtruth.com.

[v] Sojourner Truth, in her memorable speech on women’s suffrage, commented: “Then that little man in black there, he says women can’t have as much rights as men, ’cause Christ wasn’t a woman! Where did your Christ come from? Where did your Christ come from? From God and a woman! Man had nothing to do with Him.” https://sourcebooks.fordham.edu/mod/sojtruth-woman.asp.

[vi] Luke 1:39-55. In the same way the news that God incarnate had defeated death forever and was raised to new life, was given first to and through women (Luke 24:1-11).

Previous Post
Women’s Shame – 2
Next Post
The Hospitality of God in the context of faith conversations: the Prophets Stories
Close