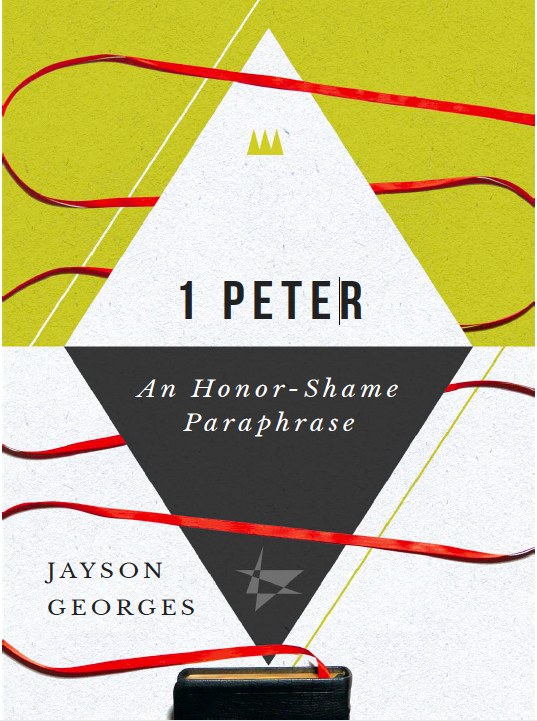 In recent years the twin themes of Honor and Shame have gained increasing prominence in both Missiology and Biblical Studies (for some related blogs on this website, see the links at the end of this review).   The Honor Shame website has been an important contribution to these discussions. Now Jayson Georges has begun the ambitious task of producing Biblical paraphrases that help western readers understand the way these themes inform the Biblical writers, beginning with 1 Peter and Esther. This is a review of the 1 Peter paraphrase.

This epistle is a letter for our time, with its themes of diaspora, community, identity and suffering, as populations are dispersed around the globe in today’s world, and Christians are the most persecuted group of people worldwide. And one Bible commentator notes that there are few biblical writings “in which the issues and language of honor and shame are as prominent and pervasive as the letter of 1 Peter.”[i]

Georges begins with a Series Introduction, reminding us of the importance of implicit information in making sense of a text, and highlighting some of the cultural themes in the world of Biblical writers with which western writers are less familiar. He usefully notes the relational dimension to ‘faith’ (Greek: pistis), and explains his use of alternate terms for this and some other Biblical terms which have become so well worn as to blunt our understanding of them.

The actual paraphrase is preceded and followed by letters from an imaginary church leader in Asia Minor, somewhat in the style of The Lost Letters of Pergamum[ii], which give the socio-cultural and historical context (Letter 1) and summarize the theology (Letter 3). These are helpful in reading the letter. In ‘Letter 1’, while honour could have been emphasised even more as the preeminent currency of life at that time, the questions give a poignant and strongly-presented context to the letter: “How might we resist shame and endure suffering? … If families and neighbours no longer welcome and honor us, how do we function in society? What is our status in God’s eyes?”

‘Letter 2’ is a rich paraphrase of 1 Peter. Verses are marked in clusters rather than individually, which gives both cohesion and a helpful reference point to the text. Its vivid style enhances the meaning of the text, including alliterative gems such as ‘God gives face to the faithful, but he rejects the rejecters;’ ‘It is better to be persecuted for virtue than to be punished for vice;’ ‘The faithful one rescues the faithless, and he brings us face to face with God;’ and to the elders, ‘Do not fleece the flock!’ (3:12, 17,18; 5:2) And this rendering of the text clearly shows how Christ both exemplifies (1:10,21), and calls us to (5:6) the Status-Shame-Exaltation paradigm.[iii] The use of ‘moral compass’ for ‘conscience’ (3:16, 21) also helpfully conveys the relational aspect that is sometimes missing in a more individualised reading of ‘conscience’.

I’m not sure why the Hebrew ‘shalom’ was introduced for ‘peace’ at the beginning and end of the letter. In some Muslim cultures it may be unhelpful. If ‘peace’ was inadequate, perhaps a term like ‘wellbeing’ could have carried it. And some of the ‘purity-defilement’ theme of the letter, which links strongly with honor-shame was perhaps diluted. On the other hand, the rendering of 2:21-25 abundantly conveyed the shame dimensions of the underlying Isaiah 53 passage.

The paraphrase headings follow the traditional chapter breakups, which effectively obscures the link of the exhortation to wives and husbands (3:1-7) back to Christ as the suffering lamb in 2:21-25, seen through the repeated ‘in the same way’ (homoios), 3:1, 3:7. This reversal of traditional hierarchy flow of honor with wives and husbands in 3:7, seems to also carry over to elders and young people in 5:1-6, and the paraphrase loses the recurring ‘in the same way’ in 5:5.

‘Letter 3’ is a cogent summary of the dimensions of honor, community and suffering in 1 Peter, with terms such as ‘acceptable rejects’ both succinct and communicatively rich. It could go further in affirming that Christ goes beyond being a model (point One), in actually taking on himself the shame of our sinfulness and separation from the Father: that the alternate honor that we receive from the Father (point Two) is actually the honor which belongs to Christ himself: and that we are now invited to join Jesus himself in suffering and shame (point Five).

Overall I warmly commend this to you as a fruitful and helpful presentation of 1 Peter, which enables us to read it more in its own context, and to bring its teaching into the contexts we face today.

[ii] The Lost Letters of Pergamum: A Story from the New Testament World, by Bruce W. Longenecker (2002) An excellent introduction to the dynamics of patronage and honour in the world of the early church.

Previous Post
Women and Christian Mission: ways of knowing and doing theology
Next Post
Many Beautiful Things – The Life and Vision of Lilias Trotter
Close