Beyond Veiled Clichés: the real lives of Arab women 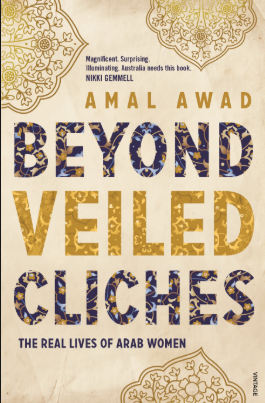 Beyond Veiled Clichés: the real lives of Arab women

Clichés and stereotypes about Arab women abound: powerless and helpless, submissive, supressed and oppressed, voiceless, sometimes ‘exotic,’ homogenous. Beyond Veiled Clichés is one Arab woman’s effort to change these perceptions, and to allow the voices and stories of Arab women to be heard on their own terms. Amal Awad is a Palestinian-Australian journalist and writer who interviewed more than sixty Arab women, primarily Muslim but also some Christians, in both Australia and the Middle East. As well as telling the stories and sharing the opinions of the women she interviewed, Awad also narrates some of her own experiences and journey. Beyond Veiled Clichés is a helpful read for women working with diaspora Muslims around the world, because of the pertinent issues which Awad addresses.

One prominent theme that of identity. This comes through not only the chapters which discuss veiling and the challenges of identifying as gay, but also particularly through the chapters titled “Trauma and Identity” and “Religion and Culture.” Awad and others describe how hard it was to grow up in Australia as a ‘hyphenated’ individual—both Arab AND Australian, yet not enough of either (in the view of their parents, not Arab enough; in the view of Australians, not Australian enough); torn “between a society struggling to accept them and a culture that binds them to ideas not always easy to adopt in a foreign land.” Arab-Australian women talk about how they have to balance, or battle, competing identities, allegiances, values, and expectations. As a consequence of this balancing-act, Awad contends that Arab women in Australia are more likely to prioritise their Arab identity than women in much of the Middle East, where one’s “Arabness isn’t likely to be the focus.”

Both Muslim and Christian background women describe childhoods full of restrictions. These were often imposed due to their parents’ fear that they would lose their Arab identities, and are also related to their mothers wanting to give them the best of what was lost in migration—families, language, and culture. As a result, women tell of the pain of being ‘different’—not being allowed to eat what others eat, being forbidden to attend camps or sleep-overs, being forbidden from participating in extra-curricular activities, having to ask permission to go out with friends. On top of that, the women describe the pressure of being forced to defend themselves, their religion, and their heritage in the face of racism and discrimination. In the process of trying to work out who she is, Awad tells of the various times in her youth when she became devoutly Muslim, or fiercely Palestinian, and explains that many women “over-identify.” Others tell of their efforts to resist an Arab, or a Muslim, identity, finding connection and a new identity in veganism, environmental activism, or social justice. They all lament “The discourses of East versus West, of Islam versus the West … [which try] to force a choice between ideas, rather than allow the development of a combination.”

A second theme that emerges is that all over the Arab world women are working as agents for change. Many of the women Awad interviewed are involved in efforts to provide various forms of assistance and support to women in their home countries. These include using art therapy to address mental health issues in traumatised Lebanon, providing education to Syrian refugee children in Lebanon, fighting for justice for women in Jordan’s legal system, and supporting queer Palestinian women.

Women who are working with refugees in the region offer some sobering assessments of the situation. One woman working with Syrian refugees describes how the men are so traumatised from war that they are unable to work. The burden of providing for the family then falls on the women of the households, who invariably have little or no education. Refugee women therefore need to be empowered to improve their lives and taught to be self-sustainable, yet a criticism of both local and foreign NOGs is that they are not teaching them these skills. Rather, those NGOs “have become a business … a way to influence, politically mostly.”

The voices of these Arab women are particularly strong. Over and over they remind the reader that “Arab women issues are universal issues – women’s issues, people’s issues, human beings issues.” They neither want nor need Western intervention—they have the wherewithal to address their issues in culturally appropriate ways. They want to be shown respect, and to be acknowledged for what they have and can achieve as “activists for transformation.” In Australia, Arab women fighting for justice feel disempowered by Western authorities who intervene in issues of domestic violence or early and forced marriages, controlling how the problems are resolved while not allowing them, or their communities, the right to address these issues themselves.

Beyond Veiled Clichés is a thought-provoking read, offering multiple fresh insights into the lives of Arab women both in the Arab world and in the diaspora community of Australia. It provides a down-to-earth avenue for Arab women’s voices to be heard on a variety of topics, not shying away from those which may seem more sensitive, such as sex. The readable, journalistic style to me made the women’s stories more accessible than those of the women interviewed in Susan Carland’s Fighting Hislam: women, faith and sexism. If nothing else, Beyond Veiled Clichés reminds us all to take time to really listen to the voices of the women we seek to connect with.

Louise currently lives in Melbourne, Australia, with her husband and two sons. She helps to equip cross-cultural workers, works as a researcher with When Women Speak…, and teaches English as an Additional Language in the adult education sector. Louise and her family served in Indonesia for six years, where she taught English at universities and enjoyed engaging with her predominately Muslim students and colleagues. Her educational background was in Chinese studies, and she lived in China for three non-consecutive years; first as a student, and then as a teacher and participant observer in the secondary education system. She has a PhD in East Asian Studies from the Australian National University.