Contextualisation of the Gospel: Towards an Evangelical Approach in the Light of Scripture and the Church Fathers 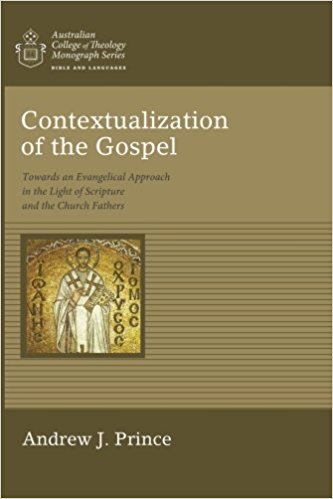 Contextualisation of the Gospel: Towards an Evangelical Approach in the Light of Scripture and the Church Fathers

Title: Contextualisation of the Gospel: Towards an Evangelical Approach in the Light of Scripture and the Church Fathers

Andrew J. Prince’s book Contextualisation of the Gospel demonstrates that drawing principles for contextualisation from both a study of the Scriptures and writings of early church fathers meaningfully contributes to an evangelical approach to missiological methodology.

Prince outlines his methodology, results and conclusions in a way that the average reader is able to understand and provides a noteworthy thesis for evangelical missiologists involved in contextualisation.
Prince begins by presenting a helpful history of the contextualisation debate from which he argues that most of the evangelical contextualisation debate has been mainly driven by insights gained from anthropology and practical theology rather than from Scripture or writings of the church fathers. His book is an attempt to rectify this situation with Prince proposing several contextualisation principles obtained through his investigation of the book of Acts, in particular the speeches in Acts, and the early church father John Chrysostom.

From his investigation of the speeches in Acts, Prince comes up with 8 principles of contextualisation, these are:
Principle 1: The early establishment of common ground provides a platform for the good news to be heard.
Principle 2: The gospel needs to be explained in ways that engage the worldview of the target audience.
Principle 3: Faith in Jesus does not necessarily mean social dislocation. (1)
Principle 4: There is no fixed presentation of the gospel as contextual sensitivity requires flexibility. (2)
Principle 5: There is a core content to the gospel, which is for all cultures. (3)
Principle 6: Cultural pressure must not lead to a dampening down of the challenging demands of discipleship.
Principle 7: Existing cultural terms and forms can be used and given new meaning in light of the gospel.
Principle 8: Culture is both positive and flawed needs redemption through the gospel.

Prince accepts that most of these principles are already present in modern contextualisation discussion, but argues that principle 6 provides a caution against the insider movement and Principle 7 supports the idea that some cultural forms (such as the removal of shoes and the lifting of hands) can be adopted into Christian worship. (4)

Before Prince presents his findings from John Chrysostom he outlines the history of the use of early church fathers by evangelicals, highlighting the enthusiasm for referring to them and the caution for applying their context too readily to 21st Century context. The reasons given for exploring principles in John Chrysostom is because his theology of scripture and understanding of the gospel is consistent with evangelicalism, and because he had a significant interest in mission and his cultural environment and worldview corresponds in some way to present mission contexts in Asia, Africa and Latin America.
Chrysostom is also an ideal church father to study because he was a forerunner in the promotion of proactively adapting the gospel for ones audience in order to promote understanding, and he engaged with issues such as syncretism and cross-cultural proclamation.

Prince highlights Chrysostom’s use of the Bible to condemn the involvement of Roman Christians in Jewish worship practices. (5) Prince argues that this is a warning to those who want to argue that Christians can retain some of their previous religious practices. In particular, Prince argues that the principles found in Chrysostom’s writings challenge advocates (6) of the insider movement who emphasise meaning over form and that Christians from a Muslim background can participate in Islamic forms of worship.

However, while Prince acknowledges that Chrysostom is talking about Christians who have not come from a Jewish background there does not seem to be an appreciation of the difference between Gentile Christians adding Jewish forms of worship and Muslim background Christian continuing in Islamic forms of worship.

While Prince highlights the importance Chrysostom placed on scripture he does not discuss the appropriateness of Chrysostom’s use and interpretation of the Biblical texts. There is therefore, a need to discuss what the Bible says about whether a Jewish Christian can continue to go to the synagogue, whether a Gentile Christian should participate in Jewish practices and then an argument needs to be presented as to whether the synagogue can be likened to other places of worship in other religions.
The final sermon by Chrysostom that Prince reviews affirms the legitimacy of Gothic Christianity as authentic Christianity and reiterates that there is no shame for the church in having barbarian Christians among them during a time when Roman Christians were struggling to accept the ‘barbarian’ Gothic Christians as the presence of Christian Goths is a fulfilment of Scripture and they are equally part of the kingdom of God.

Andrew J. Prince identified 15 principles for contextualisation, showing that both the Bible and the church fathers have the potential to contribute to the contextualisation debate. As Prince acknowledges, it is not an exhaustive study of the entire Bible and only explores one church father. Prince urges missiologists to further investigate other Biblical Texts, in particular Old Testament scriptures, as well as to study other church fathers such as Bede and Gregory the Great.

(1)  That is, Jewish believers in Acts retained their Jewish culture and community.

(2)  Preachers in Acts present the gospel message in a way that their audience can relate to.

(3)  In Acts, Jesus is the way for salvation through his death and resurrection. In Chrysostom’s sermon to Gothic Christians he emphasises the virgin birth as a way to connect to the role of the ‘barbarian’ Magi.

(5)  Chrysostom is preaching to people who were being involved in Jewish religious practices and seeking healing from Jewish healers and he saw this participation as syncretistic and a denial of Christ’s death, arguing that synagogues are powerless, evil, and a god dishonouring place to be avoided. Prince, Contextualisation of the Gospel, 190-194.

(6)  Prince argues in particular against Phil Parshall and Rick Brown. Prince, Contextualisation of the Gospel, 197

Short Bio of Reviewer:
CH is an Australian who grew up living overseas and has lived the last 13 years in the Middle East with her family. She now lives in multicultural Australia working with Culture Connect, Interserve providing training in Cross Cultural communication and understanding.