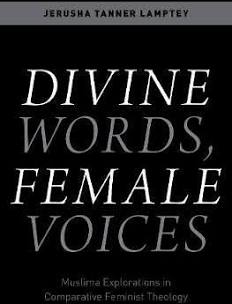 Divine Words, Female Voices is a rich addition to the voices of women exploring faith through theology. The unique contribution of Jerusha Tanner Lamptey is to bring together feminist voices in theology from both Muslim and Christian faith traditions. Lamptey opens up conversations that seek to learn from the other. As a Muslim woman she reflects on the challenges she feels in the interpretive framework of her own traditions through conversations engaging the work of a range of women theologians in the Christian tradition.

I am aware that those from evangelical traditions will not resonate easily with those from the Christian tradition used by Lamptey, however I believe this is an invitation to women from that tradition to engage in conversations that explore how their faith experience speaks to the challenges women encounter in negotiating their day to day realities.

This book adds to the range of works by Muslim women who are seeking to find inclusive faith expressions within articulations and interpretations of Islam. Lamptey builds on the work of Amina Wadud, Asma Barlas, Ayesha Hidayatullah and others who seek to give voice to a woman-inclusive interpretative framework in Islam. Each chapter surveys the present work in Muslima Theology, engages a conversation with the theologies of Christian feminist scholars and concludes with the lessons, questions and challenges Lamptey draws for ongoing conversations in the development of Muslima theologies.

Lamptey believes there is significant learning to be done through comparative theology studies. While acknowledge a range of challenges around interpretative strategies, power, privilege and lack of knowledge, she writes: ‘I argue that the approach of comparative feminist theology provides a means to skillfully navigate these challenges, and reveal novel, constructive trajectories in Muslima interpretation of the Islamic tradition. I use this method to identify a meaningful and unique point of entry into comparative theological analysis of Islamic and Christian feminist theologies.’ (p. 18)

A significant shift is made in finding the starting point of comparison. The ‘Divine Words’ through which these conversations are held centre on comparison between Qur’an and Jesus. Lamptey explicitly notes this shift from the traditional comparisons of the Prophet Muhammad and Jesus, and the Qur’an and the Bible.

The issues given focus in the book start with Lamptey’s argument for the essential work of comparative theology. She says that a deep knowledge of other traditions is needed to give a fresh lens for exploring one’s own tradition, and must include an acknowledgement of what is similar while not whitewashing the significant differences. This is something she pursues through the chapters that follow. She calls for the development of specific strategies for comparative engagement.

Lamptey explores understandings of the Qur’an as the word of God, questioning the role of historical time and place, and the particularities of verses that seem to address only men, for example. This raises questions between what she considers egalitarian and non-egalitarian verses leading her to explore through the work of other Muslim women scholars, such as Kecia Ali, the limitations or challenges of a Qur’an-centred approach to addressing women’s issues. Her exploration of Christian theologies centre around responses to Jesus’ question ‘Who do you say that I am?’, invoking issues of language and symbolism regarding assertions of Jesus humanity and divinity. She points to feminist re-interpretations of Jesus’ encounters with women in particular.

Acknowledging that the Ahadith are often problematic for women who are seeking the formation a just society within Islamic Theologies, Lamptey tackles hermeneutical approaches to the Qur’an and the Bible. She suggests that Islam, and Muslim women in particular, cannot blame negative interpretations within Islam on understandings adopted from, mostly, Christianity. Issues such as woman created from the crooked rib of a man, women as the sources of evil are often dismissed as unIslamic adaptations from Christianity. Lamptey says that to do this is to ignore the challenges that exist within Islam itself.

An interesting, and perhaps provocative, comparison is made between the Prophet Muhammad and Mary as exemplars. She asks questions of the maleness of the Prophet and how he can fully be an exemplar for women, and specifically feminists. This includes challenging commentary on the normative nature of males in defining humankind and religion. There is little material examining the maleness of the Prophet so Lamptey is venturing into territory that is not greatly documented. She seeks to bring a range of diverse material together in the discussions in this chapter.

A further chapter examines human nature and transformation, and while highlighting inherent differences between Islam and Christianity, the chapter addresses the centrality of the fundamental concepts of taqwa (God-consciousness that shapes all action), tawhid (the unicity of God), fitra (original disposition of humans as created by God), and khalifah (trustee or representative). The exploration of Hagar through the lens of taqwa is a helpful rereading of this story and raises questions for the way Christians engage this story.

Issues of authority and voice are examined through discussions on women leading prayers. The discussion draws out a rejection of tradition as a fixed ahistorical entity, speaking of its dynamic and political nature and foregrounding processes of development and change, the role of experience, and internal diversity of perspectives and practices. (209)

This book makes an important contribution to women’s theologies through its exploration of the contribution of comparative developments in Muslima and Christian feminists works. By focussing on several significant topic areas it addresses issues that women must negotiate in their everyday lives when they seek to live their faith. For those from Christian traditions not included in the conversation, there is, I believe, an invitation to explore lived faith in conversation with our Muslima sisters that we together might know God more.