Excellent Daughters: The Secret Lives of Young Women Who are Transforming the Arab World 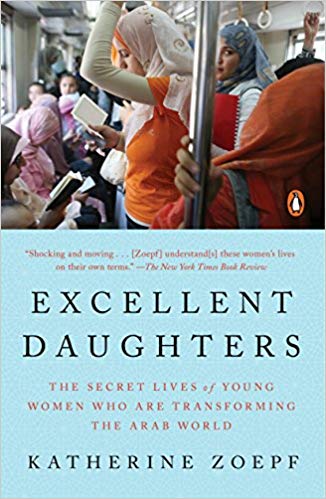 Excellent Daughters: The Secret Lives of Young Women Who are Transforming the Arab World

Title: Excellent Daughters: The Secret Lives of Young Women Who Are Transforming the Arab World

Excellent daughters is, according to its author, Katherine Zoepf, as non-fiction work. Zoepf was a journalist working in the Middle East for a number of publications over a period of several years. This gave her a track into places and conversations with girls and young women across a broad range of Middle Eastern countries that have informed this work. It saw her sit with groups of girls who had just finished schooling in their homes in Saudi, interview young women in the mosques in Syria (before the conflict there), answer questions from those upset by her writings about women in Lebanon, and much more. As such, this book provides a unique insight into the thinking of young women as they navigate their own, as well as their family’s and community’s expectations, cultural norms, and religious world.

The Middle East is demographically a young region. Zoepf speaks of close to two thirds of the population being under the age of 25. This makes her book an interesting and essential insight into the future of these nations and this region. Whereas studies have focussed on the impact of this demographic on education and employment, for example, her insights into the ways young women are navigating these changes are a useful addition to the material presently available.

Several changes that are happening for women are noted. More women that men now attend university in most Middle Easter countries. There is a small, but growing, group of young women who are not married early, and so are single; changes that are beginning to impact social structures.

Zoepf captures the inherent tensions that many young girls feel as they are educated, interact with the wider world, and yet seek to be true to their communities fundamental belief and behavioural systems. She wrestles with her expectations around 18 – 20 year olds of an emerging maturity and yet her observations of what she describes as a childishness, and suggests that many young women have ‘come of age in a sort of metaphorical walled garden’. In the story of a young Saudi woman who has just finished high school and had her marriage arranged, Zoepf tells of Nouf’s focus on wanting her marriage to occur at a Disney Castle. Zoepf was surprised at the intensity with which this Nouf focussed on Disney and this aspect of her wedding, and wondered if it represented the place where Nouf could try to express herself and this tension between maturity and how young she still was.

The author acknowledges that often she made the mistake of reading too much into girlish manners and elaborate demonstrations of modesty, recognising that these often masked ambition and maturity she does not always recognise.

A range of topic areas are explored in the book, including veiling, trends in religious education for young women (especially where state authorities are opposed to growing religious movements), shame and honour, morality and social customs, sex and virginity, the impact on young women of moving for work, social change and activism, and the cost of participating in social action.

Coverage of some of these topics has the feel at times of the journalistic story to have a story to sell. Many are areas of outsider interest in the exotic and unknown. At the same time, Zoepf handles this reality by acknowledging it her journalistic bias, and by letting the young women’s own stories provide the focal point for her examination of the issues.

This is the greatest contribution of the book, we hear the stories of young women, brought together into one place, in ways that are not otherwise available. And, it is done in an accessible way. Readers will find themselves drawn into the story of Samira, a young women who decided to participate in the demonstrations in Tahrir Square in Cairo, was arrested and subject to forced virginity testing. We are drawn into the story of Manal, another young Saudi woman who is negotiating the demands of her marriage being arranged, and the ways that will remove her from contact with her friends. Each chapter is focussed around the story, or sometimes stories, of young women in the everyday.

Zoepf faces the challenge of being a Westerner with a view of the power of change focussed on confronting issues head on. She notes, however, that change as she has seen it in the Middle East is often small and in the most unexpected of places, but still with far-reaching affects that she as an outsider struggles to grasp. She explains how powerful cultural constructs, like shame, can and are being used to fight for greater freedoms for women. The journey for change for women, at least at times, starts within culturally acceptable spaces.

Excellent Daughters adds to the work available on youth in the Middle East, and is of importance because it provides a window into the lives of girls and young women, and the way they are negotiating this new world from within their cultural framework.

Previous Post
Intimate Selving in Arab Families: Gender, Self, and Identity
Next Post
Women in God’s Mission. Accepting the Invitation to Serve and Lead.
Close