Feminist Edges of the Qu’ran 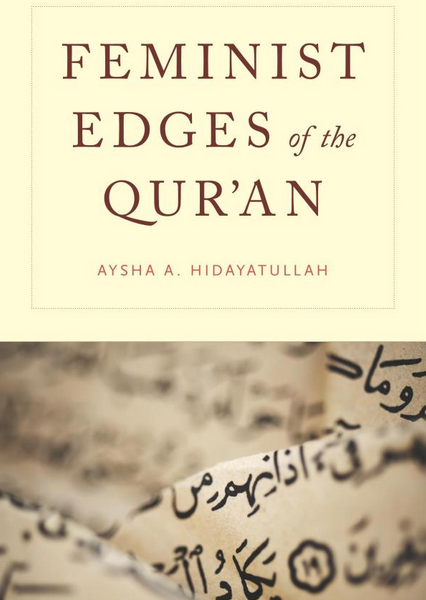 Feminist Edges of the Qu’ran

Feminist Edges of the Qur’an brings fresh reflections on the work of Muslim women’s reading of the Qur’an. Aysha Hidayatullah, Associate Professor of Islamic Studies at the University of San Francisco, acknowledges the influence of feminist women scholars on a gender-sensitive reading of the Qur’an, people like Amina Wadud, Leila Ahmad, Riffat Hassan, Asma Barlas, Fatima Mernissi and Azizah al-Hibri, to name a few. In her preface she describes the hope the work of these scholars brought for many Muslim women who felt alienated by the prevailing religious traditions and interpretations of Islam.

While Hidayatulah’s starting place is her discomfort with the interpretation of the Qur’an that these women expound, she spends a large portion of the book exploring her understanding of the tafsir (exegesis) of Wadud, Hassan, Barlas, and to some extent Mernissi. Hidayatullah’s thesis is that feminist exegetical techniques cannot be used to read and interpret the Qur’an, that the Qur’an has biases against woman unable to be overcome by such interpretative techniques.

Hidayatullah’s thesis is a bold and brave one. Women daring to call for a rereading of the Qur’an that challenges patriarchal biases has been a significant challenge to traditional Islam. For Hidayatullah to then challenge that work, while still self-identifying as a feminist Muslim woman, puts her at odds with both those who initially gave her hope in her religion, and with the religious hierarchy.

Muslim woman have long been held as the repositories of Islam’s most deeply held values, such that debates challenging those values associate feminism with imperial violence. Feminist interpretations of the Qur’an are often associated with Western ways of thinking that transgress Islamic tradition. This has resulted in a crisis of authority regarding tafsir. Religious authorities have fought hard to preserve their power in interpreting the Qur’an, so that Muslim feminists become marginalised in their exegetical work. However, at the same time, Hidayatullah’s work demonstrates that it is from the edges that the impetus for change within Islam has often come.

She focuses on three methods of feminist Interpretation of the Qur’an:
• Historical contextualisation method, where the historical circumstances of revelation in the Qur’an allows it to be read in the light of changing circumstances, and societies needing to understand the principles intended by the particulars of the Qur’an and learn to apply those principles to their present context
• Intratextual method which involves comparing related verses in the Qur’an rather than reading them in isolation, including reading verses within the overall movement within the Qur’an
• Tawhidic paradigm which is framed in the doctrine of the unity of God and his incomparability, disallowing a final interpretation of the Qur’an so that man does not set himself up as God.

Hidayatullah provides a comprehensive historical overview of feminist Qur’anic exegesis, as well as the roots of these methods in the works of male exegetes. However, throughout she provides no alternative to these readings. For someone who has not read much of the work of scholars like Wadud, Barlas, Hassan and Mernissi, this is a comprehensive engagement with their work and the ways they have affected a reinterpretation of many of the troublesome verses on women. Her work is to be commended for that. At the same time, application of her thesis here is largely absent.

It is clear that Hidayatullah is still wrestling with her discomfort with the work of the feminist interpreters, in part because she has viewed them as mentors in her journey. What is unclear is how her personal faith journey influences this discontent.

Her critique of her former mentors is based around the inconsistencies she finds in their arguments, such as both male and female difference, and male and female equality, in the Qur’an that she says cannot simply be argued away. She is uncomfortable with the failure of Wadud and others to take their arguments to their most far-reaching conclusions where, she argues, their interpretation often breaks down. Issues like gender justice, male and female roles influenced by biological difference, understandings of equality apart from Western, liberal definitions, all cause her to question feminism as an interpretative lens for the Qur’an. Here she relies heavily on the work of others, including Kecia Ali and Raja Rhouni.

Hidayatullah is daring enough to admit that in challenging the work of feminist scholars of tafsir a possible outcome is that scholars may find that the Qur’an does not support gender equality, at least in the way Western or Christian thought has been formative in shaping. She premises her argument here on an assertion that feminist tafsir has been hampered by methodological rigidity that has prevented it raising questions on some of its foundational premises. Since these women have been firstly committed to egalitarian views of equality, they are bound to read that back onto the Qur’an when the Qur’an may not affirm such a reading.

The conclusion that HIdayatullah reaches is that if the Qur’an does not support a gender-nuanced reading, then women like her will have to find new ways of relating to it as believing Muslim feminists. She says of herself that she is forced to embrace a position of ‘radical uncertainty’. This position, she acknowledges, may appear counter-productive for activists wrestling with the day-to-day issues for Muslim women negotiating the serious practical exigencies of daily life. She admits that her position can appear elitist because it is formed in academic isolation. Here Hidayatullah comes a full circle and argues that change cannot be made by reinforcing notions of equality in the text if that text does not support it.

This is a fascinating book that raises far more questions than it answers. In doing so it invites conversation, dialogue and searching. It was interesting to note that Hidayatullah’s journey began due to her study of Mariyah the Copt. Mariyah the Copt was one of the Prophet Muhammad’s female slaves, and Hidayatullah was disconcerted to learn that the Prophet Muhammad kept slaves. A lowly Christian woman, kept as a slave by the Prophet, has become the start of a journey that calls into question basic assumptions about the Qur’an. God does have a plan that is much bigger than our minds can imagine.

Hidayatullah’s study shows the influence of the work of Christian women theologians, scholars and academics on the framing of women’s identity and equality. Her readiness to acknowledge that the Qur’an may not actually say what those who aspire to see it as an inclusive religious text want means those engaged in mission must ask similar questions in their desire to use the Qur’an as a foundational bridge to the gospel. We cannot use the Qur’an to say things it does not say, reading back onto it what we want to be there. For women who seek to share their life journey with Muslim women, this book is a resource of questions that remain unanswered with regards to the Qur’an’s teaching on women. These are questions that should both influence our own desire to understand God and who he created women to be, as well as provide starters in conversation so that our journey is a shared one to discover our true identity in God.

I commend Aysha Hidayatullah’s courage to confront the questions that need to be answered so that women can find freedom that is based on truth.

Previous Post
Women in Mission. From the New Testament to Today
Next Post
Thinking biblically about Islam
Close