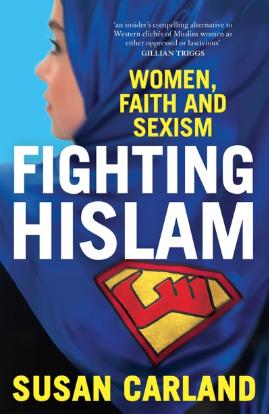 Fighting Hislam is, at the beginning, highly engaging. Carland’s description of her internal responses as she engages with a journalist who is quizzing her about her doctoral research is as funny as the actual conversation is depressing. Depressing because, as Carland notes, there is a common conviction among non-Muslims that it is a fact that “sexism against Muslim women is rife,” “the situation for Muslim women is dire,” and it is not possible that there are Muslim women and men who are challenging sexism from within their own communities. Furthermore, as evidenced by the conversations Carland has had, apparently non-Muslims feel no compunction in presenting their attitudes about this topic to her, “a clearly identifiable Muslim in a hijab.”

Fighting Hislam began as Carland’s doctoral project, born out of frustration with decades old biases, both Muslim and non-Muslim, against Muslim women. Carland, a lecturer and researcher at Monash University in Melbourne, Australia, wanted the voices of practising Muslim women who are trying to change Muslim attitudes towards sexism to be heard. She interviewed 23 women, some of whom, like Amina Wadud, are well-known outside Muslim circles. Eight of those 23 women are converts to Islam, and all live in either Australia or North America. Carland’s interviewees are educated, vocal, and have prominent jobs within society: they are theologians, writers, activists, and bloggers. She looks at the motivations of these women, considers their religious and ideological inspirations, and details the tensions and struggles they have experienced in their fight against sexism.

Aside from the key theme of feminism and Islam, and how women are coming to grips with what it means to be seen as a feminist while still being a Muslim, a couple of insights which particularly stood out to me were those to do with shame and legitimacy. Several of Carland’s participants described the pressure they received from other female Muslims to stop challenging sexist behaviours openly, because in airing the “dirty laundry” they are shaming the whole community. Not only have the individual women been criticised by other Muslims, one woman’s parents were also ostracised by their friends. Furthermore, particularly in Arab communities, a man’s honour can be affected by his wife’s behaviour, “So if the wife is too outspoken, that reflects on him… .” The concept of legitimacy is tied up with that of belonging—who is or is not seen a “proper” Muslim, and thus who does or does not have the right to challenge patriarchal beliefs and practices. Converts to Islam, and women who do not wear a hijab, felt particularly isolated and unsupported in their efforts. Women, such as Ayaan Hirsi Ali, who are not working from within Muslim communities and who are not seen as sincere, also lack legitimacy.

As strong as the beginning is, as the book continued I began to wonder who it has been written for. In choosing the interviewees she did, Carland is tapping in to a highly selective group of women whose work appears to have little relevance for Muslim women in a majority of communities around the world. It is not a scholarly work—there are no footnotes and no direct references to works cited, only a list of sources for each chapter. If a reader wanted to find out where Carland sourced some of her information (for example her assertions about what rights “classical Islamic law” affords women), they’d have to hunt through each work listed. Carland, and her interviewees, clearly want people to know that Islam is not inherently sexist, yet the broad generalised statements to this effect raise more questions than they answer. Carland’s statement, for example, that “whether a particular belief or practice is acceptable” depends on “whether or not it is legitimately ‘Islamic,’” left me wondering how such legitimacy is determined, particularly since there is no single “Islamic” identity that all Muslims subscribe to. Carland also contends that “there are limited sociological accounts of Muslim women who fight sexism from a faith-positive perspective,” and that her book aims to go some way towards addressing that gap. This assertion appears to overlook a large body of work about women in piety movements in countries such as China, Indonesia, Syria and Egypt. While she does acknowledge Muslim women who are dealing with sexism in Iran, she neglects to mention the well-known Sisters of Islam movement in Malaysia. These omissions add to the impression that the book is West-centric and not catering to a scholarly readership.

Furthermore, at times it feels as though Carland is trying hard to convince the reader that Muslim women are just like them and can be trusted/respected/liked. This can be seen in her descriptions of her interviewees, which are peppered with adjectives about their characters: “intelligent and outspoken,” “unflappable and erudite.” Carland herself says that she did not want her participants to be “mere demographical data” but rather for them to be seen as “real women living real lives.” While this may resonate well with readers who are perhaps suspicious of Islam, to me it comes across as unnecessarily subjective, awkward, and odd.

Fighting Hislam provides insights into how a minority group of practising Muslim women are challenging sexism and seeking to redress the gender imbalance in Islam in the West. Carland’s conclusion that her interviewees are part of “third-wave feminism,” in which women are more able to define their own “position on faith and women’s rights” for themselves, acknowledges that neither feminism nor Islam are static but are instead influenced by the evolving environments they are in.

It caused me to wonder how Christian women can support Muslim women like those interviewed by Carland, and how we can really listen to them and acknowledge that their faith can “play a significant role in the way they feel about and confront sexism.” After all, we also face similar challenges in negotiating our identities as women within our faith, and countering automatic assumptions that our religion is associated with the oppression of our rights. Sadly, it appears as though the women interviewed by Carland have found little support for their work among non-Muslims, and Carland does not acknowledge that there could be shared action in this area. Yet, as Cathy Hine details in her blog Women Leaders in Islam, there are Christian and Muslim women around the world who are working in partnership to address issues of mutual concern in their nations, such as domestic violence. While we must take care not to impose upon Muslim women our views about what needs to be changed within their communities, we can support and love them as they set the pace and scope for action. How can we become more proactive in our efforts to make connections with Muslim individuals and communities who are seeking to address issues that affect us all?

Previous Post
The Making of a Salafi Muslim Woman: Paths to Conversion
Next Post
Threading My Prayer Rug
Close