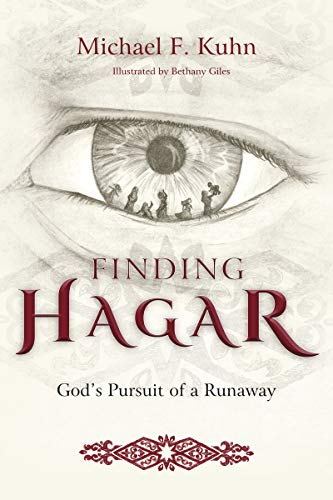 Title of Book: Finding Hagar: God’s Pursuit of a Runaway.

Finding Hagar is a beautiful and a wonderful little book. The beauty is not just because of the uncluttered and enticing layout of its 116 pages, but the way the combination of image, imaginative writing and careful explanation draws the reader to pay closer attention to detail in the text of the Bible.  It is wonderful because its author is a man who has ministered long in the Middle East and who, having experienced Scripture subverting his own prior understanding about God’s attitude to those outside of the Christian community, not least towards women in that context, has taken the time to help others consider afresh.   Kuhn admits that he ‘used to read quickly over the Hagar story, mostly to confirm my own suspicions …’, and ‘… had no doubt that her son Ishmael was destined to enmity and isolation.’ Now he invites readers to join him on a journey, pondering detail, so that we might recognise a different purpose within the Genesis material, and be persuaded that Hagar ‘confronts us with a God whose grace is scandalous, whose love is profligate, and who pursues the fugitive until he finds her.’

The chapters deal sequentially with the verses of Genesis 16 and then with related passages in Genesis and elsewhere in the Bible that touch on Hagar’s story.

All but the final two of the seventeen chapters have a similarly formatted entrée.  They begin with has a simple opening page with title, repeated patterned motif and the Bible verse(s) being considered in the chapter. This is followed by a single page drawing, by Kuhn’s daughter Bethany Giles, that highlights an aspect of the story picked up by the verse(s), and then, for most chapters, a page of imaginative writing in an italicised font that offers a way of seeing the unfolding events through the eyes of a character (usually Hagar, but Sarah is also given voice). A further two to three pages of each chapter are then given over to accessible explanation of specific detail.

Every element reflects sensitivity to cultural elements present in the text.  The explanatory text helps us understand the implications. Kuhn pays attention to the meaning of words (and echoes in Arabic where illuminating and of relevance), and also to the resonances between words and themes across Genesis.   He is competent and knowing as he facilitates attentiveness to implicit intent within the text. Thus, in the very opening chapter, in succinct, deft phrasing, he enables us to appreciate the ways in which Hagar experienced commodification: she likely had no say in being given handed over into servitude as part of reparation following Abram and Sarai’s sojourn in Egypt, and may even have lost any identity her family gave her as even her name points to her being ‘the’ stranger  (ha gar) in their midst. In his sensitivity to inferences in the text Kuhn highlights parallels with others (notably Joseph and Moses) who were slaves in Egypt, pressing us to evaluate whether the people of God behave any better towards the foreigner.  Reading with Kuhn caused me to notice that we never actually read of her master or mistress using Hagar’s name: the only person to call her in that intimate way is the angel of the Lord.

Perhaps the most significant contribution to those who read Scripture in order to have their attitudes and actions shaped by God’s Word is the reconsideration of the angel’s predictions about Hagar’s son Ishmael. Cultural and linguistic insights indicate that it is only out of our own ignorance that we might take him to be pre-programmed as a jack-ass. Citing supporting work, which enables us to dig further should we wish, Kuhn points out that the word for wild donkey (pere) used in Genesis 16:12 does not refer to a dumb beast of burden but a sturdy, sure-footed and free-moving nomadic animal, impossible to domesticate but admired for its fearless independence. Far from declaring a curse, the angel is assuring Hagar that her son will not be subjected to the servitude that has characterised her life.  Her progeny has a future and a hope.

Reading with Kuhn we are helped to unearth treasures embedded in Scripture which give dignity to peoples of the Middle East, and which anticipate the Good News that people of all tribes, tongues and nations are redeemed through Christ. My own exploration of Genesis has me feel Kuhn is more judgemental of Sarah than the text is leading us to be. Nevertheless I endorse the tone and the content of all the material in the book.  It makes rich pickings, for personal growth, for fuelling conversation around scriptures, and as a resource for preparation of our shared studies with Muslim sisters. Its concluding chapter and appendix pick up in different ways on contemporary concerns about Hagar, Ishmael and the Arabs, so that even if short the book is comprehensive in reach. I highly recommend it.

Carol M Walker has worked in South Asia, among students and on the staff of the Bible Correspondence School. She has also worked in the Middle East as the country team leader and then a wider support role for workers. She was also involved in encouraging learning for ministry among Muslims within her organisation. More recently she was working in preparing cross-cultural workers.