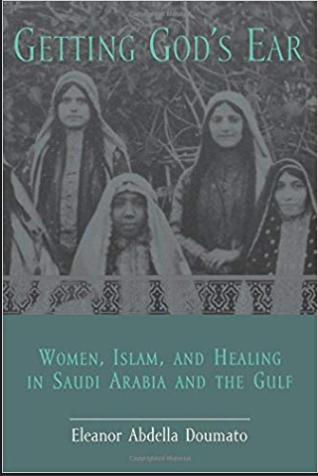 Title: Getting God’s Ear : Women, Islam, and Healing in Saudi Arabia and the Gulf

Whilst this book is, as its subtitle suggests, about “Women, Islam and Healing” it is also, at a deeper level, an examination of women’s spaces or, more specifically, the narrowing of public space for women with the advent of Wahhabism in the Nejd under the House of Saud.

Doumato, a secular American-based academic, writes from the perspective of one who has spent time observing the changes in society and life for women in the Kingdom of Saudi Arabia (KSA) since the late 1970s when she first moved there with her young family. She began the book as a way of making sense of the “persistence of women’s separation” (p. 1) in modern day KSA. She seeks to do this by looking back in history at the rise of the Wahhabi expression of Islam in the Nejd, from the mid-nineteenth to mid-twentieth century, and how the public space for women, and their ritual activities within them, has been shaped by this conservative expression of Islam. As her primary sources she makes extensive use of the documents from the Arabian Mission of the Reformed Church in America including excerpts from the mission newsletter along with letters, reports and personal correspondence held in archives. Quite a number of these writings were from women involved in the mission either as wives or medical staff themselves. In addition to this Doumato also uses narratives by a number of travel writers who made various travels through the area from the mid nineteenth century through to the early twenty century. Out of the eight travel writers only one of them was a women. These documents and narratives, whilst obviously observations from the ‘outside’ and also often a male view, provide a fascinating insight into aspects of life in the Nejd and the Gulf during this time period. Doumato focuses on two main areas – women’s access to religious learning, prayer and worship outside the mosque (such as vowing rituals held at shrines and the ‘celebration’ of mourning); and the use of words (both spoken, written and consumed), engagement of spirits (including dance sessions to appease possessing spirits) and traditional medicine for spiritual protection and healing. In doing so she describes practices and a way of life that has virtually disappeared from view in contemporary Gulf culture but can heighten understanding of the practices that do remain.

Unfortunately however, whilst this book is an invaluable resource as one of the few that describes popular practices for women in Islam in detail, the conclusions Doumato draws after an exhaustive trawl through her key historical sources ultimately left me unsatisfied. I read both the prologue and epilogue with interest in light of the changes for women in KSA that have taken place over the past year. The prologue describes the climate of KSA in the late 1970s/80s and the epilogue revisits KSA in the late 1990s. In both Doumato asks insightful questions and provides a number of hypotheses as to why it is that women have continued to experience marginalisation in modern KSA. The chapters in between however, whilst historically fascinating, do little to contribute to her conclusions beyond the simple, commonly understood outsider perspective. That is, that the culture in KSA is shaped by a mix of Wahhabi doctrine in a mutually supportive relationship with the state combined with tribal culture in a struggle to define itself within the complexities of the modern world with its access to education for all and ever-improving technologies. A reading of the many opinions and analyses of the current situation for women activists in the kingdom and the impact of MBS’s leadership that are available in mainstream English-language media provides similar information.

However, that is not to say that it’s not worth reading. I would recommend this book to those who have an interest in the history of American missions in the region as, whilst this is clearly not Doumato’s intent, by focusing on the women’s perspective she provides an alternative view to the male-dominated analysis of missionary activity. I would also recommend this book to those who are wanting insights into past cultural practices of women, of which may be heard but a whisper in the present day. Understanding what has happened in the past may give us fresh eyes to interpret what is happening in the present. This book could also be a tool to aid reflection on the place of women within Islam in the Gulf today. Perhaps in understanding how the space for ritual practice among women in the Gulf has shrunk we can then ask not why does separation persist, as the author does, but rather where are women now finding alternative means for gathering and community, how are women’s needs for spiritual protection and healing being met and how, as followers of Jesus, can we be a part of building new communities of healing among them.

Jo Bloggs has spent over 10 years living in the Arabian Gulf with her family. Having completed a degree in modern history and international relations, she has a deep interest in the history of the region and how that shapes and impacts life today. She enjoys sharing life, drinking tea and having deep conversations with women from many different nations in the melting pot that is modern Arabia.