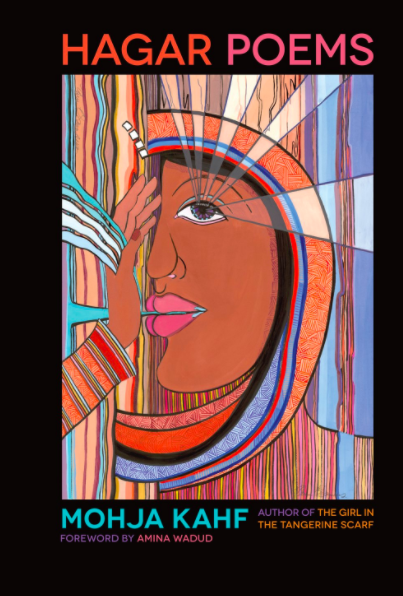 One of the things that makes poetry magical is the words that are left unsaid; the hints, the allusions, the lingering questions that make the reader stop and think. This negative-space of context and suggestion allows the reader to inhabit the poem with their own thoughts, queries, answers and wonderings. When done well, the reader feels a link between the author’s experience and their own, and yet senses the depth of emotion and history and thought that remain unsaid. In this way, poetry allows for the grey in a world we all-too-often pin into black-and-white prose.

It is this negative-space, these hints and allusions to deeper context and shared experience, that Mohja Kahf’s Hagar Poems uses to present a holistic look at the lived experience of at least one – and potentially millions – of Muslim women, in its sixty-five poems about women in the Muslim narrative. A Syrian-American poet who grew up in a devout Muslim household, she teaches and writes on comparative literature, feminism, cultural dissonance, and many other topics.  One of several books of poetry, Hagar Poems is written in chronological order of the subject, beginning with the world of Hagar. Readers may know this name in passing from Judeo-Christian accounts, but Kahf presents Hagar (or Hajar, as she is also called in several poems) as hugely significant in the Muslim narrative; the concubine and mother of patriarchs. These initial poems explore Hagar as ancient near-Eastern immigrant, mother, abandoned concubine:
“After the searing light
After abandonment
After the blow
that brings the head to the ground
and breaks the teeth
After the unrelenting vision
After the god who required blood and obedience,
how do you find water?”
(Excerpt from The Water of Hajar).

However other poems place Hajar as the sum of the modern migrating woman; arriving in America, marching in the AIDS rally, attending therapy, visiting Hot Springs in Arkansas with the author. To Kahf, she seems to be the beginning of heritage, the first stranger, the Cain of her people – rejected but protected. This finds explicit expression in the Hadith that Kahf quotes before her poem Hajar Triumphant – one of many Hadith and Quranic passages referenced and quoted in the book: “Islam began as a stranger and will return as a stranger.”
It is interesting to note that even when attributing this quote to Muhammad, Kahf does not add the honorific ‘PBUH’ or ‘Praise and blessings upon him’ that many Muslim authors use after Muhammad’s name. Her book is as much a challenge to Islam’s culture, patriarchy, and oppressive elements as it is an exploration of the women in its past:
“The mosque board members
examine the dogma ID card
of every supplicant at the door,
run morality background checks
on the impoverished and the ill.

In the desert, with the boy dying,
Hajar ran to the heights.

Faith acts
in her hands and feet.”
(Excerpt from Hajar at the AIDS March)

With their constant reference to Muslim canon and narrative, these poems use negative space to speak to the layers of diverse cultural, historical, and canonical context within which Muslims live. While the first problem with Western engagement with Islam may be that it often forgets to see or ask the experience of women, the second problem is that it frequently assumes a singular or flat experience for those women – effectively silencing them in its very assumption of their silence. Kahf’s poems challenge the reader to listen better. She explores the tensions between love and frustration, comfort and challenge, and speaks of an experience of many Muslim women who are, like women in many other religions, engaging with what it means to be a ‘modern Muslim woman’ with all its nuance.

The work explores the worlds of others beyond Hajar – Sarah is the narrator in several, as is Abraham, and Kahf explores manifold potential perspectives on the traditional narrative. In asking how a caseworker might view the dynamic between Abraham, Sarah and Hajar (The Caseworker Visits Abraham and Sarah), she asks how we today are to read ancient texts and narratives; whether our moral standards can be retroactively applied – a question many Christian women find themselves asking of the parallel Biblical account, and others. But the distance of history cannot untangle Kahf – or anyone – from their canonical narratives so easily. Kahf asks the key question in her poem Hajar Thorn: am I condoning this account? Does God?

“Hajar, you will be betrayed over and over
It is your story
and I am complicit in it.
….
Hajar, even if I fail again and again,
you have been my guide
through a merciless, burning day
My sister, my teacher, my friend,
whether near to me or estranged,
inextractable thorn in my flesh”

The book, of course, continues on far beyond Hajar – imagining the experiences of many other women in the Muslim chronology. Notable mentions include Pharaoh’s daughter, Asiya; Moses’ wife; Balqis the queen of Sheba; Zuleikha the wife of Potiphar (and later Joseph); Mary; Khadija; Fatima; Aisha, and more. These poignant poems point to the many examples of womanhood that Muslim women find in their own texts, and how those examples could be read. With sympathy and creativity, Kahf gives complexity to the frequently flattened tropes that women often play in literature, simultaneously challenging the popular misconception that Islam is only ever a religion about men. In her poems on Zuleikha, Kahf joins the ranks of other Muslim feminists in re-reading permission and grace for femininity and female sexuality into Muslim texts, although this (and most of the isogesis in the book) isn’t given much external support.

Kahf takes the idea of negative space to its extremity in her poems titled, respectively: What Is Recorded of the Response of Ghazali’s Wife on Being Informed by Her Husband the Great Theologian That He was Quitting His Job, Leaving Her and Their Children, and Skipping Town to Find God and the Proper Worship Thereof, and What al-Ghazali’s Mother Commented on the View of Her Son the Eminent Theologian that Women’s Nature’s Tend Not Toward Spiritual Heights but the Baser Elements of Worldly Life Such as Bearing and Nursing Children and the Muck of Cooking, Cleaning, and Sex for their Husbands and/or Masters. Both poem headings are followed by a blank page in place of a poem and the instructions for reading the poem: “Read title of poem; maintain silence for at least 45 seconds; thank your listeners.” In exploring the recorded words, potential words, and absence of words of women throughout the Islamic narrative, she asks the essential question: but what of the women? And her diverse answers allow for the diversity of the female Muslim experience, although only ever proclaiming her own. Regardless of whether you think Islam is a religion that cares for womankind, it has no lack of significant, strong, vocal women in its history.

The final section of the book explores some of her own particular questions and journeys with her faith; whether she is “lost to God because [she does not attend] the congregation at the appointed times” or whether God cannot be better found outside “the mosque, the synagogue, the church where we’ve locked God up for years. We repeat unto you: God is on the loose.” (Excerpts from Tortoise Prayer and Most Wanted). Her final piece, the poignant Little Mosque Poems, speaks to an experience of rejection of her questions and theological knowledge, and yet the commitment she maintains to her community and its religion: “My little mosque thinks the story I just narrated cannot possibly be true and a poet like me cannot possibly have studied Sahih al-Bukhari. My little mosque thinks a poem like this must be written by the Devil…. I love my little mosque, even though I can’t stand it”.

This work challenges the non-Muslim reader to question their own assumptions about the experience of women within Islam, and to reflect on potential parallels with the experience of women in Christianity and elsewhere. It creates space for the questions of Muslim women who are exploring and critiquing their paradigm in a modern context. In the end however, its strength is also its weakness: Kahf makes abundant room for lived experience but lands in a sort of cultural and religious universalism without any decisive critique of her (undefined) beliefs. Certainly, poetry as a genre does not lend itself to such a critique. This ambivalence could be because the implications of a hard critique are too great, or simply because a conclusion that rejects Islam is an answer to the wrong question – as Dr Amina Wadud says in her forward to the book, “… how do we face betrayal from all we hold sacred, dear, handy and inconvenient, without then betraying ourselves?” Kahf is not asking what she should believe; she is grappling what it means to ask her questions of Islam and yet still be a woman defined, in large part, by Islam.

Her prayer, however, speaks to the heart of women around the world who have been barred from encountering God in the name of their gender:
“I don’t dream of a perfect mosque, only
a few square inches of ground
that will welcome my forehead,
no questions asked.”
(Excerpt from My Little Mosque).

Born in Australia, Miriam Dale spent her developmental years in the Middle East before returning to Melbourne for tertiary study. She has since returned to the Middle East multiple times, including several months living and working with Syrian refugees. She is currently completing her Masters of Theological Studies through Melbourne School of Theology, with a focus on Islamic theology and human migrations. She holds a Bachelor of Theology from Ridley College. She works as a poet, writer, and educator, and has published two books of poetry: The Common Condition in 2012, and The Weight of Hope in 2018.