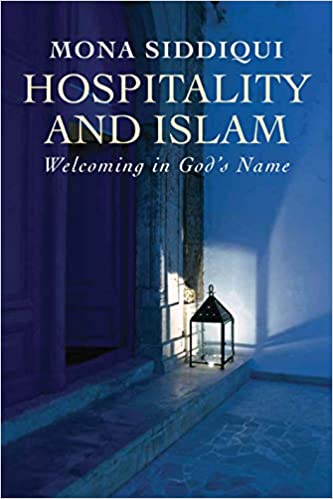 Mona Siddiqui introduces her book with the words ‘A generosity of spirit lies at the core of human hospitality, making hospitality the virtue which defines humanity itself.’ (p. 1) Drawing on a wide range of resources, including the philosophical, ethical and theological, that trace the historical and modern stories of hospitality, and acknowledging a greater presence of writing on hospitality in Christian theology, Siddiqui introduces us to Islamic understandings of the concept and its practices. She acknowledges that Christian theology has been an important influence on her thinking and ethical approach to hospitality.

In introducing us to hospitality in Islam, she writes: ‘Islam holds hospitality as a virtue that lies at the very basis of the Islamic ethical system, a concept rooted in the pre-Islamic Bedouin virtues of welcome and generosity in the harsh desert environment.’ (p 10) She positions hospitality as a ‘duty toward others’, suggesting that concepts of hospitality in the Qur’an are divine commands that humans should do for each other. The writings of Henri Nouwen give colour to her understanding of hospitality as a divine imperative, saying ‘when honoured and exercised as a divine imperative, it is about knowing that reaching out to others is an act of worship, thus challenging, humbling and spiritually transformative.

Indeed, Siddiqui’s work is rich for the conversation it carries out between philosophical, Christian theology and practice and Islamic teaching on hospitality. This is one of the books particular and unique contributions, opening the door for further conversations with friends and neighbours.

Personal insights ground Siddiqui’s work. The story of an early encounter with hospitality when she moved across cultures opened a window for the reader to glimpse the writer and feel her story through the book. She goes on to elucidate this further with reflections that place her journey front and centre: ‘I believe strongly that ‘doing hospitality’ is not simply about making physical room for others in our homes, but is essentially an attitude to life … Hospitality includes notions of forgiveness … at the very basis of hospitality is compassion, a compassion that shakes our complacency and leads us to think about more generous ways of being with one another.’ (p. 18) The book concludes with personal stories of hospitality received the impact of that.

As she leads the reader through a synthesis of Islamic teaching, using both the Qur’an and Hadith literature, as well as Islamic scholars, Siddiqui highlights a number of things. She notes that hospitality in Islam is not seen through motifs, such as the story shared with Christianity of Abraham hosting guests. Rather, Siddiqui suggests that any narrative on hospitality ‘must be teased out from the Qur’anic and Islamic literature which deals with the imperative to give one’s wealth, to give charity, to exercise generosity and to treat those who are vulnerable with compassion.’ (p. 21)

The reader must hold this understanding as they read because a chapter entitled ‘Men, Women and Relationships of Hospitality’ (Chapter 4) can appear somewhat forced in its inclusion in a book about hospitality. There are some questions for me about whether this chapter does fit the book, as its focus on gender relationships and violence seems to stretch much of the dynamic of hospitality discussed in the book. Perhaps it would have benefitted from greater clarity in teasing out the way hospitality is treating ‘those who are vulnerable with compassion.’

Her argument is that there needs to be more hospitable relationships between men and women, based on her premise that hospitality provides a framework for regulating relationships. She uses arguments that are built on prevailing theological debates in some sections on Islam around the nature and role of women, and the way social structures can or can’t be based on interpretations of the Qur’an on gender.

According to Siddiqui, generosity and hospitality are synonymous virtues in Islamic traditions. She argues that feeding guests and feeding the poor, often described in great details in those traditions, are virtues that demonstrate piety. Furthermore, she says that ‘The Qur’an and the Prophet’s Sunna (way of the Prophet) often align hospitality with charity’ (p. 31), making hospitality largely about the act of giving. She goes on to assert that relationships are recreated through the act of charity.

‘Relationships with neighbours are central to the theme of hospitable goodness in Islamic thought’ (p. 39), but there appear to be distinctions between near and far neighbours, with Siddiqui arguing that while neighbours and guests are often mentioned together, strangers cannot be considered the same. Relational connections create significant responsibilities, and the strength, or nearness, of those connections defines duties of hospitality.

Siddiqui also explores divine hospitality, stating that ‘In developing the relationship between the divine and the human, Muslims focused on God’s modes and purpose in revelation, the human obligation to submit to reading God’s presence in the Qur’an, and obeying God’s response to a revealed text.’ (p. 125-126) Sufi thinking and beliefs are used to inform her thinking here.

The contribution of this book to the conversation between different religious and philosophical understandings of hospitality is valuable. It invites further discussion and gives many hints for conversations that those who journey with Muslim friends will find helpful. I recommend this book for this reason of conversation.

CH has spent more than three decades in South Asia and the Middle East working in education, community development and the Church, was part of Interserve’s International Leadership for nine years, and has recently rejoined it. Her research has included women’s activism and social change in South Asia, violence against women, Islam and missiology. She is currently focussed on developing new streams of ministry among women who live under Islam and enabling women academics and practitioners to shape missiology and mission practice. She holds a PhD in Gender Studies (Australian National University).