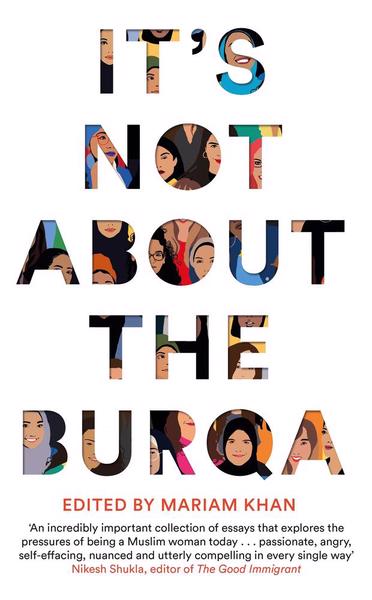 Title of Book: It’s not about the Burqa

This book answers the question: What does it really mean to be a Muslim in the West today?

Edited by Mariam Khan, a young British activist, the book showcases a collection of essays that explore the pressures of being a Muslim woman, navigating “the uncomfortable dichotomies our Muslim and western worlds have forced us into.” The voices of 17 Muslim women speak frankly on a range of topics which include hijab wearing, wavering faith, belonging, love and divorce, feminism, queer identity and sex.

Many writers speak robustly and are not afraid to call out the hypocrisy and duplicity in the structures and systems in both western and Islamic cultures. Mariam Khan writes of the contradictory relationship between the British government and Muslim women which at once seeks to support and police Muslim women’s lives. She concludes that the relationship “exists on the basis of our own voices remaining silent”. Afia Ahmed levels a stinging criticism of the fashion industry for lobbying Muslim women for representation whilst consistently failing to address the class, race and gender inequalities prevalent in society and from which Muslim women suffer disproportionately. She then goes on to berate her sisters for settling for too little and not using the representation gained to raise the profile of these issues and to effect change. Amna Saleem claims that shame is one of the biggest drivers of toxic masculinity within the South Asian culture and shows how women as well as men are implicated in continuing this “dangerous emotion” – to the detriment of the whole community. She urges that her community do better and suggests that “until we stop mollycoddling Muslim men there won’t be any substantial change”.

I found most moving the contribution by broadcaster, Saima Mir, telling the story of her experience of arranged marriage(s). In this very honest and personal account one gains greater insight into the impact on decision making and life choices which are made as a result of the interwoven-ness and complexities of the differing and sometimes conflicting strands which make up the life of a young, well-educated, British Asian, Muslim woman.

The contributors are in the majority British Asian, or from the Arab world. I would like to have seen a contributor from the Somali community in the UK (which is numerous), but perhaps lacks voice on the national/international stage. The single black Muslim contributor, Tanzanian born Rafia Rafiq, herself challenges the lack of visibility of the black African Muslim and gives several examples from personal experience which made her aware of the “anti-blackness in Muslim communities”.

The book offers additional, important and current insights to the field of Women’s Movements in Islam as it is unfolding across the world today.  We see the bold claim that “the current scholarship and material on Islam is not fit for purpose within the context of our modern lives” and a call for  a feminist reading of the Qur’an which would enable men and women to “navigate modernity and Islam together” .  Some have been moved to activism – lawyer Aina Khan, who, in 2014, set up the Register Our Marriage campaign to raise awareness of the injustice of the absence of rights for women on a religious only marriage; researcher Jemilla Hekmoun, an avid mental health advocate, and Mariam Khan, herself, who rejects White feminism and urges her Muslim sisters to identify exclusively with feminist intersectionality.

I found most challenging the repeated assertion by contributors that their faith has sustained them despite the cultural patriarchy which blights their lives. These women retain their love for Islam as their way of worship, practice and prayer. Their hope and their fight is for a feminine critique of their religion. They resist by refusing to conform to either the culture of the west or those cultures of heritage and would see no contradiction in declaring themselves as emancipated. It left me wondering how I would share the good news of Jesus with them when they, themselves, are “working out their own salvation” and in many ways, succeeding.

There is a helpful glossary at the beginning of the book for those new to or unfamiliar with either Islamic, Arabic or Urdu key words and phrases. The short biographies of contributors delineated at the end of the book enables the reader to both “site” the author and follow up interesting leads for further study or exploration.

It’s Not About the Burqa is at times funny, sometimes sad, often angry and always passionate. I found it so engaging and so pertinent to current conversations around identity, belonging, misogyny and lazy stereotyping that I devoured it in a day.

The catalyst for this book came when Mariam Khan read that David Cameron had linked the radicalization of Muslim men to the ‘traditional submissiveness’ of Muslim women (2016). She wondered why she was hearing about Muslim women from people who were neither Muslim, nor female – especially since she didn’t know a single Muslim woman who would describe herself that way.     I would highly recommend this book to any who are engaging with Muslim women in diaspora communities. Let’s read and listen well to what they really have to say.

Previous Post
Muslima Theology
Next Post
Covered Glory: The face of honour and shame in the Muslim World
Close