Joyful Witness in the Muslim World 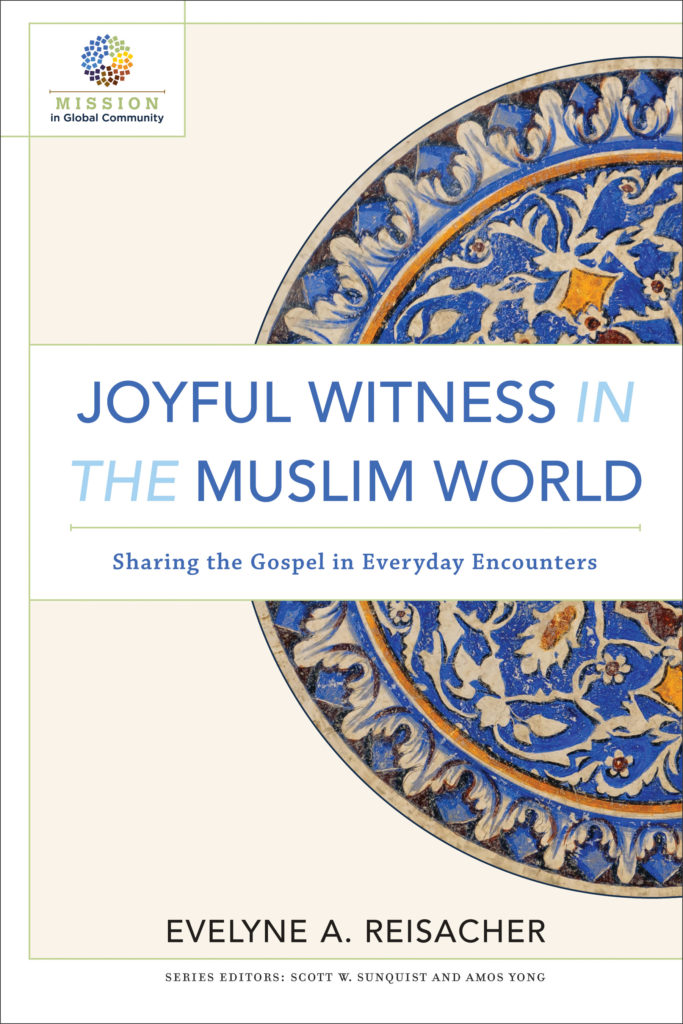 Joyful Witness in the Muslim World

“How can a missiologist like me not mention joy, when joy is so deeply imbedded in the biblical narrative and is so clearly at the heart of God and his love for the world? And having discovered this joy, how does one relate it to challenging, and even hopeless, contexts? This is exactly the goal of this book.”

Missiologist Evelyne A. Reisacher provides a refreshing and motivating perspective on Christian-Muslim relations. She ties the oft-neglected missiology of joy to ordinary encounters with Muslims in order to help Christians bear witness for Christ. Reisacher also integrates human attachment theory with mission and the joyful aspect of personal relations, showing how this research can potentially open up new ways for witnessing in the Muslim world. She invites her readers to join the journey of sharing the gospel with Muslim friends, colleagues or neighbours in connection with everyday realities: not viewing them with fear or as dehumanised ‘targets of mission’, but rather being motivated by hope and joy.

The book begins with an introduction to the theme of joyful witness, followed by a chapter on the relevance of human attachment research and the importance of mutual experiences of joy for healthy relational bonds – including those between Christian and Muslim adults. Reisacher then devotes a chapter each to several contexts in which she has experienced such joyful encounters: social media, art, earth care, caring for the needy, and urban life. Theological encounters are also addressed as a form of human relation, as indeed Jesus’ message about God was not detached from his listeners’ daily realities. Reisacher deliberately discusses this context last, pointing out that while conversations around doctrine are important for Christian witness, Muslims are first encountered as neighbours, towards whom Christians radiate God’s joy. Reisacher’s hope is that readers will be enthused to discover and explore further contexts for joyful witness; her positive and creative example indeed has this effect.

The introductory discussion on a missiology of joy is enlightening. Reisacher makes the salient observation that joy is a fundamental characteristic of the Triune God: the Father and Son rejoice in each other, in communion with the Spirit; this joy irradiates creation and is seen throughout Jesus’ life, even in the midst of his suffering (Hebrews 12:2). When Trinitarian doctrine is denied, the result is a God without joy. Furthermore, if the joyful news of the resurrection is true, it simply cannot be kept secret, mission is driven by the joy received from above. Reisacher is careful to point out that this joy does not preclude suffering; indeed, the two experiences are often intertwined.

Reisacher acknowledges that many questions remain to be addressed, and expresses her hope that others will continue to research the topics raised. Indeed, there are several ideas that I would be keen to see explored further. For example, the antithetical relationship between joy and shame, seen in studies of developmental psychology, is fascinating. I wonder how this could further shape the way we understand and share the gospel in terms of shame and honour. Similarly, the concept of fear being turned to joy through having a ‘secure base’ could be explored in relation to union with Christ. Another contribution that Reisacher makes to missiology that warrants further consideration is how reciprocity and mutual attachment in cross-cultural relationships can help where contextualisation is limited: whilst the latter is concerned with preventing relational rupture, attachment bonds are important for repair.

Reisacher raises several controversial topics of missiology, and although it is not the purpose of the book to expound these, she skilfully wrestles with some of the tensions. Her discussion of form and meaning and the emotional impact of interfaith music and art, for example, raises complex and unresolved questions. Another example is the place of environmental and social action in mission and the scope for interfaith collaboration. Reisacher emphasises the necessity and centrality of gospel proclamation, and the salvific gospel message as the means of any social transformation: through restoration of broken relationships between God, humanity, and all of creation. She also sanctions liberation theology’s assertion that caring for the needy and the earth are integral to mission itself. Reisacher maintains that Muslims and Christians can, and should, work together to care for the needy and the environment, despite acknowledging that restoration can only occur through the redemptive work of God in Christ.

Whilst I enthusiastically endorse this work, I do not concur unreservedly at every point. I question the notion that social and environmental liberation is integral to our mission task in this age, rather than a necessary outworking of godly living, but I think my main hesitation is the possible danger of a pendulum-swing. In the book, the gospel is defined almost exclusively as a message of joy, without mention that it also carries inherent warning (c.f. Mark 16:15-16). Sin and judgment are rarely mentioned. Reisacher rightly points out that if Muslims don’t join God’s ‘banquet table’ they will not experience “the fullness of what the Triune God has offered to humanity”; I would argue, however, that the consequences of refusing salvation are more serious than this. Elsewhere, Reisacher refers to Muslims as “people deserving the joy of God”; a description that I don’t think applies to any person (c.f. Ephesians 2:1-9).

Evelyne A. Reisacher is associate professor of Islamic studies and intercultural relations at Fuller Theological Seminary. She has lived and worked amongst Muslims in France, North Africa and the Middle East, with whom she has experienced countless moments of joy. Joyful Witness in the Muslim World is a contribution to the ‘Mission in Global Community’ series, a ‘global conversation’ that is designed to reach college students and all who are interested in responsible mission involvement. Reisacher writes with both novices and experts in mind, assuming no prior knowledge of Islam whilst also drawing from and building upon the work of other scholars across a broad theological spectrum. Each chapter also includes others’ testimonies of joyful encounters. The book feels both academic and personal, as Reisacher applies theory, theology and her own experiences at a practical, ‘grassroots’ level. I recommend the work for any Christian, particularly women, involved in witness amongst Muslims. May we be spurred on by the infectious joy found in our Triune God.

Reviewer:
Anny Cahill is from Perth, Western Australia. She is currently preparing to move to the Middle East to learn from and form friendships with women and families. After graduating from veterinary science in 2006, she worked as a vet for four years before beginning ministry and theological training. She completed a Masters of Divinity in 2015, and has had a growing interest in engaging with Islam and Christian witness within the Muslim world. She enjoys conversations over coffee, theatre (both stage and surgical kinds), word-play and jogging.