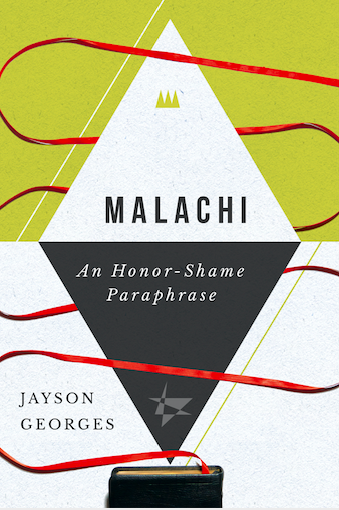 Malachi is the fifth book or section of Scripture to be paraphrased by Jayson Georges as he seeks to help the Church and Christians engaged cross-culturally understand the worldview dynamics of honour and shame. Through the honour-shame network (http://honorshame.com), Georges and his colleagues have been helping bring attention to social relationships organised through honour and shame. Their work has added a great deal of understanding to cross-cultural ministry.

In bringing this series of paraphrases into the public arena, Georges goes a step further and focusses attention on hitherto largely neglected dynamics within the Biblical narrative. His previous paraphrases (reviewed by When Women Speak) on Psalms, Esther, 1 Peter and James, have helpfully unlocked language and thinking patterns born within relationally connected societies.

Malachi is an interesting book to follow on from those previously paraphrased. It is intriguing to try to understand what lies behind the choices Georges makes regarding which book he will paraphrase next. Where Malachi fits in the sequence of what he is doing remains something of a mystery.

At the same time, it is a book that lends itself to classical renderings of honour-shame worldview and language. The paraphrase here highlights this with the use of language of praise and honour to God, drawing our attention to the nature of who God is and the honour due to him. Georges uses the title ‘Yahweh the Sovereign’ throughout, speaks of Yahweh’s glory, talks of him as the great King, and his glorious name. These, and many more aspects, paint a picture of God exalted and worthy of behaviour and offerings that honour God.

The sins of the people are spoken of in terms of dishonouring God through offerings that are diseased, infidelity in relationships, and a lack of generosity in giving back to God what is rightfully his. The language of shame is well-captured here, and shifts the attention of the reader to the deeply relational aspect of knowing and being faithful to God. This is a helpful reframing of sin as broken covenant relationship.

Included in this paraphrase is something of the links between purity/pollution and shame/honour, and in his introduction to the paraphrase Georges includes a section on purity and defilement. He notes: ‘God created everything in a certain way, and it should remain that way. When someone or something got out of place, it was avoided as dirty, polluted, profane, and unclean.’ (p. 7) He speaks of purity shaping not just ceremonial regulations but also social morality. It is here that I think he misses some of the deeper implications of purity-pollution and their relationship to shame-honour.

There is a deeply gendered note to purity and pollution and therefore shame and honour. Reading the laws and regulations governing the community we should not fail to notice the impact, both open and implicit, for women and the outworking of that with the community so that social morality also carries with it deeply gendered overtones. The paraphrase of Malachi, with a theme on purity and defilement would be enriched by a recognition of the burden of gendered nature of these. It is there within the text but too easily overlooked.

While noting this gap, I would recommend this paraphrase as Jayson Georges helps us wrestle with the relational impact of defilement and dishonour.

Previous Post
Men and Women in the Qur’an
Next Post
Walking Together on the Jesus Road: Discipling in Intercultural Contexts