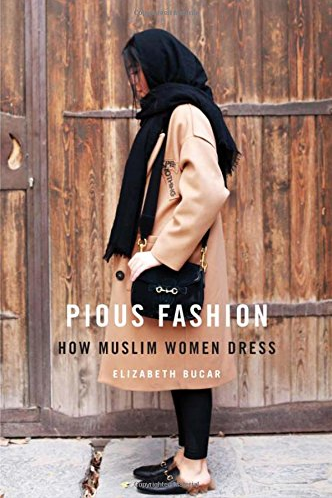 Pious Fashion: how Muslim women dress is an engaging and well-written work, offering many interesting and noteworthy insights. The author, Elizabeth Bucar, is Associate Professor of Philosophy and Religion at Northeastern University, Boston.

The book is notable for many reasons. It compares and contrasts pious fashion in three diverse and less well-known contexts: Tehran, Yogyakarta, and Istanbul. As Bucar herself notes, this type of comparative study is uncommon, as most scholars focus their attention on one particular country or region. Through her study, Bucar demolishes any presuppositions in the reader’s mind that Muslim clothing is homogenous or stereotypical. She shows that Muslim fashion reflects a diversity of aesthetic and moral values, and that exploring local context is essential if we want to understand “the profound political and religious implications that pious fashion has for Muslim communities.”

It provides relevant historical and political background and demonstrates how that has shaped the pious fashion worn in each setting. It was particularly interesting to read the unintended effects of Turkey’s ban on headscarves in the public arena, particularly on university campuses (enacted in 1981 and lifted in 2010). While it was “implemented to make Turkey more secular,” it had the opposite effect of politicising young Muslim women who were determined to fight for their right to wear the headscarf. It also increased tension between these women—who had to choose between wearing the headscarf and pursuing a higher education—and their families—for whom university education brings honour, status, and upward mobility.

It is ethnographic. Bucar spends time observing, and even participating in, sartorial practices, as well as interviewing women (between the ages of 18­–30) and reading fashion magazines and blogs. Her research was conducted between 2004 and 2013, and because she completed fieldwork in both Tehran and Istanbul more than once, she was also able to identify shifts in fashion in those locations.

The ‘Further Reading’ section at the back of the book is arranged according to the chapters and topics covered in the book, and Bucar’s introductory comments about each reference make this section more useful and accessible than a traditional bibliography.

Bucar carefully defines what she means by ‘pious fashion,’ explaining why she uses the term and emphasising that it includes all items of a woman’s dress—”tunics, pants, shoes, and accessories” and not simply the head-covering. She demonstrates that what a woman wears is both an individual choice and is shaped by her specific social context (which limits her choices). Generalisations are avoided: Bucar acknowledges, for example, that in Tehran fashion norms vary “by neighborhood,” within work or study contexts (different workplaces or university campuses have different dress codes), and from region to region within Iran.

Each chapter in the book is divided into two main sections. The first sections focus on what Bucar terms “style snapshots,” where she describes what the season’s trends are. Bucar also includes numerous photos, taken by local photographers, which provide a visual narrative of styles and trends. The second sections describe the forces and authorities (“including people, institutions, and ideologies”) that shape and dictate what is appropriate attire in that locale. Local terms (hijab – Iran, jilbab – Indonesia, tesettür – Turkey) are helpfully used for Muslim women’s required dress, and Bucar makes it clear that these terms refer to entire outfits, not simply the head-coverings, something I was previously unaware of.

A woman’s identity (self, national, Muslim) is tied up with what she wears. What is considered beautiful, modest, cosmopolitan, conforming, feminine… differs between locations. I found it fascinating that Bucar’s informants were keenly aware of what constitutes a ‘fashion failure’ in each context, and yet she, as an outsider, did not initially know how to discern such ‘failures.’ ‘Fashion failures’ occur either for moral or aesthetic reasons—they are either “impious fashion or unfashionable piety”—and are “defined by local cultures of style.” Since, even in Iran, there is no exact ‘handbook’ about what “proper” dress should entail, women learn by observing each other, by asking each other’s advice, by consulting local ‘experts’ such as fashion bloggers and women’s magazines, and, in the case of Tehran, by internalising the government’s legal dress requirements.

I highly recommend reading Pious Fashion then engaging in conversations with Muslim friends about fashion in their contexts. As someone who is generally uninterested in fashion, this book has challenged me to look more closely at what Muslim women are wearing, to ask questions, and to seek to understand the complex reasons for women’s sartorial practices and how fashion contributes to a Muslim woman’s self­- and public identity. Piety is not “just about obedience to orthodox interpretations of sacred texts: it also incorporates good taste, personal style, and physical attractiveness.”