Recovering the Female Voice in Scripture: Women and Silence 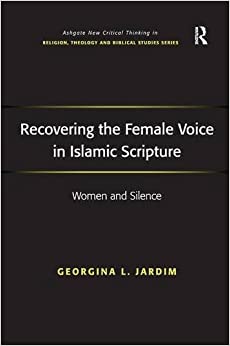 Recovering the Female Voice in Scripture: Women and Silence

Title of Book: Recovering the Female Voice in Scripture: Women and Silence

If you are serious about gaining an informed understanding of the Qur’an’s treatment of women then the effort invested in reading Georgina Jardim’s published thesis will reap rich rewards. You may be surprised by the pathway you are taken on, and where it leads, but the conversations you will have been party to on the way will furnish you with important insights as you make conclusions on the subject.

As a quality academic work Recovering the Female Voice in Scripture: Women and Silence surveys, and affords a knowing guide to, significant related literature: Jardim provides a comprehensive, well selected review of historical and traditional perspectives on women in the Qur’an, and critical analyses of significant contemporary works. But, as the title suggests, she does more. The core criteria guiding her consideration is commitment to identifying what the Qur’an is saying. Or, in her own words, she is seeking a ‘Qur’anic Hermeneutic for Gendered Reading.’ To accomplish this she systematically identifies the voices of other interpretive stakeholders in order to gradually fine tune attention on to salient detail. Attentive readers are provided with a route which will help them distinguish pertinent issues from the confusing babble of oft repeated opinions. From her distillation Jardim goes on to make her case for concluding that in the scriptures of Jews, Christians and Muslims, ‘women are not silent … their voices are formative, not only of female subjectivity, but of communal identity.’ (p219) That is, by being attentive to text rather than traditions, we will find that women are shown to be endorsed, active agents involved in establishing the theology presented in both the Bible and the Qur’an.

From the beginning Jardim makes clear she is writing as a ‘Scriptural Reasoner’ who is ‘being self-critical and deeply rooted in (her) commitment to (her) own particular faith in search of a common language with which to understand and engage with difference.’ (p4) To that end she properly gives attention to such issues as feminism and post-colonial theorising (interacting with Schussler-Fiorenza), to understanding how the traditional paradigmatic qur’anic woman was constructed (taking account of works by Leila Ahmed, Mawdudi, Qutb and others),to perspectives arising from Islamic feminist studies (in particular, evaluating proposals of Barlas and Wadud), to recent insights from a narratological approach to the Qur’an (drawing especially on the work of Neuwirth) and to the wider sphere of feminist literary approaches (thus interaction with the work of, eg., Mieke Bal). This process develops into consideration of the topic of voice, beginning with examining ayat as sign (by way of sifting work by Wansborough, Robinson, Watt & Bell, and Schimmel, and finding clues of how to proceed courtesy of Koshul’s typology of sign, alongside insights from Murato and from Cragg). It leads on to a consideration of Surah titles, and to the recognition that ‘Titles localize Qur’anic theology in relation to signs.’ (p142) So, following further careful logical steps Surah 58, The Mujādilah (The Female Disputant) is considered in detail. Despite some contrary traditional interpretations, the surah is found to ‘present a sign of prophetic criticism of androcentric worldview’ as the woman is ’affirmed as a shaper of divine speech.’ (p205). Upon reflection Jardim recognises commonality with Numbers 27:1-11 (Zelophehad’s daughters) and Mark 7:24-30 (the Syrophoenician woman), as each text demonstrates Abrahamic revelation ‘imagining new forms of theological justice’ by means of bold questioning by women. (p216) Jardim’s chapter titles show the development of her argument:

The thrust of Jardim’s argument is compelling. To reach a well-substantiated conclusion on the basis of such depth and rigour has required her to master a diverse range of challenging disciplines including contemporary sophisticated arguments in the field of literary studies, intricate distinctions made in traditional Islamic balagha, and qur’anic Arabic. She has done a brilliant job. There are, nevertheless, two matters for which I wish she had cast her background research net more widely.

I was sorry for the uncritical acceptance of the assumption that Genesis 3 and Christian interpretation are responsible for creating the image of Eve, and womanhood, as inherently warped echoed in hadiths. Evidence actually indicates that the milieu in which the pejorative hadiths emerged was swirling with androcentric Aristotelian ideas alongside some negative and some jesting Jewish writings. For Jardim’s research this is not a central issue. I would have been happier, though, with some different turns of phrase to leave the subject open.

The other matter which has the potential to distract from her argument is Jardim’s decision to redefine ‘chronological’ reading of the Qur’an as reading the surahs in reverse order. Justification for creating this premise lacks substance in contrast to the thoroughness applied to pretty much every other element of the discussion. The method is taken up in order to rebut tradition-based interpretation of Surattul Mujādilah and to challenge McAuliffe’s arguments which are based on ‘linear’ reading. Actually, this venture into thinly supported proposals on chronology was an unnecessary excursus. Jardim’s examination of terms for disputing, quarrelling and arguing across the Qur’an is convincing without it. It also reveals unfamiliarity with aspects of evidence-based work on chronology and thematic developments emerging, even as she was working on her thesis, from Neuwirth’s circle (see Neuwirth, Sinai and Marx (eds.), The Qur’an in Context: Historical and Literary Investigations into the Qur’anic Milieu, Brill, 2010). The implications for Jardim’s main conclusions are minimal, though some secondary claims in Chapter 7 should be re-evaluated: her leading insights on qur’anic affirmation of female agency and of The Mujādilah as role model are unaffected.

The work is technical and some language highbrow, so I do hope that our sister will be producing a distilled version for wider readership. Meantime we should be grateful to her for investing herself in producing this outstanding, timely resource.

Carol M Walker has worked in South Asia, among students and on the staff of the Bible Correspondence School. She has also worked in the Middle East as the country team leader and then a wider support role for workers. She was also involved in encouraging learning for ministry among Muslims within her organisation. More recently she was working in preparing cross-cultural workers.