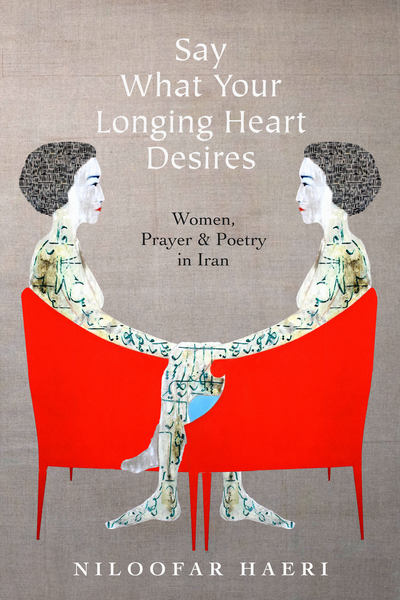 Title of Book: Say What Your Longing Heart Desires: Women, Prayer and Poetry in Iran

How do women seeking to be true followers of Islam pray? What do their prayers show about their relationship with God? Say what your longing heart desires opens the window through which we catch a glimpse of the heart of women in faith practice.

Say what your longing heart desires is an ethnographic study conducted over nearly a decade among a group of women in Iran. The majority of these women were born in the 1940’s, and so seem to have reached that stage of life where they could give more time to religious practice. While they were now in a position to spend more time in these practices it was shown that they had been developing these over a longer period of time, with work situations often being a place of shared experiences stimulating religious development. Women’s gatherings become a place of sharing experience, learning and practice.

Niloofar Haeri is an Iranian, living in the United States, and an anthropologist. The book was born out of a conversation with a relative during a visit to Tehran that challenged her assumptions about religious practice. She describes how her relative returned after performing her ritual evening prayers with a smile on her face. ‘She told me her prayers that evening had “gone well” and that she had managed to feel close to God.’ (Loc 62) This raised questions for Haeri about what it meant for ritual prayers to go well or badly, and this study was born.

In post-revolution Iran, we learn that many, in particular women, have gone beyond the rituals of religion to seek answers for their heart longings. The study highlights the tension that exists between those who see religion as performance, and those who live it as experience. Whereas the state has mandated religious practices, and made that a mark of identity, these women show that connecting with God and experiential relationship are more important for them than outward practice. In fact many of them reject practice that lacks the integrity of connection.

The book provides detailed insights into the relationship between prayer and poetry. Haeri highlights the exquisite beauty of language and how the music of that becomes a gateway for women in prayers. We learn of the use of prayer books, many filled with the poetry of the mystics, that provide words with which women can give expression to their hearts’ desires and longings.

While namaz is an important part of religious practice, this study reminds us that for many Muslims it is more than performance. Haeri argues from her study that ritual is the ‘site of love,, devotion fear, commitment, doubt, discovery, practice, routine and “repetition” … an occasion for the play of imagination and a great deal of reflection.’ (Loc1992). However, it is ‘do’a’ she says that ‘allows one not to search for rules and etiquette and to say what one’s “longing heart desires”’. (Loc 2008)

‘Do’a’ is experienced as joy; as an opportunity to give expression to life’s difficulties, challenges and pain; as encountering the kindness of God. ‘Do’a’ is seen as having no hard and fast boundaries. It may reflect the state of maturity of the relationship with God. Death of loved ones in particular seems to be a place for questioning and connecting with God.

There are different forms of poetry, which Haeri gives extensive insight into, that help women in these prayers. Some are verses from the Qur’an, others have been written by Imams and mystics. Women have memorised many of these, often being taught them as children by their mothers and grandmothers in particular, but sometimes fathers and grandfathers.

There has been an explosion of publications of these prayers. There are new prayer books written by religious authorities, like ‘Keys to the New’ and ‘Keys to Life’. Books like these seek to address everyday issues and appeal to a new generation with headings such as ‘Dealing with Oneself’, and ‘Human Beings deal with the Environment’. Haeri also documents how a new generation of laypeople are authoring books categorised as prayer books such as ‘Tea with a Taste of God’.

‘Say what your longing heart desires’ is a context specific ethnographic study. It looks at women in post-revolution Iran who are Shi’ite and of a particular generation. This does not diminish its value for those who live alongside Muslim sisters around our globe. The book challenges perceptions of ritual and relationship, of women and God under Islam. It invites us to pursue conversations that may give insight into relationship as a core of religious practice for some of these women.

Haeri’s work adds to the small number of books that help us move beyond orthodox interpretations of religious practice. It is particularly rich for the space it creates for all of us to explore women’s religious practices afresh.

C. Hine has spent more than three decades in South Asia and the Middle East working in education, community development and the Church, and was part of Interserve’s International Leadership for nine years, and has recently rejoined it. Her research has included women’s activism and social change in South Asia, violence against women and missiology. She is currently focussed on developing new streams of ministry among women who live under Islam and enabling women academics and practitioners to shape missiology and mission practice. She holds a PhD in Gender Studies (Australian National University).

Previous Post
Standing Alone: An American Woman’s Struggle for the Soul of Islam
Next Post
Terrains of Exchange
Close