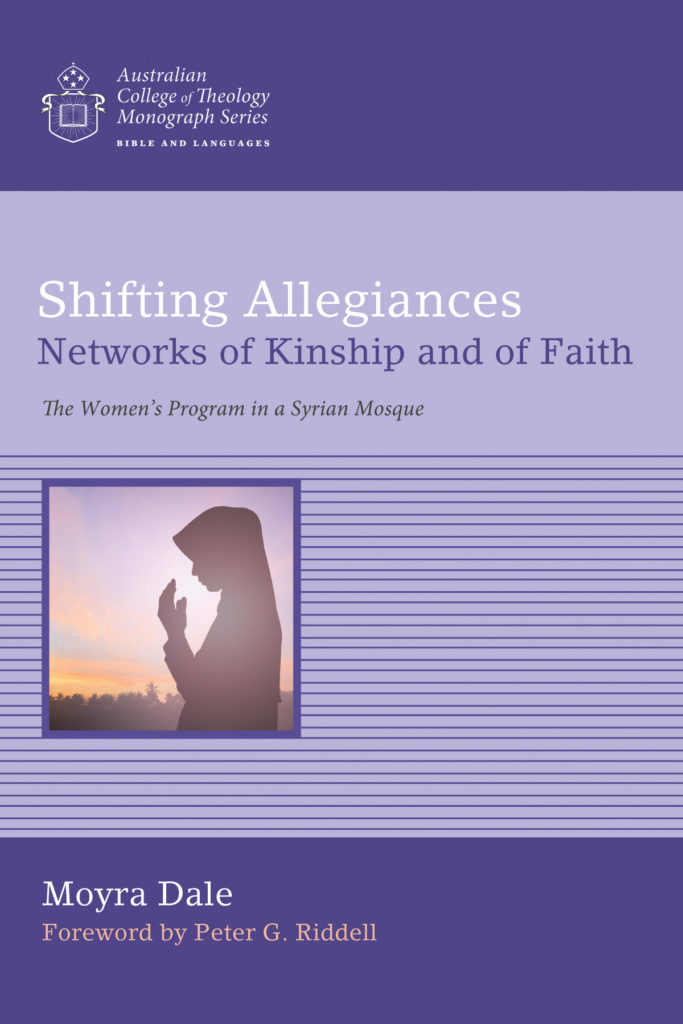 Title        Shifting Allegiances – Networks of Kinship and of Faith

Oppressed, housebound and unaware are widely held views of Muslim women. In Shifting Allegiances – Networks of Kinship and of Faith Dr Moyra Dale exposes the changing identity of the Muslim woman as an emerging allegiance to her community of faith competes with her traditional allegiance to home and family.

This book is an ethnographic study of the women’s mosque movement in Syria – in particular in the Garden Mosque under the leadership of Anisah Huda prior to the outbreak of war in that country. While an ethnographic study is always a snapshot of a particular time in life’s ever-changing pattern, the change in context from peace to war does not diminish the value of this study as a poignant and insightful examination of the developing practices of Muslim women in this changing world.

Dr Dale spent 3 years attending classes for women in Anisah Huda’s home and in the Garden Mosque in Damascus, Syria 2005 -2007. Her research is based on conversations, interviews, observation and document analysis. Dr Dale has sought to use participants’ actual words and has had her notes checked by one of the mosque leaders to ensure that this work represents actual practice rather than the understanding of an external observer.

This study is a unique picture of da’wa (call to true Islam) and the work of a da’iyah (Islamic teacher or missionary) that outsiders rarely witness. The observations and conclusions drawn from this study are consistent with those from other mosques in the Muslim world and so give all who work among Muslim women insights into the changing attitudes and practices of Muslim women throughout the world.

The women’s mosque movement is one aspect of growing worldwide Islamism. For women who attend the mosque programme their understanding of God, community, life and faith is shaped within their allegiance to the mosque community rather than within their families and communities of origin. Dr Dale shows how the new community of allegiance is a fulfilment of what has been rather than a contradiction to it. The activities of the mosque movement are performed in parallel to traditional expectations, for example, a woman’s role in the family, or her submission to text and sheikhs.

‘The woman’s primary role is mother and nurturer of family (and thereby the extended community of ummah)’ p74.

Once family duties are completed the woman is responsible for the completion of her religious duties.

With great clarity, Dr Dale has ordered her observations into five conditions that promote this expanding movement.

Dr Dale has described the intricacies and priorities of such a movement in a way that provokes the reader to examine her own networks within the Muslim community afresh.

Dr Dale comments on the reasons for such developments among Muslim women, namely the need for spiritual empowerment in their daily life tasks and accessibility to traditional means of blessings (e.g. recitation of Qurán) which were previously closed to them. Together with traditional family roles women are now “accessing moral and religious authority for their actions and also the power of blessing for the needs of the everyday life roles.” P207

This leaves the reader with the question … if these are the contemporary Muslim woman’s needs, how can we communicate to her the true source of empowerment and blessing for this life and the next?

This is a book for all who love and serve Muslim women. While written in an academic style, the narrative and descriptive observations ensure these insights are accessible to all. It gives a unique picture of the developing spiritual world and thought world of Muslim women which must not remain in the province of academia alone but be the basis for authentic practice where we truly connect and communicate with our Muslim friends.

Margaret P lives and works in a predominantly Muslim neighbourhood in Australia.