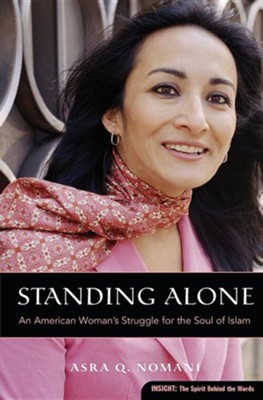 Standing Alone: An American Woman’s Struggle for the Soul of Islam, by Asra Q. Nomani.

This is not a new book: but it’s one that is well worth reading. It is an autobiographical account by a young American woman. She talks about her childhood and early career as a journalist, her struggle to find her identity as a person, and particularly as a woman growing up in the US within the cultural constraints of an Indian Muslim family. As part of that, she explores the writings and traditions of other religions, and then makes the pilgrimage to Mecca with her family, to understand her own tradition more deeply.

This is a fascinating part of the book, as she chronicles what she sees around her, mingling descriptions of circumnavigating the Ka‘aba, and other Hajj rituals, with the sights of local vendors, American food chain stores and glitzy shopping malls. They go in comfort, staying in a nice hotel: but she also describes the conditions of less wealthy pilgrims. Saudi Arabia requires that a woman make the pilgrimage with her male guardian. So Nomani goes with her extended family, including her baby son (she is a single mother), her father and mother, and they also take their niece and nephew (eleven and nine years). This gives the rich inclusion of different attitudes on the part of those doing the pilgrimage: her devout father and more pragmatic mother, and Nomani’s own attitude of often sceptical enquiry, together with the reactions of her niece and nephew to what they see. This frank insider’s description of her experience of what is so significant a ritual for Muslims around the world, and so inaccessible to non-Muslims, in itself makes the book worth reading.

Nomani combines her own reflections on her life and experience, with accounts of the Islamic traditions and people historically associated with Mecca and the pilgrimage rituals, particularly the women, including realising that ‘Khadijah could never have lived [and worked] in modern-day Saudi Arabia,’ where women are not allowed to run businesses in their own names (87). As her nephew refuses to go into the mosque at Medina when his sister is not allowed to, Nomani becomes conscious that ‘Muslim men… have the choice to accept the entitlements that they receive by virtue of their gender, but men have the choice to reject those privileges unless they are also granted to women. … Nine-year-old Samir faced the same choice Muslim boys and men encounter every single day: they are served dinner before women, given jobs denied to some, and allowed to enter passage-ways banned to women.’ (108). This epiphany combines with her observation that men and women could mingle comfortably and also pray together in Mecca: and she asks, ‘If men and women can pray together in the Sacred Mosque of Mecca, why can’t they do so elsewhere?’ (95) The family complete their pilgrimage by visiting the Dome of the Rock in Jerusalem before they return to America.

Nomani continues to describe her personal journey of finding her voice as a Muslim woman, an author and a single mother, back in America: and then the book concludes with the last two sections, Asserting the Lessons of the Pilgrimage, and Harvesting the Fruits of the Pilgrimage. These recount her efforts to be allowed to pray as a woman in the main section of the mosque with the men. This is the culmination of her experience during pilgrimage and her appropriation of her own voice in public forums. However despite the conventions of pilgrimage in Mecca, Nomani encounters aggressive opposition when she tries to do the same in America. She suggests that conservative attitudes are growing in American mosques. At the same time, she encounters support for herself and her position from a number of Muslim women and men. This part of the book helps the reader understand the cost of seeking reform within the Muslim community, and the opposition faced by those who seek to do so.

As an autobiographical account, the book is an easy read. It is valuable in taking the reader into an insider view of lived experience of making the pilgrimage, and also of challenging a conservative diaspora position of practised Islam. It shows the tensions and identity struggles of Muslim children growing up in the west, between two worlds, two sets of expectations and rules of behaviour. This includes relationships with their parents, even ones as accepting and supportive as Nomani’s parents, in their roles negotiating faith, life and work across two cultures. And the book demonstrates the diversity of positions it is possible to occupy on practices of life and faith with the one Muslim community. I recommend it particularly (but certainly not exclusively) for those interacting with the Muslim diaspora.