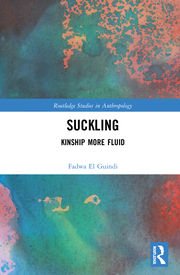 This book is an anthropological discussion of kinship, and the place that breastfeeding contributes to it, particularly within the Arab world. Fadwa El Guindi is an Egyptian-American anthropologist, and this book relates to research carried out when she was working as Professor of Anthropology at Qatar University. She suggests a new look at the conversation around kinship, beyond the traditional classification of kinship by blood (consanguinity: Arabic nasb) and marriage (affinity: Arabic musahara).

In particular this book looks at kinship conferred through suckling (Arabic rida’a). El Guindi points to the Qur’anic verse which specifies relationships through suckling among those which are included in incest prohibitions (Al-Nisa’ 4:23). She reminds us of the avoidance behaviours required with men who are not included among maharim (related, non-marriageable) men, described in the Qur’an in An-Nur 24:31.

The book begins by introducing some of the debate around kinship among anthropologists, and draws on Egyptian mythology, Muslim customs around death, and Arabic terminology to ask more about how the understanding of kinship might be constructed. Further discussion around the idea of ‘milk kinship’ in different groups leads into a description of research in Qatar around kinship relationships conferred through breast-feeding, noting that these relationships, and the behaviours required, extend both vertically and horizontally beyond the immediate pair (the woman suckling and the child suckled).

The book continues by describing a fascinating situation where a woman was seeking to adopt a child in the place of her son who had died. She had stopped lactating by the time she sought to adopt and so was unable to breastfeed him herself. So she got her husband’s sister to suckle the boy; and she and her husband travelled so that he could also be suckled by her husband’s daughter (from an earlier marriage): both these women had just had children and were lactating. Through them becoming foster suckle-mothers to the boy, she gained the relationships of both paternal aunt and grandmother to the child she was adopting. This ensured that she could rear him herself without the avoidance behaviours required with non-related males, such as having to veil in his presence as he grew up.

While adoption is not common or legal within Islam, it does occur. El Guindi also notes the presence of ‘grafting’ (iltiham) strangers into Arab tribal systems. However, tellingly, the person incorporated in this way does not share in group honour. And adoption does not move the person from non-maharim status, thus still requiring avoidance behaviours around them. However by contrast, suckling confers kinship status, including incest prohibitions (children of the suckling woman are forbidden to marry the suckled child).

The significance of kinship in the Arab world is evident from the author’s description of how it “accounts for everything and provides order to all relations. It also guides social life, obligations, duties, hierarchies, estate, employment opportunities, reputation, marital links, power, and so on.” (p.61).

An important contribution is El Guindi’s note of the relationship between kinship and ritual, recognizing that biological procreation is always accompanied by cultural rituals at key times including birth and marriage, giving official status to the relationships. Thus kinship is both biologically and also culturally created / affirmed. El Guindi uses the example of the Egyptian ritual seven days after birth, and a wedding ritual among the Zapotec in Mexico, called ‘waltzing the turkeys’. In this way rituals function to “draw the boundary of who is kin and who is not, and to reveal the process of transforming some kin into other kin.” (p.140)

Suckling then “is a highly regulated, well-calculated means of incorporating kin. It has a transformative function in kinship relations, it constructs new links, creates new relations, transforms existing ones, intensifies and interlocks kin relations, prohibits some relations and creates others. It categorizes and re-categorizes kinship by birth and kinship by marriage.” (p.142)

In writing style, the book is wordy and often repetitive, which can at times make it difficult to read. The author effectively questions Western constructs as the basis of theory, drawing on Arabic language, the Qur’an and famous Muslim medieval sociologist Ibn Khaldun, to offer an alternative framework.

El Guindi draws a distinction between wet-nursing and the ‘suckling’ relationship: however it is unclear on what basis she is making that distinction. Her book also focuses on the Arab world. This is appropriate as her data comes from ethnographic research in that area. At the same time, she makes clear that while the suckling relationship as formative of kinship does not originate within Islam, it is endorsed by the Qur’an and hadith within Islam as a legally-binding relationship. Given that, the question is how this relationship functions in other Muslim, non-Arab societies. This begs for further research around this fascinating topic.

The book is a valuable contribution to kinship theory within anthropology. And it examines a phenomenon deeply rooted in the women’s world: only women have the power to confer this relationship. Once given, its legal, relational and behavioural implications are lifelong.

The price of this book is prohibitive: you’ll probably need to borrow it from an established library (or get it on Kindle). And the reading can be challenging. However if you can get to it, it is a worthwhile read, drawing our attention back to breastfeeding, something which can be lost in the intimacy of women’s domains, yet is highly significant in its social implications.