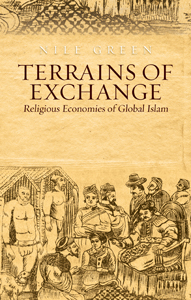 This book is a historical look at the impact of missions in stimulating religious innovation and organization in their competitors – other religions, particularly Islam. Nile Green, the author, is Professor of South Asian History at the University of California, Los Angeles. He uses a micro historical approach, following the actions of and interactions between individuals to explore the different fields. Green argues that the growth in new movements in Islam and other religions around the world was directly fueled by the growing activities of evangelical mission associations in the early 1800’s.

The book explores this premise by offering us the viewpoint of ‘exchange’ between different ‘firms’ (religious organizations) and individual ‘entrepreneurs’ (missionaries, preachers, middlemen), as a lens to view the growth and activities of both Protestant Christian and also Muslim and other religious movements and missions. It suggests religious change and innovation is the product of interaction between different groups and individuals, whether cooperative or competitive, an interaction or exchange that leads to adaptation and innovation.

Evangelical missions, with their commitment to Bible translation, were pioneers in developing print faces for different languages scripts. Through following in detail the interactions and networks between British professors, mission leaders and their Muslim assistants in the translation and typesetting projects, Green shows how many of these assistants were able to take the skills they had learned, both technological and multicultural/multilingual, into becoming entrepreneurs and middlemen for their own governments and religions, introducing printing presses into their own countries, and producing Islamic tracts and printed and later translated Qur’ans. Other technologies which were taken up and used in communication were steam travel enabling movement across continents and oceans: and new forms of organization, including missions, Sufi brotherhoods and voluntary associations, which challenged older established religious movements.

The book begins in the period of growth of Protestant groups in the early 1800s, suggesting that “with their efficient mechanisms of raising funds, deploying technologies, training personnel and distributing ‘product’ (particularly printed books), the Protestant missions were true multinationals of faith that adapted the financial and managerial techniques of commercial imperialism to build a parallel empire of Christ.”(281) It continues through to the early 1900’s with the responses and activities of Muslim and other groups. Starting in Britain, in ‘Oxbridge’ and London, the geographies of the seven case studies which he explores include Iran, the Caucasus in the borderlands of the Russian empire, India (Aurangabad and Hyderabad), through to the United States and Detroit, and Japan and the city of Kobe.

A famous example Green cites is that of Karl Gottlieb Pfander (1803-65) who began his work in Shusha in the Russian Empire with the Basel Evangelical Missionary Society, then worked with the Church Missionary Society among Muslims in India. Pfander’s book Mizan al-Haqq (The Balance of Truth) was originally composed in German in 1829 and published in Persia in Shusha in 1835, after having been printed in Armenian in 1831. He was helped in its translation into Tartar by Mirza Farukh (d.1855), one of those multicultural middlemen, who was born an Armenian Christian, but at the age of 6 was captured, enslaved and raised as a Muslim until the death of his captor. Farukh returned to his Christian faith and worked as a Tatar Turkish and Persian translator with Pfander, also travelling and preaching with him regularly. Pfander reprinted Mizan al-Haqq in several Persian editions and then in Urdu from Calcutta. The book generated so much opposition “that it spurred a whole generation of Muslim scholars into founding their own counter-organizations against the Christian missions and into producing their own books in response, such as the Izhar al-Haqq (Demonstration of Truth) by Rahmatullah ibn Kahlil al-Rahman (1818-91).

In this book men are the only actors – there is barely a mention in the footnotes of sister organizations, or the role of women in voluntary associations. This reflects the perspective of most of the written sources of the time (and some today), but also points to the need for further exploration and analysis in this area. It is densely written, but worth persevering with, as the author explores in detail the interactions and networks of exchange across religious organizations, and within communities as new movements and mosques are funded (Detroit and Kobe) and religious entrepreneurs gain influence within and beyond their own religious communities. Scottish Bible printers interact with Iranian emissaries: Japanese businessmen become the clients of an internationally linked group of Indian merchants: a wealthy Hindu businessman makes a pilgrimage to an impoverished Muslim former soldier turned holy man.

The book takes us beyond the ideology and theological narratives of religion, to demonstrating its interaction with ‘empire’ and also industrialization and commerce in and across countries. It shows that the growth in ‘global Islam’ was in fact a multiplicity of different movements across the world, some in sympathy with similar movements and others in direct competition.

The author views religion as a way of gaining social power, influence over the minds and hearts of people and communities. This perspective helps us see the influence of international “hybrid twentieth century religious firms as the Muslim Brotherhood and Tablighi Jama’at” at the expense of older religious ‘establishments.’ (285-6) Green concludes with the interesting suggestion that if more interaction between different religious groups leads to more innovation, then increasing travel and interaction around the world will lead to more religious entrepreneurs and firms seeking to appeal to “the changing religious demands of an unsettled and expanding world,” resulting in a world in which we see increasing religion rather than less.

This book helps us to re-read history. In doing so we are enabled to look more closely at the impact of what is happening now in evangelical mission and how it is received and interacted with, and becomes in turn the source of adaptations and innovations in its host religious communities.