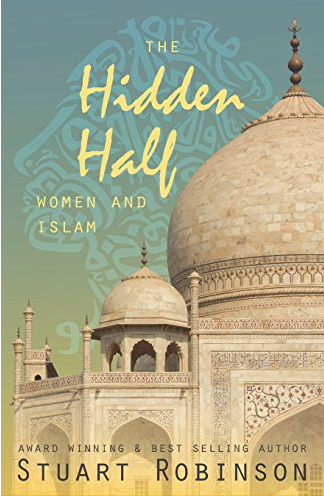 Stuart Robinson states that he spent fourteen years in South Asia and since then has continued to travel through Muslim countries. The Hidden Half consists of fifteen chapters ranging from four to fourteen pages in length. Robinson doesn’t want to ‘sensationalize’ but ‘simply records widespread practice’ concerning women and Islam, for ‘readers to draw their own conclusions’. However the particular examples chosen inevitably suggests to the reader that these incidents are typical of Islam everywhere. The book relates examples of practices around birth, female genital mutilation, marriage and clothing, sex slavery and rape. The phrase ‘In Muslim societies’ (p.122) is followed by generalised descriptions, with apparently no recognition of variation in a community that comprises 1.8 billion people, and without regard to difference in geography, class or education. For example, in contrast to the description of the ‘tragedy’ of a girl’s birth (p.12, and again p.122), in some parts of Indonesia, the largest Muslim country in the world, the birth of a girl is celebrated more than a boy.

Considering Robinson’s background in Muslim countries, there is surprisingly little reference to personal experience – perhaps linked to his advice to men if they see a Muslim woman to “pass on by without initiating any sign of recognition” (p.139). Most of the examples on which the book is based are drawn from media and Internet sites. Given that popular press seeks sensationalism rather than rigor, it is a challenge for the book to go beyond this.

A number of statements require more careful examination. In chapter two Robinson cites a book based on the four schools of Islamic law claiming that ‘circumcision is obligatory for both men and women’ (p.18). However only the Shafi’i school declares it a duty for both. Hanafi and Maliki say it is commendable for both, and Hanbali requires it for boys but only advises it for women. While the practice of female genital mutilation is widespread in some Muslim countries, in other Muslim countries there is no evidence for it. And it is also widely practised among some Christian communities, including sub-Saharan tribes. Another example is Robinson’s assertion that four male witnesses must testify to rape (p.89). However he later describes Afghan law as only requiring three witnesses (p.119). The founder of the Shafi’i school rules that “in matters connected with women such as childbirth” women can bear witness without the testimony of a man being required. Ibn Taymiyyah (on whose teachings Wahhabi Islam is built) also agreed that “if in a place of bathing only women are present and something punishable by hadd (rape, adultery, etc.) takes place then the case will be decided on grounds of women’s testimony alone.”[i]

The absence of wider data also means that it would be easy to assume from the book that the disturbing practices described are typical only of the Islamic community.   Yet if one was to follow Robinson’s example of citing widespread incidents across the whole geography and history of a religious population, nearly all his examples might be found in other religious groups – even, disconcertingly, in our own – for example, child marriage in the United States.[ii]   Domestic violence has been highlighted in Islam and also other communities in Australia, including within the church and even among clergy wives.[iii]  Australia continues to be a significant centre for trafficked women.[iv]  And rape has been used extensively as a weapon of war, including ‘Christian’ soldiers of Muslim women.[v] The recent #MeToo movement has shown up how deeply assault of women is embedded into western community. This is not to trade stories or statistics, but rather to note that pointing to the flaws in other societies requires honesty also about what is happening in our own communities. Lord Cromer offers a stark example. As the British colonial administrator in Egypt, he had no hesitation in naming the treatment of women as the major failing of Islam. At the same time, he restricted opportunities for Egyptian women to be educated, and was a founding member and sometime president of the Men’s League for Opposing Women’s Suffrage in the United Kingdom.[vi]

Some of the voices of Muslim women are included, and of women who have moved out of Islam. There is no mention of those women and men who are courageously seeking to bring about change within Islam and Muslim communities: in this book activists such as Karima Bennoune and those she writes about are hidden from the reader.

While Robinson grants that some of these practices may be widespread, the most serious assertion of the book is that they are supported by Islamic authoritative texts. Some of these texts are referenced in the chapters, and I was looking forward to more discussion of this material. In chapter thirteen, rulings from sixteen sources are listed. The first several are a mix of Qur’anic verses and traditions, with the last few sources regional fatwas, ISIL regulations and a verbal response to a journalist’s question. Again, there is no mention of the plethora of books that have emerged in the last decade by Muslim women grappling with Islamic texts and their interpretation: nor of the growing piety movement among Muslim women worldwide, who are rereading the Muslim texts from a conservative women’s perspective. Neither is there reference to Sisters in Islam and their work in textual interpretation and historical Islamic jurisprudence in order to promote gender equality, justice and freedom within Islam.

The final chapter points to the hope Muslim women find in Jesus. But there is little description of what that hope looks like practically in the contexts it describes.

The book cites real examples and asks real questions. However the lack of a wider context means that what is presented is a caricature rather than a balanced picture of the place of women in the Muslim community. Ironically, while the writer critiques Islam for what it does to Muslim women, apart from a few cherry-picked examples, the voices and stories of Muslim women have been overwhelmingly silenced in this book.

[ii] Child marriage has a long and vibrant history in the United States. While activists have long urged legislators to raise the age of consent to marriage – and continue to do so – with parental consent it remains possible for minors to marry in every single state.

[iv] 1000 trafficked women are working in the sex industry in Australia at any time with around 300 women trafficked into the country each year.

[v] Estimates of victims of religious rape by Serbian soldiers range from 20,000 to 50,000. Most of the rapists have since faced no prosecution or punishment but many of the victims still regularly see their rapists in the local neighbourhood. https://www.independent.co.uk/news/long_reads/bosnia-war-rape-survivors-speak-serbian-soldiers-balkans-women-justice-suffering-a7846546.html.

Rape was formally recognized as a ‘weapon of war’ by the United Nations in 2008, now so widely used that one commander suggests “It has probably become more dangerous to be a woman than a soldier in an armed conflict.” Kristor, N.D., WuDunn, S., 2010. Half the Sky.  Turning Oppression Into Opportunity For Women Worldwide. Alfred A. Knopf, New York, p.84.