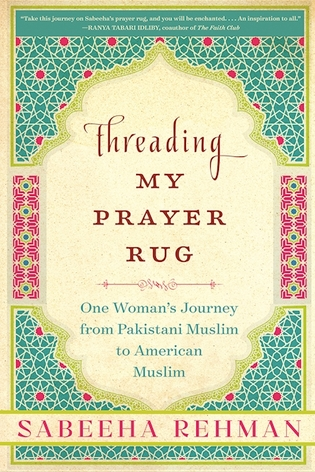 “Threading my Prayer Rug” is a very engaging and honest autobiography by a new author.  Sabeeha Reman describes her life from the time of her arranged marriage in Pakistan, aged twenty in 1971 and her married life in New York until the present time.

She invites the reader into her family and thought life as if speaking to a trusted and honoured guest, taking time along the way to explain customs and terminology with warmth and humour.  Her experience as a mother and wife, a twenty five year career as a hospital administrator and decades of involvement with interfaith dialogue provide valuable insight into the elements of change that have shaped her, as well as her family and community life.

Her purpose in writing the book seems to be twofold. The first purpose is to encourage the Muslim reader who may be experiencing culture shock as a new migrant in a western culture to find a renewed identity in their Muslim faith. The second purpose is to welcome the non–Muslim reader into an understanding of Muslim community by providing a vision of how national identity can still be shared even if religious identity is different.

There are valuable insights for the Christian reader into the worldview of a Muslim migrant. Identifying with the experience of culture shock and understanding the complex feelings that accompany it, helps us understand the catalysts for a series of identity changes that Sabeeha made over many years.

The opening chapters recounting her hastily arranged marriage to a Pakistani doctor living in the U.S.A initially seemed flooded with excessive detail. However, the detail was used to bring to the foreground the massive cultural differences that existed between Pakistani and US culture in a hilarious way that left me wanting to quickly read on.  Her “dizzying confusion,” during the early years of living in New York led to her feeling that “my identity was slipping away.” The feelings of betrayal of her Pakistani culture and fear for the future of her children were all revealed in a way that grew my understanding and compassion for the migrant experience.

Her feelings were shared with her husband, both living as Muslims in America during the Nineteen Seventies. They felt compelled in their isolation to build a strong Muslim community with Mosques, Muslim “Sunday schools” and renewed Ramadan practices around a faith community that was stronger than what she had experienced in Pakistan.

Sabeeha states that her primary motivation to introduce Islamic rituals into their family life was not religious belief, but rather to assist the children develop a security in their own identity.

She reveals a respect and humble acknowledgment for the role of the Jewish and Christian Americans in helping her know how to adjust her identity and examine the practice of her own faith. Sabeeha shares openly some of the practices of Islamic tradition that she questions as she searches for the elements of Islamic truth that could be lived out in a modern context.

Sabeeha, her husband Khalid and several other families eventually became confident enough in their own identity as American Muslims that conflict over a women’s issue led them to initiate a new community and Islamic school that “preached tolerance and inclusivity and was unencumbered by cultural baggage from the old country.”  The process of refining important values required courage and persistent hard work and is described by Sabeeha with great honesty; recording both the hurt of conflict but also the satisfaction of providing the nurture of the values they wanted to create in their children.

The book provides insights for Christians living in a Western culture where people from many other nationalities migrate. The strong need for belonging and community is something that many westerners fail to provide for the new migrant when their need is the greatest. The insights into the ordinary life of a Muslim woman as well as the impact of massive change told in such an honest and reflective way makes this book highly recommended reading for anyone who cares for migrants and a developing national identity within their own country.

Michelle Lim is an Australian Physiotherapist living in Sydney who enjoys friendships with migrant women from many nations. She is involved in a weekly playgroup and English language services as a volunteer and is interested in helping Australian Christians understand and enjoy genuine friendships with their Muslim neighbours. Michelle holds a BAppSc Physiotherapy (Sydney University) and DChSt (Mary Andrews College).