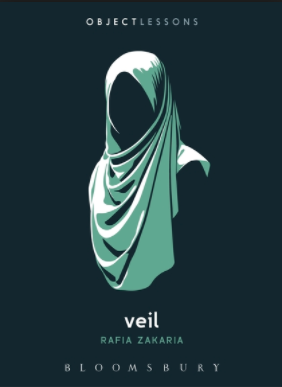 Veil is a short and densely packed book in the ‘Object Lessons’ series, which seeks to present an in-depth analysis of a variety of everyday objects. The author of Veil, Rafia Zakaria, is a Pakistani-American journalist and activist who has also written a book titled The Upstairs Wife: an Intimate History of Pakistan. The purpose of Veil is to present the veil as multidimensional object, one which is used, or not used, in a variety of ways for a variety of reasons. Zakaria does not attempt to directly unpack the theological arguments for or against the use of the veil in Islam. Rather, she presents case studies, a number of them personal, which she then uses to examine what the veil represents, what possibilities it conveys, and what constraints it brings. Zakaria wants the reader (Muslim or non-Muslim) to see the veil as an object, rather than as a “moral delineator.”

While the book is about all types of veil, from headscarf to burka, for a number of her case studies Zakaria focuses on the full-face veil (either the niqab or the burka).[i] Veil is divided into five chapters: Submission; Purity, Necessity, Unity; Rebellion; Feminism; and Submissive or Subversive. Each chapter explores the key ways in which the veil provides women with a presence and a being, yet simultaneously a non-presence and a non-being.

The most readable parts of the book are those which are personal accounts of Zakaria’s journey with the veil, describing times when she’s worn it, times when she hasn’t, and times when she wished she had. As her analysis of other case studies deepened, however, I found I had to work harder at understanding what insights she was drawing. Grappling with Zakaria’s analysis, however, is well-worth the effort. One of the meanings of the veil which stood out to me was that while the veil can demonstrate a wearer’s submissiveness to cultural and religious norms, it can also provide a wearer with a cover (both visible and symbolic) for acts that are culturally and religiously unacceptable (such as prostitution, or illicit meetings with male admirers in a public space). Another fascinating insight is that the invisibility provided by the veil alters the power dynamic, giving some control (over men, over the public space) to women who may not otherwise have it. Zakaria shows how women use the veil for protection—from censorious gazes, from harassment, and in situations which feel threatening (e.g. when surrounded by men, or when faced with one’s abuser in court)—while at the same time she agrees with Sara Yasin that the veil, no matter what kind, cannot protect women from the stares of men.[ii] Zakaria states that the veil “presents a way of being, but not necessarily interacting, with the space and its challenges.”

As well as covering these themes, Zakaria takes the reader on a journey through three main constructs of the veil as it has been viewed by Westerners. The veil as an object was, in the colonial period, at first considered exotic. The goal of colonial photographers and writers was to penetrate the forbidden female domain of the harem (and by extension, veiled women in the public space) and to ‘unveil’ the women, both literally and symbolically. After 9/11, notable feminists and feminist organisations used the veil as a symbol of repression that women in Afghanistan had to be liberated from – despite those same women issuing a statement pointing out that simply ending the mandatory wearing of the burka is not indicative of women’s rights and liberties there. Finally, under the War on Terror, the veil has become a symbol of subversion and suspicion, a political object that is used on all sides to project power and propaganda. Interestingly, Zakaria argues that while European countries which have banned the veil have ostensibly done so for security reasons, they are actually trying to control the aesthetics of the public sphere. While there are Muslim countries (such as Saudi Arabia and Iran) which mandate the wearing of the veil, two other Muslim countries, Egypt (where a ban on the burka was proposed) and Morocco (where the burka has been banned), have tried to change the way different kinds of veiling practices are viewed. In doing so, they are attempting to wrest power and legitimacy from extremist groups and reassert the state’s right to shape veiling practices.

Zakaria challenges the reader to be more aware that much of the world today values visibility, presuming that visibility is good, and that visibility signifies power and control. Thus the veil, as an object which can eliminate that visibility, can surprise, perturb, and disconcert. In the face of our visceral reactions to the veil in different contexts, and in the face of simplistic assumptions about veiling or the imposition of our own ideas or frameworks upon it, Veil asks us to step back and to recognise that we can’t see the choices, experiences, and considerations behind the wearing, or not wearing, of the visible veil. Instead, we need to allow women to speak for themselves, to listen to them, hear their stories, and understand their choices. As Zakaria concludes, we also need to recognise the veils (masks) our cultures (our Christianity? we ourselves?) operate behind; veils which cannot be seen as easily as the visible object, but which also inhibit our ability to really see.

[i] The niqab is a full-face veil that leaves the eyes uncovered, while the burka covers the whole face and body, leaving only a mesh screen to see through.

Previous Post
Women, Islam and Identity: Public Life in Private Spaces
Next Post
Women in the Qur’an, Traditions and Interpretation