Women in God’s Mission. Accepting the Invitation to Serve and Lead. 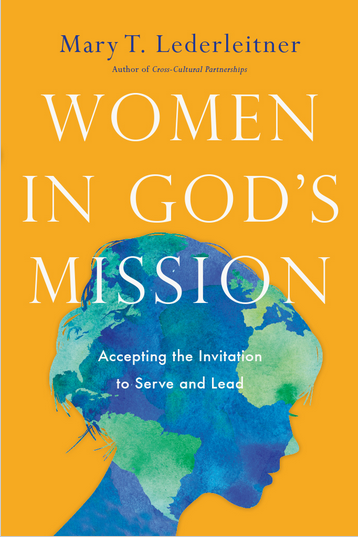 Women in God’s Mission. Accepting the Invitation to Serve and Lead.

Title: Women in God’s Mission. Accepting the Invitation to Serve and Lead.

“God constantly pulls many of his daughters into roles of service and leadership they never fully imagined,” (6) comments Mary Lederleitner in her introductory chapter to this book. Mary is an experienced researcher and missions leader, whose role has included working with Wycliffe Global Alliance in international leadership for two decades, and teaching in Trinity Evangelical School and Wheaton College. In her book she seeks to bring the voices and experiences of women into the global conversation about service and leadership in God’s mission. As part of her research, she interviewed ninety-five women leaders with diverse roles, who were from thirty countries, western and non-western. Her breadth of subjects makes this book relevant for both women and men across a variety of organisational, theological and cultural contexts.

The final chapter includes further details on the research methodology and questions. At the end of each chapter there are a few discussion questions, which make it useful to read as a group, or in further reflection.

The book is divided into four parts.

Section 1: Appreciating their Stories, begins by introducing the author and the women whose stories and comments are in this book. Mary specifies early that the book doesn’t espouse a particular theological position, but rather surveys how women are reaching out and leading in diverse contexts and theologies. Hence “the word influence is important because in the midst of diverse contexts and cultures many formal roles and positions are less available to women because of their culture.” (16) While theological and cultural analyses of leadership and gender are needed, they are not developed here. Discussing how women need to learn to navigate power and influence as opportunities appear or disappear, Mary notes that while men often have linear trajectories in leadership, ‘The paths for women are frequently more diverse because of the needs of loved ones and expectations their communities have about what they can and cannot do because of their gender.” (24-5) She explores the challenges of leading authentically – particularly when leadership is often viewed in male terms.

Section 2: The Faithful Connected Leader, describes the distinctive traits and characteristics of faithful leaders, and goes on to discuss of the value of collaborative leadership. This is often noted as a characteristic of women’s leadership: and the chapter gives a helpful range of examples of contexts and ways of leading collaboratively. Mary draws on transformative learning theory to reflect that it is how people make meaning of, or respond to an issue, not the issue itself, that determines whether it is transformative or deformative. (89) In reflecting on perseverance, one respondent comments: “God doesn’t put things in your path to trip you up. He puts things in your path to help you continue on the journey.” (88) The section concludes with describing the women’s passion to make an impact – both culturally and personally – and to seek excellence.

Section 3: Realities of Gender Discrimination, begins with a description of some of the challenges of being involved in leadership as a woman. It makes poignant and painful reading, including examples that we have all encountered personally. It is followed by a description of strategies that different women have found helpful in diverse contexts, in accommodating opposition, or responding when accommodation hinders faithful service. These are examples, rather than being advocated as the best strategies, or an argument against addressing gender discrimination. Accommodation strategies include some gems such as putting difficult people at the top of your personal prayer list: and choosing forgiveness over bitterness. The section concludes with a discussion of the potential risks and losses when choosing whether to name gender discrimination, deciding to leave, or to fight.

4: What women need to do their best work. The list describing the characteristics of husbands who can help married women flourish, like other lists in the book, can risk being read as a ‘checklist’ to pass or fail, rather than descriptive. A discussion of workplace relations helpfully suggests a move from the view of women as temptresses to ‘sacred siblings’, so that women aren’t marginalised from meetings or mentoring. A chapter on the importance of advocacy, and men advocating for women, could have been helpfully developed into the importance for all of us to advocate for those with less voice than ourselves, whether on the basis of gender, race or ethnicity, or socioeconomic status. Encouragement and growth are considered in the context of some of the different ways that women and men interact. Mary describes different shapes of mentoring – by men, women, and in communities. And there are further practical suggestions around flexibility, the needs of women in different contexts, planning conferences and meetings. Page 195 is a summary of advice for executive teams and boards in becoming more welcoming for women leaders: a friend of mine has already sent that page to leaders in her mission.

Mary’s final chapter challenges the reader to seek to flourish and help other women to flourish in faithfully serving God. She reminds us that the real measure of success is our faithfulness to God and courage in living his unique plan for each of us.

The book focuses on gender. There are many other situational constraints, some mentioned in the book, that can limit what opportunities are open to us. These may include our race or ethnicity, socioeconomic background, health or family circumstances. This book does not ignore the challenges, but goes beyond them in asking how we live in taking up the opportunities in front of us – to not be constrained by bitterness, or restrained by timidity, but to say yes to what God is inviting us to, because “no other response is appropriate.” (34)

Previous Post
Excellent Daughters: The Secret Lives of Young Women Who are Transforming the Arab World
Next Post
Psalms: An honour-shame Paraphrase of 15 Psalms