Women in the Qur’an, Traditions and Interpretation 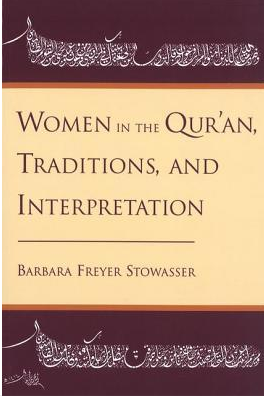 Women in the Qur’an, Traditions and Interpretation

Barbara Stowasser’s book is a challenging but very useful read. It may be helpful for Christians working with Muslim women, with its wealth of Qur’anic information, to begin conversations. Stowasser looks at accounts of women in the Qur’an and the Hadith (traditions), investigating both traditional and modern views. She identifies different ways the medieval Hadith is read and understood. She explains some socio-economic and political implications, and addresses the honour/shame paradigm.

Stowasser begins by identifying the Hadith as both authoritative and normative in character. It is a record of both the way of life of the early Muslim community in Muhammad’s lifetime, and of post-Muhammadan processes of Islamization. It operated on several levels at once, including historical, political, social, and cultural realities and aspirations.

Many Islamic academics responded to tensions between Islamic cultural authenticity and foreign colonial/ neo-colonial views, in several ways. They either defined and defended Muslim accounts or articulated variations on the conservative views, in response to criticism from foreign entities.

The medieval Hadith was clear to original audiences, playing an important role as a framework for religious self-understanding. However, parts became unintelligible to later generations, contradicting the social order it describes and prescribes. So elimination and reinterpretation of these materials has occurred.

Stowasser’s goal is to explore some of the specific stories of women as they appear in the Qur’an, and some Bible-related traditions. She investigates stories of Eve, and the wives of Noah and Lot. She looks at Abraham’s wives, women in the life of Joseph (Zulaykha), and Moses, and Bilquis, the Queen of Sheba, and Mary. These women represent diverse dimensions of the female, in the history of God’s interaction with humankind. They span wickedness to righteousness, betrayal to loyalty, and idolatry to faith.

Interestingly, of all of sacred history’s female images, Hagar’s story has undergone the most ongoing change and interpretation in Islamic traditions and imagination. The Qur’anic figure of Zulaykha (Joseph’s wife) exemplifies some of the richness and subtlety of the Qur’an’s lessons, around Zulaykha’s weaknesses and strengths. Stowasser maintains exegesis can only partially explore these – while many readings of the Qur’anic text are possible, the text is greater than the sum total of its many readings.

Stowasser looks at the traditions of the Prophet’s wives, who are known as ‘the mothers of the believers’. The Hadith views the Prophet’s domestic household as perfect. His wives were models of righteousness, to be emulated. They are paragons of virtue domestically, and soldiers who fought for the establishment and protection of Islamic values. Over time, views of the prophet’s wives have changed, so that they are now seen as precedent-setting models for all Muslim women. There are repeated statements of the importance of collective order and well-being. Qur’anic stories of Mary have a multiplicity of meanings for men and women, both in scripture and interpretation. Significant themes emerging include segregation, quiet domesticity, modesty/invisibility through veiling, ascetic frugality, and devout obedience to God and to his prophet. The historical origins of seclusion help us to understand the religious and social factors impacting the Islamic view of women.

The hijab/covering issue has been much debated between Islamic progressives and conservatives. The core meaning of hijab has undergone a semantic shift, from societal segregation and invisibility of women, to a garment or portable veil. Educated and working women choose to wear this as badge of moral and cultural authenticity, which allows them involvement in the previously excluded public sphere. European colonialism attacked the hijab as an obstacle to Muslim progress defined in Western terms. Middle Eastern conservative Muslims’ response was to redefine traditional institutions around women, as the core of Islamic authenticity. Modernism’s response sought legitimate change on these issues, within the paradigms of Islamic scriptures. The hijab became an option, with a spiritual, ideological, and social dimension.

Polygamy in the Qur’an is viewed as a response to necessity. It is seen as an honourable and compassionate system, because it protects the older, sick, or barren wife from divorce. And this ensures progeny for the man who may take a second and subsequent younger and healthy spouse. It solves the practical issue caused by war, where there are not enough men to ensure marriage and motherhood opportunities for all females. Further, it is viewed as superior to Western monogamy, where extra-marital sexual liaisons are tacitly permitted. Each of these are significant factors for an honour and shame society.

The medieval theme of female weakness, powerlessness and jealousy has been replaced by a modern one of a lively and loving spouse. The transformation of manipulative jealousy from a negative to a positive aspect of the female psyche, fits in with the widespread and increasingly influential modern Muslim typology of the Prophet’s wives, as soldiers who fought for the establishment and also the protection of Islamic values. The modern interpretation of the Hadith sees the Prophet as the perfect husband, so all of his wives found honour and happiness with him, which no other monogamous marriage could have entailed (p.131).

Ideal womanhood came to mean constancy in worship, charity, with the woman living for the husband’s contentment, and bringing up the children by herself in order to free the husband for participation in jihad. By ‘staying in their houses’, Muslim women keep the family united and strong. They ensure the survival of a moral society, based on the values of self-control, dignity, and pride, courageous defence of Islam against unbelievers, knowledge of the doctrines and laws of Islam, and wise counsel in religious matters.

Why read this book? To understand, through encountering the Qur’anic statements regarding women, Muslim attitudes to women and their role in society. These issues continue to be a source of confusion and controversy in both the Islamic and the non-Islamic world. And they continue to have enormous impacts on the everyday lives of women.

Deb Sugars worked in student and parish ministry, mainly in Melbourne, for three decades. She has a background in Social Work. Since training at St Andrew’s Hall, Melbourne, she and her husband are now sharing the gospel and training leaders at a large international church in Dubai.